The Islands of Mauritius Will Take Your Breath Away A republic of five volcanic islands 1,134 kilometers (705 miles) out in the Indian Ocean east of Madagascar, and with a population of 1.3 million, Mauritius is one of the most gorgeous places you can visit, and known especially for its ethnic as well as ecological diversity. Here's a quick rundown of its islands and what each has to offer: 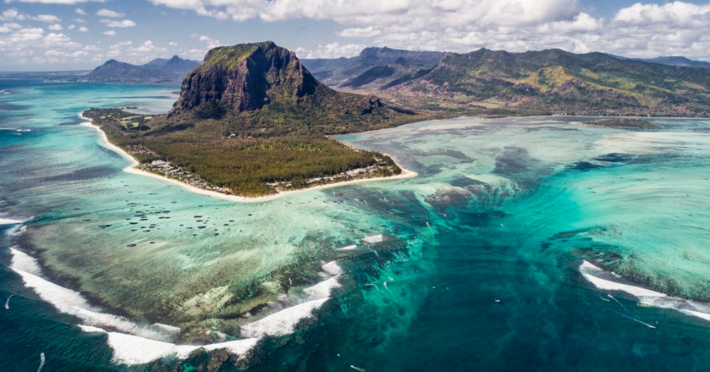 This country's main and most populous island (top and above), home to its capital Port Louis (pop. 147,000) and international airport, is the perfect colourful destination for the one who want to enjoy diving and snorkeling on the world's third largest coral reef; swimming and surfing its turquoise waters; sunbathing on its 160km (90 mi.) of beaches; and capturing its spectacular landscapes in photography. Rent a car on Mauritius island - just 65km (40 mi.) long and 45km (30 mi.) wide -  to discover the many enticing sights and adventurous experiences it has to offer, especially the forested, mountainous interior with its rustic, quaint villages. The coastline, meanwhile, is home to more than two dozen luxury resorts as well as a variety of smaller hotels and guest houses.

And one especially noteworthy corner of this island is Le Morne Brabant (above), a peninsula at its extreme southwestern tip with a cave-riddled 556-meter (1,824-foot) summit which spans 12 hectares (30 acres) and has 3.5km (two mi.) of hiking trails as well as its own microclimate - a great place to get an eye-popping view of the offshore "underwater waterfall," an optical illusion created by silt falling between two coral reefs. It's no wonder it was declare a UNESCO World Heritage Site (awarded not only due to its natural attributes but also its historic/cultural importance as a 19th century refuge for escaped slaves). 
Located 560km (350 mi.) east of Mauritius island, tiny Rodrigues (108km²/42 sq. mi.) is full of sandy beaches - some 20 of them. You can also enjoy meeting giant tortoises at the François Leguat Giant Tortoise and Cave Reserve, home to over 3,000 of these extraordinary creatures. Hike nature trails; visit villages whose inhabitants farm, fish, raise cattle, and make an indigenous form of traditional folk music called Sega Tambour; and enjoy the outdoor pursuits including wind and kite surfing, ziplining, and scuba diving. This turns out to be many visitors' favorite Mauritian island! These outer islands very different from the others, and are barely inhabited; the two islands of Agalega have barely 300 residents and the nearly 40 sand banks and islets of St. Brandon atoll an even smaller handful (and mostly non permanent) scattered across several settlements. Options to explore include sunning and swimming on pristine, white-sand beaches; snorkeling with sharks, giant sea turtles, and other tropical fish on its coral reefs; witnessing Green and Hawksbill sea-turtle nesting and spawning; and on Agaléga watching the locals engage in the main "industry" here: harvesting coconuts.

Speaking of coconuts, on the "Isle of Two Coconuts," a five-minute boat ride from Mauritius island, is a luxury-resort isle centred around a beautifully restored, century-old villa, and is also home to the Blue Bay Maritime Reserve, a fantastic place to enjoy sport fishing and being wowed by beautiful corals and various underwater fauna via snorkelling, scuba diving, and glass-bottom boat. An extraoridnary experience for an overnight or a day trip.