In February 2009, Martinique and its sister island Guadeloupe took an unaccustomed turn in the world's headlines with heated general strikes over inequality and the cost of living, resulting in the first ever cancellation of Martinique's Carnival. The poobahs in Paris responded by raising salaries and other concessions, President Nicholas Sarkozy paid a conciliatory visit last summer, and things pretty much returned to normal.

So when I headed down to check things out a couple of weeks ago, I found the same calm, beautiful island and friendly people that have earned Martinique something of a following among some Caribophiles. This overseas département of France is less pretentious and far more accessible and down-to-earth than St. Bart's, yet sports the same kind of French flair, small resorts and fabulous eating, while at the same time arguably being more interesting as an island. And now there's finally even a decent hotel (see below) right in the capital, Fort de France (right). Another welcome bit of news is that getting there is now more convenient, since a American Airlines inaugurated a direct flight from Miami in April 2013.

Now, if you remember your history, it just might ring a bell that one of the Caribbean's most traumatic natural disasters (and the 20th century's worst volcano eruption) happened here in 1902, when Mount Pelée blew its top, burying the nearby town of Saint-Pierre (below left). Today the rebuilt town makes for a pretty picturesque sightsee, with some historic architecture in addition to a small museum devoted to the eruption and some preserved ruins, including the jail cell that saved the life of one of the event's three survivors. Too bad that more than a century later, jitters about another eruption keeps the place so economically stunted that it's only last year that a hotel opened in town, the nine-room boutique Villa St.-Pierre.

Of course, turn-'n'-burn beaches are still Martinique's main draw (absolutely do not miss Les Salines down south), but Saint-Pierre's just one of the groovy spots to see and do things that could have you criss-crossing this lush, hilly 436 square miles for days on end. On that list I'd include: the rum trail, some dozen distilleries of varying size which accept visitors and offer tastings (I visited the smallish, family-owned Neisson (below, left) up near the town of Le Carbet, as well as the former Clément distillery, which has been turned into one big, interesting museum); the ruins and museum on La Pagerie, the one-time sugar plantation where Napoleon's Empress Josephine was born (they kinda hate her guts hereabouts because she talked him into re-establishing slavery); and the Caravelle Peninsula, a national park with the atmospheric ruins of another sugar plantation, Château Dubuc, and a trail leading to the world's highest-altitude lighthouse. 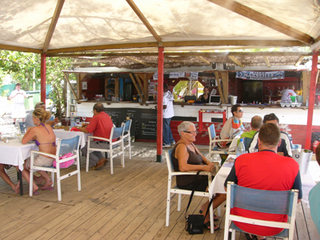 And did I mention the grub? Mon dieu, so many great places to get fat, from the casual-elegant Fleur de Sel down the road apiece from the resort town Trois-Îlets to the casual-casual, Palladino-family-run creole eatery Le Colibrí Parfumé up in Sainte-Marie. But my most memorable meal was at the unassuming beach restaurant Le Petibonum in Le Carbet (right), including swimmingly fresh seafood and an absolutely exquisite rum soufflé, served by raffish local Guy Ferdinand, whom my table dubbed "Chef Hotpants" because under that apron he sports a pair of short denim cutoffs ("You have to have the legs for it," he explained). And despite being home to the Caribbean's first Club Med, Les Boucaniers (Buccaneer's Creek), Martinique has kept its resorts cozy and the big-ass, all-inclusives out. My favorites include beach resort Cap Est (a creole-meets-contemporary Relais & Chateaux); Le Plein Soleil nestled amid banana-planted hills; and the gorgeously restored, 36-room period inn Le Domaine Saint Aubin. All of them, naturally, are worth a visit even just for lunch or dinner. As for the capital, Fort de France, it's a funky bit of business that has several interesting sites and museums, plus a fascinating produce and spice market with some tasty and inexpensive local lunch joints. But at night it's admittedly dead, and nearly the only bunking options are backpacker-style places such as the Carib and Bayfront hotels. If you're curious to spend a night, though, the place to do it is at the newly revamped L'Impératrice, where there's a good restaurant, a snappy little café downstairs with live music and 29 rooms now stylishly tricked-out in multicultural themes.

One downside — if you want to call it that — to Martinique (besides the so-so shopping) is that the English ... eh, how you say ... she is not so widely spoken. That's one reason (as I told a local TV reporter interviewing me about how to bring more Americans) why the island is really geared more toward those willing to push his or her comfort zone. But take it from me: the rewards are, as they say in French Creole, magnifik.

I'm impressed with how much you saw on your recent trip to Martinique. One thing you didn't see (you couldn't, because it hasn't opened yet) is the five-star, 17-suite Hotel French Coco that will open this summer adjacent to the national park on the Caravelle Peninsular. Introductory rates start at about $400, including breakfast, and I think this hotel will provide a top-of-the-line alternative to (the excellent) Cap Est.