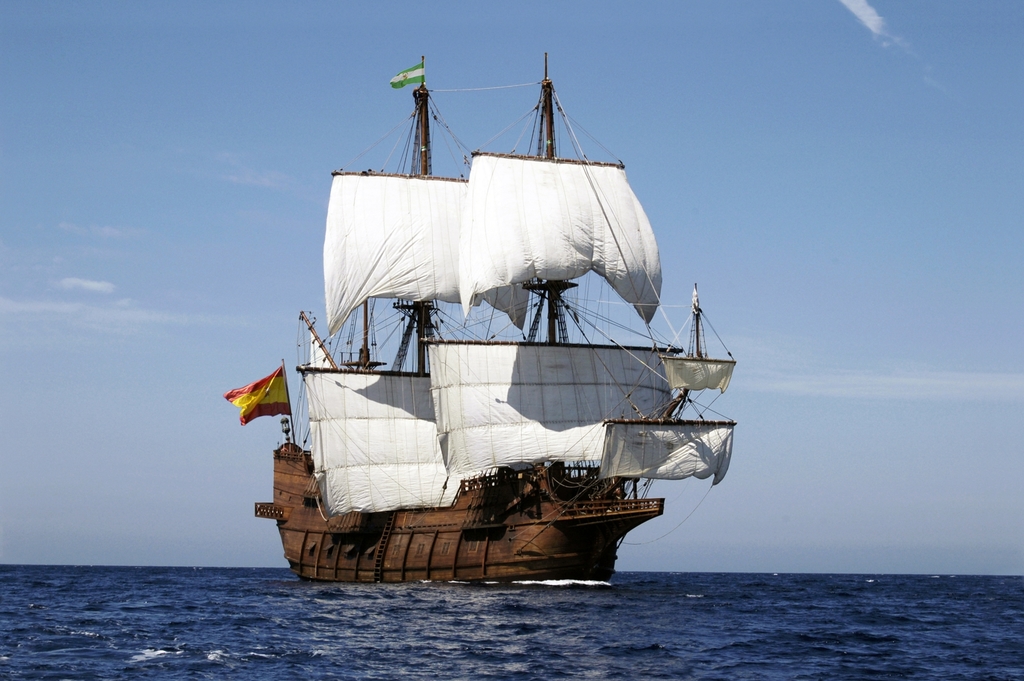 I’m standing on the deck of a mighty wooden treasure ship, 170 feet long and 495 tons, watching tourists amble and poke about – but I admit, in my mind's eye I’m picturing pirates, sailors, and skeezy, barnacle-encrusted zombies from Davy Jones’ locker slashing, parrying and whizzing through air filled with flames and cannonballs.

Forgive me, I’m afraid that over the years, the Pirates of the Caribbean franchise has wormed its way all too far into my head. But enough - a shake of the head, and I can’t help but be impressed at the achievement here, this magnificent Spanish vessel, its brave crew, and the vision behind all of it. And of course the reason it’s here in Miami, Florida: to commemorate the landing near what is now St. Augustine 500 years ago by  conquistadores under Juan Ponce de León, famously in search of the “fountain of youth” and eventually the Florida colony’s first governor. A faithful replica of an actual 17th-century galleon, El Galeón was built in 2009 by Seville-based foundation Fundación Nao Victoria. Beginning in late January, a crew of 36 men and two women sailed it more than 5,000 miles from the Canary Islands to Santo Domingo (a 17-day journey), then Puerto Rico before docking this past Monday at downtown Miami’s Bayfront Park, where it’s welcoming the public daily 9am to 5pm through Sunday, April 28 before continuing up the coast toward St. Augustine. Granted, admission won't exactly be considered cheap by everyone (adults $15, ages 12 and under $8), but I’d have to say worth it for a glimpse at a rare beast such as this, and chat with its crew about what it’s like to sail across the Atlantic Ocean by the winds and the stars.

Well, almost. Crew spokesman Manuel Minero, 27 (right), took me into a room behind the ship’s wheel, and what do you know, there was a radio, some nav equipment, controls for in-port motors, and other newfangled gewgaws. Partly for backup, partly for modern-day nautical regulations, and partly, said Manuel, “because maneuvering into port now is very different and needs to be much more precise, than simply weighing anchor back in the old days.” Belowdecks, in addition to a recreation of how the captain’s and aristocrats’ quarters looked (left), there are also displays, set up by the Sunshine State’s tourism board, Visit Florida, relating to sailing ships and Spanish exploration, especially as they relate to Florida – there’s even a film about the Galeón and its construction.

Manuel also took me behind the scenes into the quarters of today’s crews (hey, is that an expresso maker in the galley there?). It’s hardly luxurious, actually – I was especially impressed by the bunk room, which reminded me of a cross between a hostel and a capsule hotel (and smelled more like a hostel, actually, if you get my drift). In the old days, original crews would’ve numbered 100 to 150 on a ship this size, but it was just 38 people – ages 21 to 68 – who took the Galeón across the ocean (fortunately without incident) and 25 who will take it up the Florida coast.

What an adventure – and in a world of ever more extreme adventure-seekers, this is all the more meaningful for being tied to a fundamental bit of history that helped create the world we live in.

- The Cove at Port Canaveral, Cape Canaveral: Wednesday, May 1 - Sunday, May 12