A Visit to Maastricht, Netherlands ‘Have you come for the concert?’ asked our taxi driver, as he took to our hotel from the station. He explained that, every year in July, Maastricht was packed tight with people who had come to see the André Rieu Homecoming Concert.

‘The man’s a genius!’ he went on ‘If it wasn’t for him, this town would be nothing’

I’ll agree wholeheartedly with the first part, but I’m not sure if his second opinion is a general one. Although I would say that, if not for the concert, I wouldn’t make a special trip there, although it’s a pleasant place to spend a day or two if you’re passing through to somewhere else.

We liked Maastricht from the moment we stepped down from the train, and entered the elegant railway station. I think it’s the first one I’ve ever seen with stained glass windows!

After we’d checked into the hotel, our first task was to find lunch. Not a difficult task; the Markt, or market place is lined with outdoor cafés, bars and restaurants. You just sit down at a vacant table, and see which one the person who comes to serve you comes out of. So, I’m afraid I don’t know the name of the café where we had a beer and a toasted ham sandwich … and wondering whether the beautiful lady who sat two tables from us was soprano Carmen Monarcha. 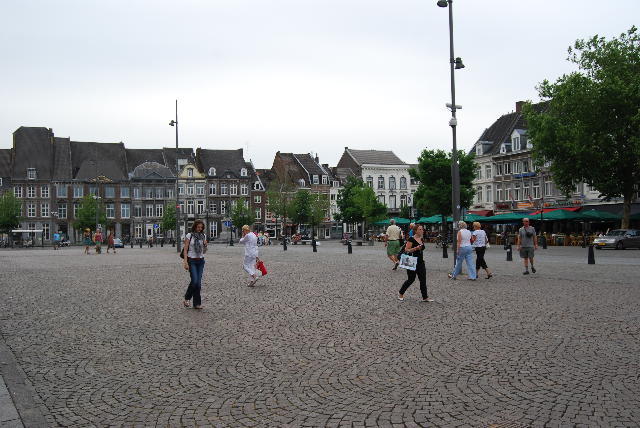 Every fifteen minutes, the music of a carillon marked the quarter-hour, and a statue guards the entrance to the Markt. 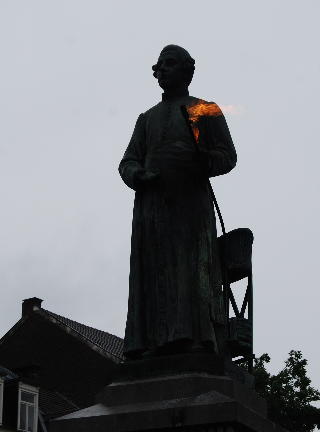 It was; the statue, holding a flaming torch, is in tribute to Jan-Pieter Minckeleers, a Maastricht native, who invented the gaslight. And, he’s even more spectacular in the dark.

Next, to the Vrijthof, the square where the open-air concert was to be held the following night, to ensure we could easily find the way there. It’s tree-lined, and again, there are many outdoor cafés from which people can watch the concert … and I’d guess the residents of the apartments above the cafés have many friends at this time of year.

The churches of St. Servatius and St. John dominate the square; just two examples of the splendid architecture of Maastricht.

One of the best ways to orientate yourself when you’re in a new place is usually to take a bus tour. Most places use open-topped double-decker buses, but in Maastricht, they use a traditional American school bus; surplus, I suspect, from one of the many US military bases in Europe.

Stiphout, the firm that runs these tours, also run the river cruises. We took one that afternoon, and found nothing whatever to complain about. There’s a good selection of cruises available , ranging from a 20-minute trip up the river to the St. Pietersberg caves to longer trips to Liège or Vise. We took the cruise up to the caves, and found the boat well turned out, with the woodwork highly polished. There's a large, comfortable lounge, in which we had a beer, and in which meals can be served on some cruises. They gave a commentary in Dutch, French and English, and the whole thing made for a pleasant experience, at a reasonable price.

The boat lets you off at St. Pietersberg, and you can get on a later boat which will take you a little further along the river before turning round and returning to Maastricht. Our main reason for calling at St. Pietersberg was to visit the caves. Caves such as this can be found over most of Limburg province. But, they aren’t natural; they’re limestone mines, some of them dating from Roman times, from which most of the stone with which Maastricht is built was won..

One of the properties of limestone is that it hardens on exposure to air. So, for building purposes, it’s better to mine stone from underground rather than from an open air quarry. Stone got by this method is softer, and more easily cut, but will harden after use. You’d think that artificially-hewn caves wouldn’t be very interesting. There are no stalactites or stalagmites, although we were told that one had been carved many years ago; it fell down shortly after it was finished. And, no doubt, its creators realised that to make a proper stalactite takes several millennia.

The mines were used as a place of refuge by the people of Maastricht during sieges or other troubled times, and there are one or two reminders of such usage. The most recent are water tanks and cooking stoves, dating from World War II, when they were used as an air raid shelter.

The main attraction is the cave art, to which several artists made a contribution. I have a theory that the miners made first drawings, in order to identify their position in tunnels which were otherwise featureless, and easy to get lost in, And, of course, they make the Sint Pietersberg caves much more than just a hole in the ground. I’d tried to arrange a visit to the Apostelheuve winery, which is near here. I’d discovered their product earlier in the year, which was the first I knew there was such a thing as Dutch wine. Unfortunately, the winery was closed to visitors for refurbishment at that time,

But, on the slopes of St. Pietersberg, we found a vineyard, claimed as the oldest in the Netherlands.