Trading Insults with an Angry Lion EcoTraining wilderness camp, Mashatu, Botswana, Thursday 12 January 2012, is a day that will be etched upon my memory forever. I ran out of toothpaste.

Not life changing in itself, I agree, but it was the first in a series of interesting events that day which included having lasagne for supper (my favourite) and being charged by a lion.

Perhaps I should say a bit more about the lion thing. At approximately 06:00 that morning, a small group of us under the expert guidance of Chantelle chanced upon some large and very fresh lion tracks close to the Motloutse River just north of the east west ridge. Chantelle is the other half of the Brian/Chantelle combo that are the instructors at the EcoTraining camp in Mashatu. She has a black belt in Taekwando and has had more lion encounters than I’ve had parking tickets, no mean achievement since I live in central London!

Brian is a quiet and unassuming man who likes to take pictures of wild flowers. He’s also Taekwando black belt and holds a diploma in conservation management. Out here they are definitely the team you’d want on your side in a crisis.

Back to the lion…

Chantelle was lead, Graham at backup and Kelly, Kyle and I made up the rear.

A Large and Dangerous Male

We were all very excited to find the tracks and keen to follow them to their source. That this source was undoubtedly a large and extremely dangerous male lion that certainly wouldn’t appreciate our attention didn’t really impress itself upon me at the time.

Nevertheless, after about half an hour of tracking through the fever berry croton thicket, we heard the unmistakable heavy breathing of a sleeping lion somewhere very close by. We immediately went into silent mode and crept towards the sound. Emerging from the thicket at the foot of a gentle but barren slope, we spotted a large thorn bush directly ahead of us about 15 metres away on the top of the hill.

Suddenly a large male lion appeared to the left of the bush. Irritated at having been woken from his sleep, he emitted a bloodcurdling growl and began to snarl menacingly.

And then an absolutely text book response from Chantelle when she shouted “Lion! Stand still!” and chambered a round into her .458 rifle. “Get behind me. Hey! Hey! Hey!”

We did exactly what we were told without question. My heart was pounding in my mouth and my breakfast was pressing against my trousers.  But by now we were on automatic.

And then the Lion Charged...

Meanwhile, the lion, who hadn’t taken kindly to all this confusion, mock charged Chantelle, stopping only 10 metres from her before going back up the hill and charging again. Unquestionably the most unnerving thing about the mock charge is that you can’t differentiate from a real charge until the actual mock bit, by which time the lion is only a few metres away from you!

But Chantelle held her nerve and I was comforted by the fact that if her rifle jammed, she could probably kick it to death.

We all reversed back into the thicket and happily the lion didn’t follow us. After about 30-40 metres we turned around and headed away as quickly as possible. Only when we felt we’d gone far enough did we stop, ecstatically shouting and high-fiving.

Chantelle aside, it had been the biggest adrenalin rush of our lives. 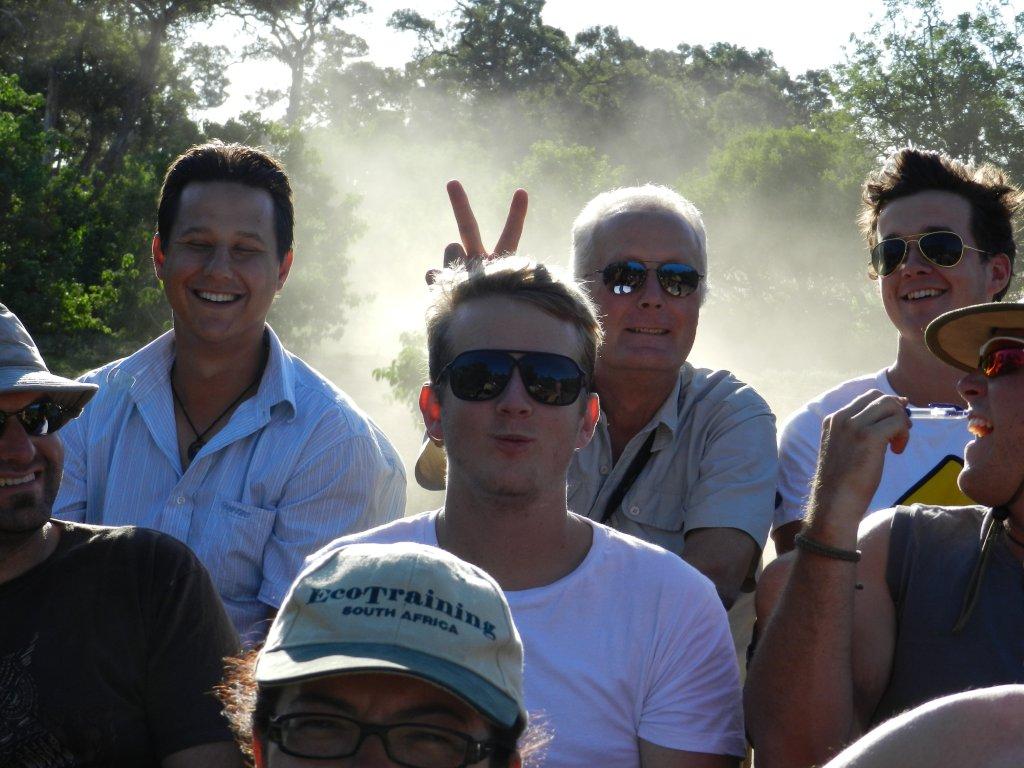 Article by Philip Dumas (One year Student at EcoTraining)

A little too close for me! wow. Glad to hear all were safe!

So - how did the shave cream work? lol

Wow ! I do not know if it was a miscalculation or intentional ? Was there a plan B if the lion did pounce on one of you'll. ?