California Dreamin’ in the O.C. - 24 Hours in Laguna Beach

Winter, spring, summer or fall - every day is a beach day in Laguna Beach

Since, the majority of my life has revolved around San Francisco and Northern California, where  the weather tends to be 10 to even 20 degrees colder than our neighbors to the south, any chance for a warm beach day has always been something that I cherished.  In my early days as a surfer in Santa Cruz, I have always been drawn to the California coast. So, when the Joie de Vivre-owned Pacific Edge Hotel invited me for a free nights stay in the artsy beach town of Laguna Beach, being already in Los Angeles, I jumped at the chance. Just what the doctor ordered, a break from Los Angeles.

When residents of other parts of the United States - or the world for that matter - think of California, the sun-drenched beaches of Southern California are most likely the vision that people portray. Tanned surfer boys and bikini clad girls line the seven miles of coastline of this laid back, yet vibrant enclave. Laguna Beach just may be as close to "California Dreamin" as one can get. It was going to be a quick trip from L.A.

Combine a vibrant artist colony, a food lover's dream, a surfer and beach community - what more could I want for 24 hours in paradise. The moment I parked my car on the Pacific Coast Highway, I was able to walk to everything that I  wanted to see.  Yes, my SUV was out of sight, and out of mind.  There was no problem wandering up and down the P.C.H. on foot. The Pacific Edge Hotel (above) an older property superbly revamped by Joie de Vivre, does not look like all that much from the outside, but looks can deceiving. Once you enter your room and absorb the brightly, pastel, colored walls, tastefully done decor, and see the views of the Pacific Ocean, the breathtaking sunsets, and views reaching out over 25 miles to Catalina Island, you know that you've arrived in Paradise. Joie De Vivre keeps the O.C. vibe alive with surfer themed digs creating a true “endless summer.”

My arrival was on an overcast day, but Rafael at the front desk assured me that at approximately, 1:30 p.m. that the sun would be out and the weather would be exactly 69 degrees and even get warmer, perhaps up to 73. I looked at Rafael with a little skepticism, but knowing California coastal weather, and especially  Southern California’s Orange County, the chances are high for 70 degrees and sunny. But sun or no sun, Laguna Beach is warm most of the year and one can enjoy swimming, surfing, paddle boarding, boogie boarding, or just diving under rushing waves of the Pacific.  My room had a king bed, a kitchen; and thankfully, a coffee pot and coffee. The Hotel is also pet friendly, so bring along Fido - or in my case, Magic.

I proceeded to hit the waves on the hotels beachfront, it wasn't the best day to surf, so I opted to paddle board. Then, I began my quest to meet the locals. I really enjoyed talking to them, and they turned me on to some great finds. If one grows up in 60- to 85-degree weather and lives right on a beautiful beach, one does live joie de vivre, la dolce vita, la vida loca - yes, Laguna Beach is clearly the good life. Chalk one up to Rafael - the sun did come out at 1 pm and when I looked up the Coca Cola temperature sign, it was 73 degrees.

One local by the name of Cody informed me that I was in luck as it was Wednesday. I asked, “Why am I lucky to be in Laguna Beach on a Wednesday night?” He asked me if I like lobster, and I replied, "who doesn't like lobster." I took his recommendation for dinner and walked down the street to C’est La Vie for the Wednesday-night $30 1½-pound Maine lobster special which also came with perfectly cooked al dente asparagus, saffron risotto, and a glass of California Chardonnay. For under $80 including tax and tip, you can have a lobster dinner for two. The restaurant also has a bakery and is a great place to buy croissants and pastries for your morning breakfast or dessert. Everyone likes a deal, and this was the deal of the day. 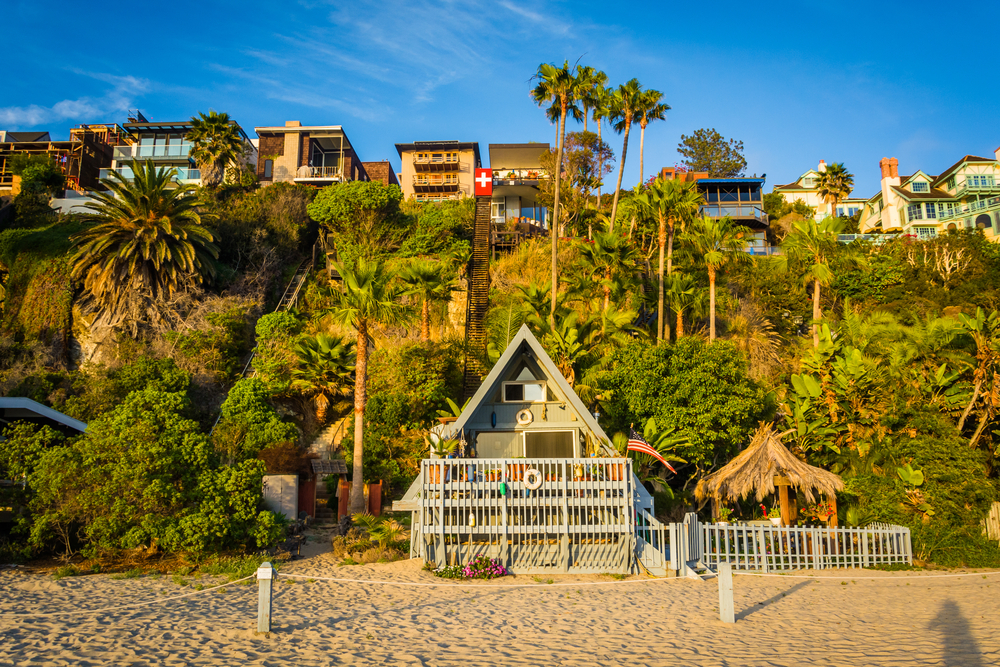 More than sufficiently stuffed with lobster, I headed out to Laguna Village to walk my meal off and found some great places to socialize. To me the greatest side of being a world traveler, is finding the unexpected, meeting the locals, and just maybe you’ll meet friends for life. Finding the locals, “Cheers”  I always look for a local watering hole to have a beverage or spirit of choice while making new friends. Some of the greatest travel memories are the ones where you simply meet locals at a bar, cafe, restaurant, out of the blue and I relish in the unexpected.

Brussels Bistro proved to the perfect place to sit down to two of my favorite Belgian Beers. : A Stella on tap sounded great about now. While there I met surfers Brent and Derek, two friendly locals who I proceeded to drink two Chimay , Belgian beers made by Monks in their Belgian Abbey. Any beer endorsed the men of the cloth, can’t be bad. In fact, Brussels Bistro many tasty beers on tap from all over the world.

The next morning, I got up, walked to Skandia Bakery and had a pastry and some coffee. Here you will find delectable pastries to cure any sweat tooth, Scandinavian and European pastries. As I walked back to the hotel, another friendly local recommended the best pizza in Laguna Beach, Gino's Pizzeria. I decided to make the best out of day by spending some more time in the water. Even though the day was cloudy and drizzly in the early morning,  the water felt very refreshing. Upon check  out I proceeded to the Quicksilver shop for some new board shorts and headed to Gina’s Pizza to have the largest slice I have ever seen. This $5.00 custom made slice was almost the size of a whole small pizza. I left Laguna Beach full and satisfied. Laguna Beach has quite an abundance of food, happy hour deals, festivals, and activities year round.

I will most definitely be back. It had been 16 years between visits to Laguna Beach. I will be back much sooner for sun and surf, and to discover most local bargains.

Life is good when you're "California dreamin."

Lumberyard 384 FOREST AVENUE-- Half dozen oysters on the half shell for $6.95

HOW TO GET THERE

About the Author : Nick Kontis - Founder of the World Travel list

Nick Kontis started out as a world traveler at an early age traveling back and forth between California to Greece every summer. But it was a back packing trip around the world at age 24 that proved to be a life changing experience. After traveling by car, train, , plane, bike and, boat around the world, it would be this trip of a lifetime that would lead to a life as a travel entrepreneur and world traveler. Nick has been on both radio and television. Featured on Arthur Frommer’s television show, and referred by Lonely Planet writers. Frequently mentioned as the “father of around the world airfares” Arthur Frommer once said, “If Jules Verne were alive today he would use Nick to go around the world in 80 days.” Nick and his various travel companies have sent over 10,000 people taking their dream trip through airfare discounts of as much as 50% off the airlines published fares. Now Nick promotes travel through his World Travel List and ‘Trip Rambler’ by World Travel List. Having traveled to over 80 countries Nick hopes to inspire others to travel the world.

We lived 16 years in the Bay Area and went to Santa Cruz and Carmel often. Moving to Los Angeles in 1987, we made annual visits to either Laguna Beach, Del Mar or La Jolla.

I agree that Laguna Beach is a wonderful, especially for foodies like us. For a small town it has a surprising variety of restaurants serving excellent food from many countries as well as California favorites. As you say, it is also a great walking city. You only need a car to visit the art colonies to the north or the beaches on the far south side.

We stayed at the Pacific Edge Resort under its previous management and also at aging Hotel Laguna. There are numerous other hotels ranging in rates from moderate to very expensive.