I've faced down grumpy hippos on safari in Botswana's Okavango, dodged camel spit on a trek in Mongolia, and kept my lunch down on a hurtling dogsled driven by ebullient Lapps. But hanging out with headhunters? Less adrenaline rush, maybe. But creep-out factor? Erk...

I was on the world's third-largest island (a bit over the size of Texas) as part of my visit to Malaysia, which shares Borneo with Indonesia and the entire sultanate of Brunei. And it was a far cry from Kuala Lumpur -- jungled, mountainous, and usually remote. The territory's (and island's) biggest city and jump-off point for the jungle is Kuching (pop. 630,000), whose name means "cat" in Malay -- and in fact, I found part of its colorful charm was the plethora of cat sculptures kitty-littering the city squares, even a kitschy cat museum inside a mosque complex. The people were friendly and prices were great -- most tourist-level hotels barely cracking $100 a night, and tasty meals rarely more than $5 or $6 a person.

But the main event hereabouts is to be found deep out in the rainforested wilderness that though decimated by logging still sprawls across the island's northern third: I was about to meet a tribe called the Iban, about a half-million strong, who lived traditional lives in some 2,000 longhouses. And about that "traditional" thing -- I know anthropologists and sociologists are always mourning the loss of cultural traditions. But I was damn glad the particularly charming Iban tradition of headhunting died out after World War II, when locals struck back at their Japanese invaders by beheading them. I have this thing, you see, about keeping my noggin attached to my shoulders.

In Kuching you can easily find tour operators that arrange visits to the Iban, and so after a 90-minute flight from K-L, the next morning at 6AM I found myself joining a group pulling out of town in a pair of SUV's. It was a four-and-a-half-hour drive through mile after mile of dense greenery, but roads were good. We overnighted at the enchanting Hilton Batang Ai (starting at the equivalent of just US$68 a night), ensconced on an island in the middle of a lake.

The next morning it was back into the car for another two hours into the jungle, finally halting along a narrow, muddy river, where the guide piled us into a wooden dugout canoe. Whooshing low in the water merrily down the stream (which occasionally broke into whitewater) under a light drizzle definitely felt a little Indiana-Jones-in-the-Amazon-ish -- or maybe it was more Apocalypse Now. I mentioned this to the guide, adding "but at least there are no piranhas, right?" A crooked grin. "Piranhas, no -- but just watch out for the crocodiles and water snakes." After that, I kept my hands firmly wedged in my lap. Good thing I wasn't told about the occasional capsizings.

We stopped once, at the Sepilok Orangutan Sanctuary, where trainers throw fruit to the wild simians in the trees. The varmints were raucous as always, of course, but at least this time they didn't attack ("don't worry," the guide said, "we haven't lost anybody yet."). 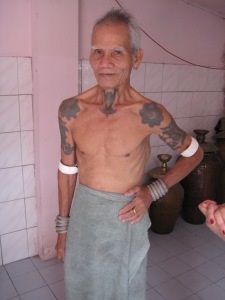 Finally, we pulled up near the Iban settlement, a grubby little clearing where 24 families lived along the corridor of a 160-foot longhouse. A couple dozen naked or near-naked kids were playing in the dirt, and here and there were men sleeping, in hammocks or under trees. Climbing up a rough-hewn ladder onto the longhouse's rickety floorboards, we were introduced to the 92-year-old headman, who didn't have a lot of teeth but did sport quite the wiry physique -- almost completely covered with blue tattoos. As we were introduced I couldn't help noticing over his shoulder a garland adorning his doorway; I've seen enough pictures to recognize shrunken heads. Hirohito's soldiers from WWII, the guide said (gazing in horrified fascination, I wondered how today's Japanese tourists felt about seeing these gruesome little buggers).

First we presented the village with gifts -- candy and chips we'd brought from Kuching. We were then treated to a little dance performed by the headman, the shaman, and other wizened oldsters; it consisted of a series of bizarre swaying motions and raising palms in the air, like something a child might come up with. Despite the fact that they were putting this on for tourists, this was no sanitized, ersatz set-up -- this was how these people lived. We were allowed to ask them questions about their lives; toured the longhouse and the chief's living space (which turned out to be porcelain-tiled, with a kitchen set right out of I Love Lucy); and sat for a simple lunch of steamed fish and rice (the extra-adventurous could opt to overnight in a curtained-off area piled with old mattresses, but that was, I admit, just a mite too "authentic" for me).

I left not just with my head still on my shoulders, but crammed with fascinating impressions. I couldn't imagine living like these Iban, yet after spending several hours with them it was easy to see how not so unlike we all ultimately are. After all, I've dealt with far more savage headhunters in the concrete jungles of Manhattan.