India's northernmost state is filled with flowers in springtime and snow in the winter, offering visitors in general and honeymooners in particular a raft of amazings sights and experiences, such as skiing in Gulmarg; marveling at breathtaking mountains lakes; trout fishing in Sonmarg; and enchanting cruises on cedar panelled houseboats on the Jhelum River. Amid its myriad landscapes - with lakes, mountains, gardens, deserts, Hindu, Buddhist, and Muslim places of worship, and various fascinating cities and towns -  there's an awful lot to see and do in Jammu and Kashmir. And here are the top dozen destinations I would suggest:

A town of more than 15,000, just a half hour south of the state's capital and largest city Srinigar (see below), Badgam is a reflection of the real Kashmir. It boasts a mix of natural areas like the fields of Yusmarg (see more details below) as well as  Doodhpathri, in thickly forested nearby hills, and historic sites such as the 16th-century Hari Parbat fort and lovely gardens including Shalimar Bagh, Chashma Shahi, and the Mughal Gardens.

In the northwest of Kashmir, with a population of around 71,000, this small city is even more ancient, its founding dated back to 2306 BCE. Besides Baramulla's various temples and shrines, notable towns around the city include Parihaspora (Kashmir's 8th-century capital and famed for its ruins from that era) and Gulmarg (set amid snow-capped peaks, known for its winter sports as well as the world's highest green golf course).The surrounding area is also wonderful for nature lovers, with spots like Manasbal Lake (especially alluring for bird watchers), Uri (a great place for a barbecue), Wular Lake (Asia's largest freshwater lake), and the Gulmarg Biosphere Reserve (also fabulous for birding, as well as spotting other fauna such as musk deer and snow leopards).

In the forested, stream-crossed foothills of the Himalayas 1,3613 metres up and a six-hour drive from the nearest big city, Jammu (see below), this town of 11,000 has an 18th-century fort as well as several historic temples. But Bhaderwah's greatest allure for visitors is without question its setting, ideal for both adventure junkies and nature lovers because of its varied and beautiful landscape of mountains, valleys, and fields - in fact, it's dubbed "mini Kashmir." All this makes it popular with trekkers, whitewater rafters, mountain bikers, and skiers.

Up 2,400 metres (8,000 feet) in the high Himalayas of Kashmir's far north, this onetime spur of the old Silk Road is one of the state's most beautiful valleys, with Dawar its central town, home to the Sufi shrine Peer Darvish. Out in the valley, adorned with waterfalls and little wooden villages, visitors delight in trekking, rafting the clear blue waters of the Kishanganga River, camping, fishing, and rock climbing. Just keep in mind that the road in is closed from November through May due to heavy snowfall (up to 15 feet!). So plan carefully - but Gurez is well worth it! Founded in the 9th century and with a population of around 576,000, Jammu is considered Kashmir's holiest city - dubbed the "City of Temples"- with sacred sites such as the Mata Vaishno Devi Hindu cave shrine, the Peer Baba Muslim Sufi shrine, Mahamaya, Peer Khoh (also in a cave), and the temples of  Raghunath (above) and Ranbireshwar. Other musts include roaming its old quarter, mid-16th-century sandstone Bahu Fort, the early-19th-century Mubarak Mandi and Amar Mahal palaces, Rani Park in the city's heart, Peer Meetha, Karbala, and the Nandini Wildlife Refuge.

Some 6½ hours southwest of Jammu, this town (pop. 14,000) does have a "sight" or two, such as the shrine of a 17th-century Sufi saint, but its greatest appeal is its setting, surrounde by soaring forested hills ideal area for hikers, wildlife spotters (the Kishtwar High Altitude National Park is home to innumerable bird species along with mammals such as the Indian Muntjac, Himalayan Tahr, hangul, and snow leopard) and rock climbers/mountaineers (with peaks 6,000 to 7,000 metres high). The area is also known for its saffron in the nearby Paddar Valley, as well as saffron fields.. And also be sure to have a dip in the local Tatta Pani hot springs!

Set amid snow-topped mountain ranges up in the far northwest (about an hour and a half from Baramulla), this town of 70,000 has anumberre of noteworthy temples and shrines such as the shrine to Muslim saint Hazat Mahmood, Kheer Bhawani, and Shaloora. Ainch Hill provides spectacular panoramic views of the Vale of Kashmir, and beautiful nearby Lolab Valley and its half dozen pretty villages are also well worth a visit. In Kashmir's northeast corner bordering Tibet - and itself largely Tibetan in culture - this onetime Buddhist kingdom in the Himalayas (top) was open to tourism only in 1974 and is still packed with Buddhist stupas, temples, and other holy places in capital Leh and elsewhere, such as Namgyal Tsemo Gompa (above) and Hemis and Thiksa monasteries. The natural side of Ladakh is if anything even more awe-inspiring; besides its towering, snowy peaks, the region is dotted with spectacular lakes such as Pangong as well as rushing rivers which have become increasingly popular for whitewater rafting. Add trekking, biking, mountain biking, and mountaineering, and it all adds up to a world-class adventure travel destination.

Only about 2½ hours east of Srinigar (below), this colonial-era hill station at an altitude 2,130 metres has barely 6,000 residents but is well equipped to receive visitors, especially because its Hindu Amarnath cave shrine is the object of a pilgrimage made every July and August by up to 600,000. The ecotourism and adventure allures of its surroundings also draw their share of visitors, including the romaing the breathtaking meadows of Baisaran; exploring the lush valleys of Aru and Betaab; trekking the Kohl Glacier;  and whitewater rafting on the Lidder River. 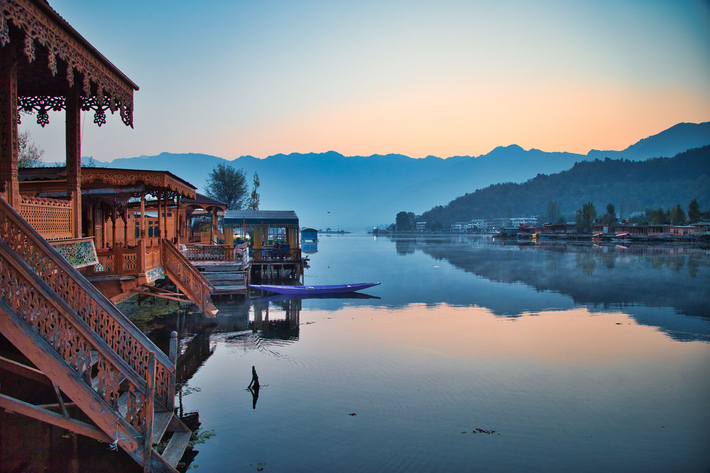 In the pine- and cedar-forested hills ocer the Shivalik Valley a 6½-hour drive south of Jammu, sights here include the Hindu Naag Mandir (Cobra) and Sudh Mahadev temples. and And those into adventure, among the top local draws are paragliding (which the town has become known for), rappelling, rock climbing, camping, and winter snow sports. On the less demanding side, there's hiking and horseback riding in the local fields and forests, as well as natural springs recognized for their medicinal  properties.

Founded in the 6th century, Kashmir's summer capital and largest city (pop. 1.2 million) is known for its natural environment, gardens, waterfronts, and houseboats. Highlights include a fort dating back to the city's founding; Dal Lake (above) with its gondola-like boats, stationary houseboats and India's only floating market; colourful bazaars; and a number of historic Sufi shrines and Muslim mosques. As Srinigar will most likely be your point of entry into the state, by all means take advantage by staying a couple of days or so to see what it has to offer!

Located on the Doodganga River (also romanised as Dudh Ganga) in an alpine valley some two hours' drive south of Srinigar, this tiny hill station has just one fairly basic lodging and nothing in the way of "sight" per se (though it's well worth a stop on the drive down at the 14th-century Sufi shrine Charar-e-Shariff), but what draw people here is its stunning natural environment. The main activities are hiking and horseback riding to local beauty spots such as lovely Nilnag Lake; the Sang-e-Safed Valley with its perpetually frozen lake; and the lush meadows of Lidder Mad and Haigin. In short, Yusmarg offers a bucolic escape from hectic urban life!