I’m probably unique in that I visited Jordan twice before I saw Petra. My only excuse is that, on the two previous occasions, I was there on business. But, this time, I was on holiday, and determined to see this ancient city, which features high on everybody’s ‘must see’ list. The year was 2003, and things weren’t too stable in the Middle East. Things were quiet in Jordan, though; King Abdullah had just stated ‘Just because there is a riot in Boston doesn’t mean I shouldn’t go to Cincinnati’. Better still, entry to all attractions was half-price to visitors. Even so, we had the places almost to ourselves.

We were travelling with Nyazi Tours, and the party consisted of just me, my wife and our guide, Adeeb al Hasanat. Adeeb dropped us at the Crowne Palace Hotel in Wadi Musa the previous night, and, in the morning, a young man presented himself, and introduced himself as our guide for the day, Adeeb’s brother, Sami.

Since our visit, Sami founded his own tour company, Jordan Inspiration Tours, (www.jitours.com) with an office right outside the entrance to Petra.

Petra was built by the Nabataeans, who were a nation of merchants and traders, living in the 6th Century BC, in the southern part of what is now Jordan. They built their houses in a rather unusual way. Where anyone else would make mud bricks to build their houses, or quarry blocks of stone and take them away to build a city, the Nabataeans simply dug out caves in the soft sandstone of a narrow canyon.

People who have never been to Petra often recognise its Treasury, which featured in the movie ‘Indiana Jones and the Last Crusade’. This building is right at the entrance of the city, which we approached down a narrow side canyon, called the siq. ‘It’s best to walk’ said Sami ‘You can get a horse, camel or carriage back if you wish!’

That was good advice, for there’s much more to Petra than the Treasury … and it will take a long time to see it all. Almost all the city is still standing after 2,600 years, not just one or two buildings. Even a day isn’t long enough … although that’s tiring enough. On the way down the siq, Sami pointed out the clever system of drainage channels, which provided fresh running water almost everywhere in the city, and protected it from the danger of flash floods.

Living in caves suggests a primitive people, but it wasn’t the case here. Many of the buildings in Petra are as grand as many modern buildings. There’s even a Royal Palace. And, we stopped to admire the Qasr el Bint, or ‘Castle of the Woman’ which was believed to be the only building in Petra not to be hollowed out from the cliff.

Sandstone is a reddish colour, which shines brightly in the sun, causing poet Dean Burgon to describe Petra as a ‘Rose Red city, half as old as time’ … words often repeated in tourist brochures. But, it’s not all red … there are many different colours, and craftsmen make souvenirs for visitors by pouring differently coloured sands into little glass bottles, so as to form pictures and patterns. The books say that a Swiss explorer, Johann Ludwig Burckhardt, who also found the gigantic rock temple at Abu Simbel, in Egypt, discovered Petra in 1812. However, ‘discovered’ maybe isn’t the right word, for the Bedouin people have always lived there, until fairly recently. Indeed, Nyazi Shaba’an, who was Director of Antiquities at Petra for many years, and now owns the tour company we were travelling with, was born in one of the caves, and his earliest memories are of riding his donkey through the ancient city to school.

And Sami himself was born in a Bedouin tent nearby.

Some of the caves still house shops and restaurants, although nobody lives permanently in Petra now. We stopped at one restaurant, opposite the open-air theatre, for a cup of tea, and remarked on how cool the interior of the cave was.

Sami told us that when the people were rehoused elsewhere, one old lady refused to move. She said that she wanted to die in the home she’d always known. When King Hussein heard of this, he sent his brother, Prince Hassan, to visit the old lady, and try to persuade her to move. The lady presented the Prince with a covered dish, in which he found a dagger. She told him that she couldn’t disobey a Prince, so would he please kill her now.

Prince Hassan realised then how much the lady loved her home in the cave, so he told the authorities they must allow her to remain as long as she wished, and she stayed there until she died. So, maybe living in a cave isn’t as bad as it sounds? 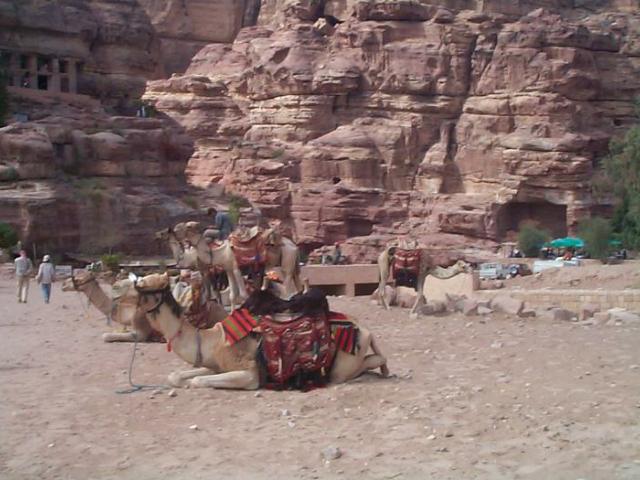