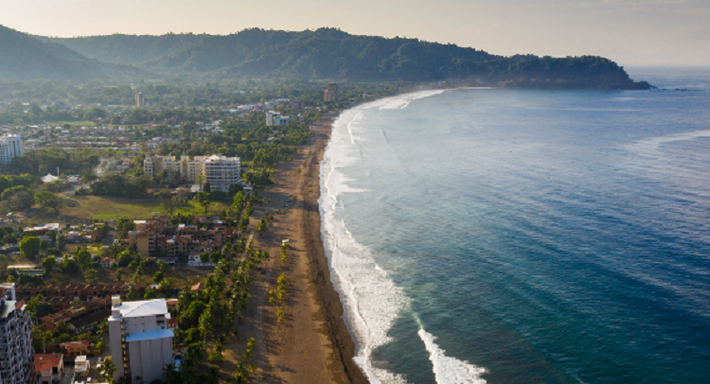 Costa Rica is famous among other things for for its Caribbean and especially Pacific beaches. And the place that started the beach-tourism boom back in the 1980s - because it was closest to capital San José, about an hour and a half drive away on the central Pacific coast  - is still one of the most popular. A town of around 10,000, bustling Jacó is centred around a 2½-mile volcanic-black-sand beach popular with bathers and surfers alike, and as the country's most developed beach resort town offers a wide range of facilities and amenities - great dining and water sports; amazing nightlife; and a wide variety of lodging for every budget, including hostels, small hotels, larger resorts, and condo/villa rentals. (And by the way, that development also means good roads/streets, sidewalks, and parking spots - not always a given in many Tico beach towns.)

The climate is generally hot and humid, with averages temperatures in the dry season (December through April) in the mid-80s to low 90s Fahrenheit, and in the rainy season in the low 80s. The hottest months are March and April, while in from September through November you can expect rain - sometimes pretty hard - and in September also strong winds. (For more on weather in Costa Rica, click here.)

Things to Do in Jacó

The respectable local waves are good for beginning and medium-skill surfers, with plenty of surf shops and schools, while more experienced surfers also use it as a base for hitting the more challenging waves at nearby beaches like Playa Hermosa.

A popular local pastime - take a SUP tour or class.

Jacó is surrounded by lush tropical rainforests, mountains, and more than ten beautiful waterfalls - which you can explore on your own, but to get the most out of the experience, go with one of the reputatable outfitters in town. There's also a wonderful aerial tram just south of town which which takes visitors on a 90-minute glide through the rainforest canopy.

Two particularly cool rainforest destinations are within easy drives - reachable on your own or with a local tour operator. To the south, Manuel Antonio is the country's smallest but most popular national park, known for its beautiful beaches and hiking trails, while Carara to the north is famed for its dense rainforest and exuberant wildlife - particularly one of Central America's largest populations of scarlet macaws (a few of which, by the way, you can also spot flying around Jacó itself).

Jacó is very much famed as Costa Rica's premier party town, with plenty of bars, clubs, and live music. Some of the top venues include Le Loft, Isaga, Surf Dogs, and Orange Pub.