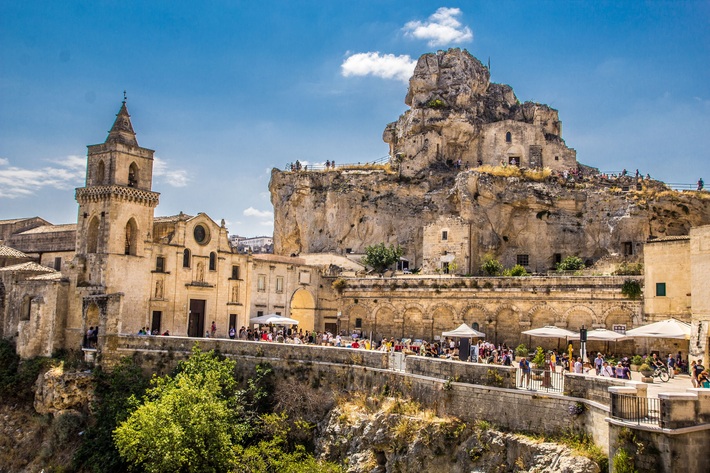 The last time I went to Italy, I chose the southern Adriatic Sea port of Bari - capital of Apulia (known as Puglia in Italian), the "heel" of the Italian "boot"  - along with two nearby resorts. Why Bari? Frankly, mostly because it's home to the famous Basilica di San Nicola - St. Nicholas - top left), and my name is Nicolae. There also happens to be a direct flight on the low-cost carrier Wizz from Timisoara, in my country Romania.

So in just an hour I was in Bari (pop. 327,000), and for 1.50 euros my companion and I took Bus No. 16 from the airport for the half-hour ride to Bari Centrale (also the city's principal train station) in downtown's main square, Piazza Aldo Moro.

The charming old quarter, Barivecchia, is a warren of narrow streets and passageways whose  outstanding landmarks including the 12th-century Romanesque cathedral (and a museum of excavated Roman ruins beneath it) and the also 12th-century Normanno-Svevo Castle, surrounded by a moat on three sides. But of course for me the main draw was blocky, limestone San Nicola, also considered Bari's top tourist attraction. Begun in 1087 and finished in 1197, it features several architectural styles, including a Romanesque façade, Baroque ceiling, 14th-century frescoes, and Byzantine-influenced details.

A particularly interesting detail about the basilica for me is that its basement crypt is used for masses held in Russian for Orthodox Christians - unique in the Catholic world and of which I am highly appreciative (my country is largely Orthodox); 95 percent of the worshippers were of course Russian; it's sometime of a pilgrimage site for the Russian Orthodox faithful; and the I remember women in headscarves remindeding me of the church I once visited in Chisinau, capital of Moldova.

And just a few minutes'  stroll along the waterfront from Barivecchia is Lungomare, a maritime  promenade said to be Italy's longest and grandest, lined with fishing boats on one side (come in the early morning to watch the local fishermen unload the day's catch) and bars, cafés, and restaurants on the other; at the end the city beach. There are several nice city beaches, as well, such as the Lido San Francesco, Mola di Bari, Pane e Pomodoro, and Torre a Mare..

Speaking of beaches, there are at least seven fetching strands just a half hour by train (tickets just 3.20 euros), so my next stop was the town of Monopoli (pop. around 49,000), where I installed myself in a great and well equipped apartment in the relaxed, untouristy, white-stone historic centre for four nights. And apart from the beaches and its own quaint old fishing port, the centro storico here is packed with old churches including a Baroque cathedral, and the pentagonal 16th-century fortress is also well worth a visit. It turned out I was also here also caught the day the annual Christmas fair opened, packed with visitors - 95 percent of them Italians - and noisy in the evenings, including vendors, entertainers, food for sale in stands as well as nearby restaurants and terrace cafés, and a generally festive holiday atmosphere.

All in all, a great holiday destination with a little something for everyone!