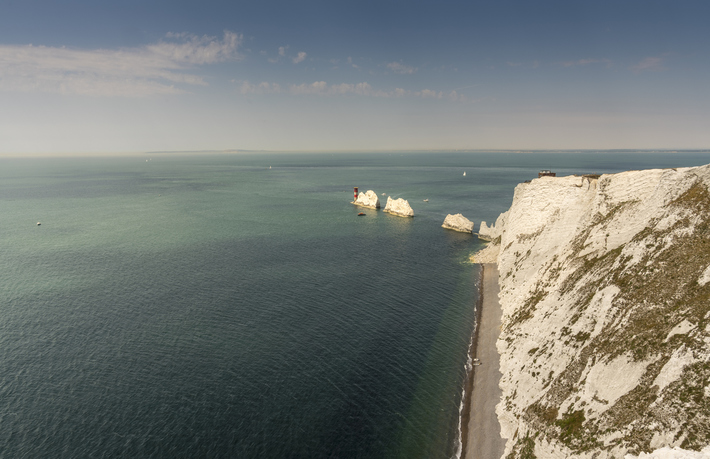 
After six months into the coronavirus lockdown experience, it was natural to want to leave our house in Stockbridge, Hampshire and travel a little - preferably to the coast, which is never far away in England. In fact, just 20 miles to the south lies Southampton where a ferry with your car can be boarded for the hourlong crossing to the Isle of Wight and its many attractions. And that is exactly what we did in October 2020.

England's largest island is just the right size for several days of sightseeing -  it's only 15 miles from north to south and 25 miles east/west, and is home to fewer than 150,000 people. It has also experienced very little coronavirus and was welcoming visitors, so it seemed a good candidate for exploration.

The Red Funnel Line is considered one of the most expensive ferries in the world (£9.50 per adult without a car, £24.50 or £41.50 with car, depending on fare type); however, we did get a 25-percent discount through our hotel, and it turned out to be a nice short ride down from Southampton waters across the Solent Strait to East Cowes on the island's northern tip.

Over several days we covered a good bit of the island by car (nowhere is more than a half hour's drive), including some of the various hamlets, villages, and towns beyond East Cowes and yachting mecca Cowes, such as inland island capital Newport, Victorian-flavored Ryde (the largest, with 30,000 residents), seaside resort towns Sandown, Shanklin (below), and Ventnor. Beyond just roaming these and wandering the coast and countryside, there are nearly three dozen " attractions" worth a visit. Highlights include more than two dozen of Britain's best beaches, from placid to surfy and tourist favorites to hidden gems; natural formations like the island's iconic chalk cliffs and jutting rocks (top), The Needles, on the west coast; history/heritage sites such as Osborne House (Queen Victoria's holiday mansion) in East Cowes and Newport's Carisbrooke Castle; and family attractions on the order of the Tapnell Farm Aqua and Farm Parks. In between all of that, there's plenty of fine shopping and dining. (For more, plus additional details on these, log on to VisitIsleofWight.co.uk). As for our hotels, we opted for two, with the first two nights at the 26-room New Holmwood Hotel in Cowes, located in the northernmost part of the isle at Egypt Point in Cowes. These days a Best Western, it's comfortable and traditional style, sitting right on the seafront looking across the Solent with exceptional views of the shipping entering Southampton Docks as well as yacht racing just offshore.  There are some parking spaces in front of the hotel and free parking in the nearby roads, althoughy ou might have to pay to park on the seafront.  The New Holmwood has comfortable well-appointed ensuite bedrooms with in-room tea/coffee-making facilities, but there is no lift and only a limited number of ground-floor rooms.  The staff were friendly and helpful and managed the Covid-19 restrictions well, with clear guidance for social distancing.  Rooms were not serviced, though replacement towels, tea, coffee and so forth were left outside the room on request and meals in the dining room had to be pre-booked.  There was a good choice of cooked or continental breakfast options and a wide-ranging dinner menu offering popular and well-cooked meals.  Altogether a pleasant stay, and good value for money.

The second two days were at the Seaview Hotel, in the northeastern village of the same name, a a well-established independent hostelry very near the water (though views of the water are limited to just a few rooms of the 57 rooms).  Parking is limited and not for the faint hearted - the entranceway is very very narrow and the corner posts bear the paint scars of ill-judged entry or exit!  However, there is free parking on the road outside and when we were there plenty of space available (though I am not sure if parking would be more difficult in the summer).  The surrounding roads are very narrow, and the town of Seaview itself is like a rabbit warren, with many one-way streets, but it's only a short walk to the beach and local restaurants.  We stayed in the new block of just three bedrooms across the small carpark,  which were the only rooms serviced by a lift. Our room was large, very well appointed, and with amazing ensuite facilities where you could view a separate television set into the wall beneath the shower from the comfort of the double bath!  Because of COVID-19 restrictions you could choose whether or not to have the room serviced - we decided against but extra towels and tea/coffee and so forth were supplied readily.  The hotel bar was well patronised by locals with a good bar menu and that menu was also available in the bistro or dining room in addition to their own menus; there was a good choice of food, and breakfast options in particular were excellent. One curiosity was that the downstairs toilet facilities are available to passers-by - apparently a quid pro quo of the planning process because the new bedroom block had been built on the site of public toilets.  Altogether a very pleasant stay with helpful and friendly staff - though negotiating the narrow labyrinth to access other places could get tiresome if one stayed for any length of time.

Breaking news… The Isle Of Wight has suddenly become a most heavily Covid affected area which has been explained plaintively in https://www.theguardian.com/commentisfree/2021/jan/16/isle-of-wight....

As of mid January, the Isle Of Wight has experienced an increase in Covid cases, as has the rest of England,  and visits are not encouraged. Stay tuned.

England has gone into its third wave lockdown since writing the above; however, Brexit  has finally resulted in a deal so everything is better on Christmas Day,