I’m what you might call a pretty casual Harry Potter fan. I read the first book and saw most (not sure if all) of the seven movies with varying degrees of pleasure. But visiting “The Wizarding World of Harry Potter,” the long-awaited theme-park-within-a-theme-park at Universal’s Islands of Adventure after its official opening this past Friday in Orlando, Florida, I found myself awash in a sweaty sea of Potterphiles — many presumably so devoted to J.K. Rowling’s creation that they’ve made a point of rushing to Orlando in 90-plus-degree weather for Wizarding World’s very first week.

And I’ll say it right now: In the making since May 2007, WW is pretty much a masterpiece, faithfully bringing to life the key settings and characters of the books and movies — thanks especially to the close involvement in the development process of Rowling and others such as art director Alan Gilmore, who had the same gig in several of the flicks. Strolling through the front gate, the evocative crooked roofs and chimneys of Hogsmeade village, with the imposing, vaguely sinister silhouette of Hogwarts castle looming in the background, may just make your jaw drop — it’s picture perfect, with an attention to detail that I’ve seen certainly in no other theme park. For instance, the local eatery, the Three Broomsticks, along with the adjoining Hogs Head pub, strike me as a pretty damn good reproduction of a medieval public house interior, complete with weathered beams (I might add, by the way, that the grub’s quite good, too, with the Englishy-type likes of fish and chips, shepherds pie, and so forth). Most of the key members of the gang are here, of course — not just the dude with the lightning bolt on the forehead but Hermione Granger, Ron Weasly, Draco Malfoy, Hagrid, Dumbledore, and more (though oddly, I didn’t spot he-who-must-not-be-named — oh, OK, Voldemort). But here’s the thing: The whole spread is pretty small — just 20 acres wedged between Jurassic Park and the Lost Continent. Vice President of Universal Creative Thierry Coup told me it was purely to keep as much as possible the intimate feel of Hogsmeade, but a park PR rep admitted, “we wanted it to be larger, but J.K. Rowling insisted” otherwise. Somehow I suspect the collaborative process may not have always been, how shall we say, smooth as the head on a butterbeer.

Hagrid's Cottage at the Wizarding World of Harry PotterAlso, there are only three rides. “Flight of the Hippogriff” is the smaller, briefer, and tamer of the two rollercoasters, and includes a replica of Hagrid’s cottage and the eponymous animatronic Hippogriff (supposedly a cross between an eagle and a horse). Nearby, the hanging, interlocked double “Dragons Challenge” coaster is even more of an adrenaline rush — and also, by the way, quite similar to its pre-Potter incarnation, “Dueling Dragons” (except of course for that Triwizards Tournament paraphernalia you pass while waiting in line). The third, however, is WW’s true signature. Housed within the Hogwarts replica, “Harry Potter and the Forbidden Journey” deploys an entertaining mix of animatronics, the kind of “talking paintings” we see in each Potter movie, and vertiginous filmed sequences that make visitors feel like they’re swooping through the air at breakneck speed in and around Hogwarts and its Quidditch stadium. But more than rides, here it’s really about the village and the vibe, and also tremendously popular are shops such as Honeydukes, Zonko’s Joke Shop and Ollivanders Wands, in which candy, beverages, and apparel, plus wands and magical gizmos, are recreated and put on sale.

All pretty impressive, indeed. But there are two key caveats worth making. The small size of Wizarding World means that the folks who rushed to opening weekend and week had to be prepared to brave huge crowds and lengthy lines in 90-plus-degree weather; this past Monday, the first weekday after opening weekend, by mid-morning the line just to get through the front gate was 3½ hours long. That was followed by another two hours for the Forbidden Journey; an hour for the restaurant; and even an hour and a half to get into the bloody wand shop! One way around this is to stay at one of the three on-property resorts; this entitles you to get into Islands of Adventure an hour before the general public — meaning first dibs and way shorter wait times (of course, this’ll cost you; typical standard room rates this summer can easily run $250 a night and up). 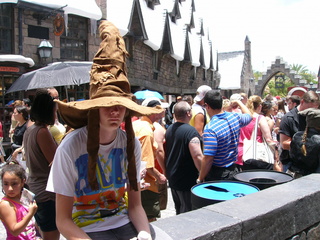 The crowds and lines will eventually get less crazy, naturally, but what I wonder is when. Given the pent-up demand among the world’s Pottermaniacs, I wouldn’t be surprised to see a few more months of the same — and certainly no letup before school goes back into session this September.

Also keep in mind that besides the regular Islands of Adventure daily admission of US$109 per adult and $99 per child (multiday tickets up to $170/$150 for seven days), you’ll likely still want deep pockets in order to navigate all the merchandising on display here, beginning with the ubiquitous butterbeer (which to me comes across like a hypersweet cream soda), $9 in its plastic souvenir mug, and pumpkin juice at $6 per eight-ounce bottle. Then of course there are the various sorting hats ($30), plastic wands ($29), and polyester scarves and robes of Griffenclaw, Slytherin, and the like ($35 and $100, respectively). At least the food’s reasonably priced, with platters starting at $10. But just be forewarned: to keep up, your wallet may need a little magic of its own. Engorgio!

Besides the video below, check out more pics of the Wizarding World of Harry Potter here.