The “C” in the ABC islands of the Dutch West Indies does have dandy diving, dining, nightlife, and a few sweet strands. But for me, Curaçao's single strongest suit is its fascinating culture, especially from its colonial days, including fairytale architecture, landhuizen (country estates) where you can dine or even overnight, and the distinctive cuisine of the Papiamento people. I also wouldn't miss an acre-size trove of local botanical lore and traditional medicine called Den Paradera. 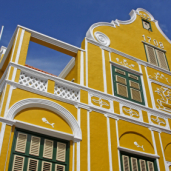 Cultural exhibit A, however, has to be the museum and seasonal show offered by one of the Caribbean’s most special resorts, the 80-room Kurá Hulanda. The main complex, a quick stroll across the pontoon bridge from capital Willemstad, is a self-contained, cobblestone-paved “village” made up of gorgeously restored 18th- and 19th-century buildings (if you absolutely must stay on a beach, go for the newer, 74-room Lodge/Beach Club up on the north coast, and make use of the shuttle between the two). Despite the deluxe nature of both, good deals are available, with autumn rates starting at US$130 per night. But for us the centerpiece is the Museum Kurá Hulanda (above right), also open to non-guests (15 ANG/US$9 per person; 9 ANG/US$6 for seniors and kids under 13; 13 ANG/US$7 for students). The collection is owner Jacob Gelt Dekker’s expertly curated homage to Curaçao’s Papiamento culture, focusing especially on its African roots and the slave trade; from October through April, an evening show is added to the mix. It was a moving and powerful experience for me, and I’ll bet it will also give a profound extra dimension to your own turn-n-burn vaycay.