I’d been on assignment at the Four Seasons Costa Rica when I headed south to take advantage of the prize I’d won at an Allianz-sponsored Tripatini event in NYC: a week of intensive Spanish classes at the Samara Language School (Instituto de Idiomas Intercultural) on the beach in Playa Samara. I’d forgotten much of the semester’s Spanish I’d taken in college, and I was looking forward to a quick refresher course. Unfortunately, I couldn’t get there in time for the first class, and I was anxious about starting behind, even in a class for complete beginners, given that they employ the immersion method: each day’s 4-hour class was conducted completely in Spanish. 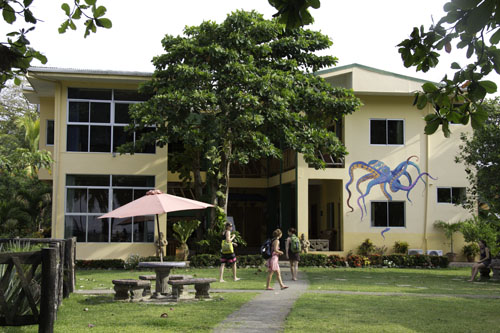 On the day I missed, the class had begun with such basics as conversations to introduce themselves—and not merely their name but where they were from, their ages, their professions--and had been given an assignment to write about their friends and family describing their appearance (eyes, hair, height), ages, professions, and more. And not long into my first session, they proceeded to read aloud the mini-essays they’d been assigned as homework overnight.

I could pick out a phrase here and there but let’s be honest, beginning students—particularly if their native language was German, as was the case of the other five students in class--struggle to pronounce an unfamiliar language and that made it even harder to understand what they were saying. As each finished, we were asked what we could recall or understand, and in my case at least I didn’t even have the benefit of the vocabulary they’d been introduced to on day one. I gleaned little other than their ages—the oldest was 20—and countries of origin, Germany and in one case Switzerland.

And yet, thanks to Ruth Mora Carrillo, our teacher, I never felt overwhelmed. Granted, I was a French major in college and thus have been through the tribulations of learning a second language, but it was really her patience and good nature that made sessions I expected to be taxing instead challenging and rewarding. Very animated, she had a gift for making sure you got the gist of what she was saying, despite the fact that it was entirely in Spanish. From time to time, she’d post vocabulary on the white board behind her, drawing little pictures to illustrate the names of the four seasons, for example.

Midway through my first session, we broke into pairs were handed a magazine, and told to cut out an image of a man and one of a woman, paste them on some craft paper, and then write descriptions, not just physical but anything else we wanted to make up about their background. We did this work on tables outside, providing a relief from the intensity of the classroom work.

But this wasn’t merely about conversation—though that was necessarily a huge part of it: the sessions also began early to dwell on important aspects of grammar and spelling, using a workbook all of us received. The focus began with the verb “to be” (which actually exists in two forms in Spanish, each with its own proper usage) and “to have” and their conjugations, and a whole list of expressions of place (“here,” “there”, “beside”, “far”, “to the right or left of”, “to the north or south of”). To practice them, we were shown a picture of a house or a town (with appropriate vocabulary) and asked to describe where various things were in relation to one another. And by my second day we were compiling (and expected to study) long lists of verbs, their meanings, and their conjugations. There were flash cards with pictures or words and we had to describe, use, and in the case of verbs conjugate. We were handed a paragraph to translate overnight. Yes, there was homework.

Many of the students opted to stay with a host family, thus getting a chance to use their language skills away from the school. I opted for a B&B for the few days I was there thinking that the proprietor, though American, would speak Spanish (she didn’t) and hoping to meet other vacationers (I was the only guest). I also wanted to check out different restaurants in town and I needed WiFi (which the school has though it wasn’t always working when I was there), which the B&B offered.

There were a few after-school activities: a dance class, a yoga class, a student-vs.-teacher soccer game. Midway through each class there’s a break and a woman arrives selling cheese or meat empanadas, muffins, and fresh fruit. The yard between the school and beach has a mini-refrigerator when students can keep things during the day, dishes and a sink for cleaning up, coffee, filtered water, and table, chairs, rocking chairs, and hammocks in the shade of the coconut palms and a wooden structure with a tarp roof. It was a place to congregate, study, or just hang out and read. For those staying for weeks—and most do—there were organized weekend excursions.

The beach is extraordinary, a very long crescent more than 100 yards deep and low tide and renowned for its beginner surf as the tide comes in. The town behind it is pretty much what you’d expect of a beach destination: a collection of bars, restaurants and hotels, a few shops, hawkers’ stands, real estate offices, arrayed on a grid of roughly paved streets extended three blocks inland from the sea. By the time I arrived, high season had ended and it was much quieter than it evidently is in high season (think difficulty getting into restaurants, disco on the beach).

Having arrived a day late during a week when there was a religious holiday, I ended up with only three days of sessions. In my case, three days went a long way toward extracting forgotten language from whatever dim recesses of the brain it resides in. Fragments of vocabulary came back to me. Knowing French made a huge difference: the sentence structure and word roots are similar and having learned one language I knew full well that only by trying to speak, however much you blunder through, do you eventually develop conversational skills.

I had empathy for my German-speaking classmates, most of whom struggled mightily. Theirs is such a different language, highly inflected, but having few if any cognates with romance languages. Several of them suffered, especially when it came to conversation, and I’m sure I would have felt much as they did if I’d been learning Chinese or Arabic instead of Spanish. But immersion is the way to go: it teaches you to listen and forces you to speak, without the option to fall back on your own language. I’d love to do it again, next time in Barcelona.

Samara’s Advice For Learning a Language

Roger, even with just three days of immersion language classes, you've portrayed exactly what it's like. The only real differences between what you did in Samara and what I did in Seville were (1) you got the beach, (2) I got an instructor who forbade us to speak in any language other than Spanish after each day's classes were done. Just imagine having dinner with other students, no teacher around, and trying to discuss American politics en espanol. Hard enough in English.