In case you’re wondering where is Montenegro, for starters it’s one of the world’s newest countries – a Slavic land once part of Yugoslavia, then Serbia, and now independent for just five years.  And though small (smaller than the U.S. state of Connecticut, in fact) it’s an up-and-comer indeed on the travel scene, with great history, nature, and above all a Dalmatian coast generally less well know than Croatia’s further north, but just as spectacular. And on said coast, you’ll find one of Europe’s oldest towns (2,500 years), been transformed into the red-hot center of tourism.

Budva boasts a mix of gorgeous beaches, limpid waters, soft adventure, historic sights, and tourism amenities has been pulling in Europeans (especially Russians and eastern Europeans), but is increasingly attracting attention from those of us across the pond, as well. International stars such as Madonna, Lenny Kravitz, and the Rolling Stones come ‘round to do their thing, and especially in summer, when the population of just over 16,000 rockets to more than 300,000, Budva’s been dubbed “the Kuwait of Montenegro,” with Europe’s single biggest concentration of millionaires per capita (though don’t worry, Budva hotels and restaurants do run the budget gamut). 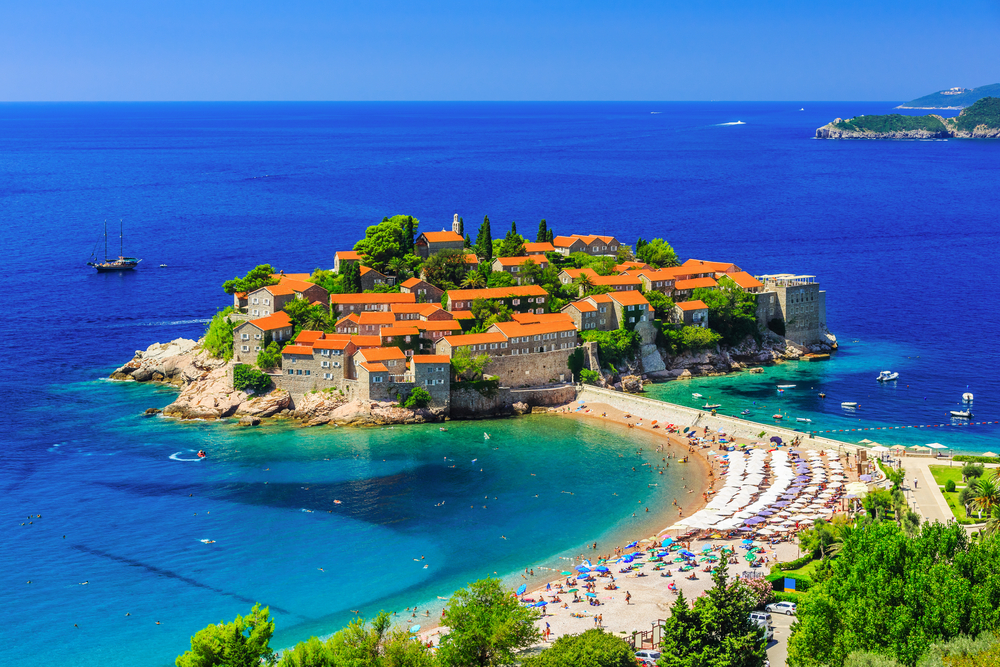 Along this stretch of coast, called the Budvanska Rivijera, the 35 fetching beaches are the main draw, of course, and one of the fetchingest is the 6,600-foot strand in Bečići, a village just a several-minute stroll south of Budva. But living as I do in Miami, Florida, I can go to great beaches in my own backyard, and so what particularly attracts me to many of these Dalmatian coastal towns is their medieval flavor, mixed with a sometimes Italianate feel.  On that front, Budva’s a keeper, especially thanks to the fact that it’s got one of Montenegro’s only walled old towns (the other is Kotor; more about that in another post). The sense of history here is amazing – it was mentioned by the ancient Greek playwright Sophocles, and ruled by ancient Greeks and Romans, then Serbs, Venetians, Austrians, French, and Russians, before becoming part of Serbia, then Yugoslavia, then independent Montenegro.

Take some time to wander around Stari Grad (Old Town), right on the old peninsula (pictured above), with its medieval ramparts, narrow streets, and charming little plazas. Highlights include churches like St. John’s Holy Trinity, and St. Sava, along with the citadel and its city museum. Along the way, there’s no shortage of cafés and shops to keep you fed, watered, and amused.  In my mind, a pretty darn good example of what makes summering on the Med so awesome; check out the vid below and you’ll see what I mean.