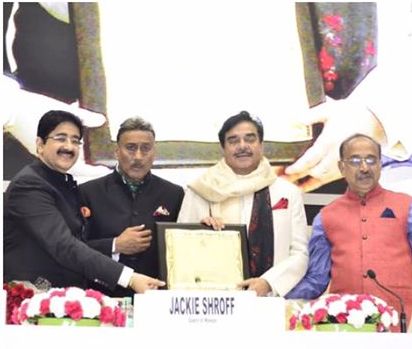 New Delhi: ICMEI- International Chamber of Media And Entertainment Industry constituted a National Award-Hindi Cinema Samman under the leadership of renowned International media personality and six times World Record Holder Sandeep Marwah to be presented to all those who have contributed to Hindi Cinema in all these years informed Ashok Tyagi Secretary General of ICMEI.
In a super grand function Vijay Goel Minister of State for Parliamentary Affairs, and statistic and implementation Government of India, in the presence of thousands of people, handed over the powerful award to Shartughan Sinha in the most prestigious auditorium of Government of India at Vigyan Bhawan.
Renowned cine star Jackie Shroff, ICMEI President Sandeep Marwah CINTAA General Secretary Sushant Singh, FWICE President B.N. Tewari and IMPTPA President T.P.Agarwal were also present there.
“Hindi Cinema is my bread and butter. What ever I am the credit goes to Hindi Cinema, which has brought millions of people close to me. The cinema has brought the whole country and Indian settled abroad close to each other. Hindi Cinema is the brand ambassador of our culture,” said Shatrughan Sinha on receiving the Hindi Cinema Sangrakshak Award.
Shatrughan Sinha is the only film star who has been Union Minister in Government of India for two times. He has been in films since 1969.