Impatiently, I looked at my watch. Only a quarter to six. And, for the first time, I realised the significance of the date. 6th May 2005 … and a year to the day since I got carted off to hospital.

My doctor said to call it a "cerebro-vascular accident". ‘Tell people you had a stroke," she said, "and they treat you like an invalid or an imbecile".  Mind you, it wasn’t a bad one; probably just a warning to straighten up and fly right. I was driving again after only a couple of months, and soon could do most of the things I used to. The first anniversary really wasn’t a cause for celebration, but today it seems I was going to mark it in a special way, with a walk down Crete’s famous Samaria Gorge.

There’s an advantage that gorge walking has over mountaineering. You can select a route that’s all downhill! That’s the way most people choose to walk the Samaria Gorge. You can start at the bottom and climb up, if you like, but not many people go that way.

The first two kilometres of the descent from the village of Omalos, at 1,250 metres, are along the ksiloscala (wooden staircase). This is a winding, stony path down the side of the gorge, the stones held in place by the logs which give it its name. And being confronted by that climb at the end of a fairly strenuous 16 kilometres would sap the resolve of the strongest. 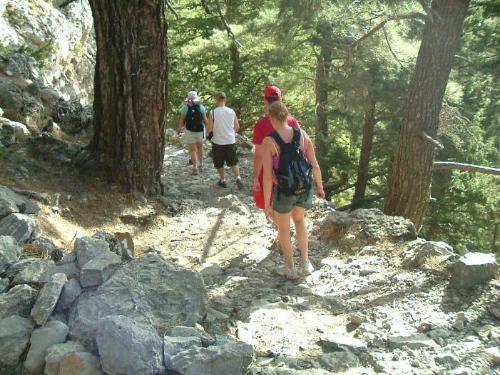 But before descending the ksiloscala, you must first spend 5 euros on an entrance ticket to the gorge. Carl went on ahead, and I pressed on slowly, and did some people-watching on the way. There were lightly-dressed teenagers, and a grim-faced couple equipped for serious hills, each carrying a pack that would have made a Marine’s knees buckle!

I had wondered which of these extremes I should go to. Should I wear boots, or would trainers do? In the end, I compromised, and wore my leather Timberland walking shoes.

The way down the side of the gorge led through a substantial forest of pine and cedar. My book said that the forefathers of these trees had been used for shipbuilding when the Venetians occupied the island. I wondered how they got the logs out of the gorge - then realised all they had to do was get them down to the river, and wait for winter.

The water-worn, bone-white boulders of the river bed told their story of the flash floods of the winter. For this reason, the gorge is only open between May and October, and will be closed during the ‘season’ if the rangers consider that any risk at all exists. The boulders also make for difficult walking, but we don’t want it too easy, do we? One thing you don’t have to take is water. There are seven springs along the route, each decanting drinkable water into a stone trough. I had my water bottle to hold anything I might require in between springs, but, even this isn’t really necessary. The water in the river is potable … in fact, we were told at the start not to cool our feet off in it, in order to keep it so! And, where there’s a spring, there’s a chemical toilet not far away.

All this talk of drinkable springs and WCs makes the transit of the gorge seem rather a slight thing, but it’s not. It’s 18 kilometres of pretty hard going. The rangers, stationed at the abandoned village of Samaria, at about the halfway point, ride in on donkeys, because that’s the only form of transport possible. And, those donkeys also double as "mountain rescue ambulances"!

By the trail, I saw something familiar yet alien. The "Dragon’s Tongue"flower is so obviously a relative of the cuckoo pint (or "Red Hot Poker", "Lords and Ladies", Wild Arum, ‘Jack in the Pulpit" or whatever it’s called in your area). But, this one has a striking, deep purple leaf. Another familiar shape was close to hand; the wild cyclamen … an easily recognisable shape, but much smaller than the variety you buy at the garden centre.

And, on every side, the peaks of the Lefka Ori (White Mountains) hemming us in. The only way out was the path down the gorge … or back the way we came.

By the side of the river, about halfway along the route, lies the abandoned village of Samaria. The villagers were moved out in 1962, when the Lefka Ori area was declared a National Park, and rehoused at Ayia Roumeli, at the mouth of the gorge.  Some of the houses remain, although in a ruinous state; here there’s a spring and toilets. And here, many people like to eat their sandwiches in the tree-shaded plateia, or village square.

At Samaria, I met Carl again. Had I seen the ankle-socks and carrier bags, he wanted to know. I said they had got back on the bus, to travel to the end of the gorge and walk the ‘easy route’. That was an option I’d briefly considered, but, no matter how good a driver the excellent Manoli was, an 18 km. walk over some pretty serious ground seemed preferable to a bus-ride back down those hills. All the way down, we saw numerous small cairns. Surely they weren’t necessary, I thought. The worst navigator in the world couldn’t get lost in a ravine. But, a ranger later explained they were necessary. The path often got washed out by the winter floods, he said, and they needed to show the volunteers who rebuilt it in the spring where it went.

The Iron Gates are the narrowest part of the gorge, and as we approached them, we began to meet people who had taken the easy option of a short out-and-return walk from Ayia Roumeli. They’re so called because of the iron in the rocks, which turns them a distinctive red colour.

Soon, we came upon a hut, manned by a ranger, who requested our entrance tickets. "If you’ve lost it, you’ll have to go back and get another!" he grinned. But the purpose of his request was deadly serious. It’s the authorities’ way of counting them out, and counting them all back.

We still had a short way to go to the village of Ayia Roumeli, at the entrance to the gorge, which is only accessible on foot or by boat. We were to meet the guide, who had left Omalos an hour after we did, to ‘whip in’, at half past four, so that she could issue our boat tickets. That left us two and a half hours to kill. And, there’s not much in Ayia Roumeli; we had the options of eating, drinking or checking out the beach, and that was it.

The decision was made by Carl. 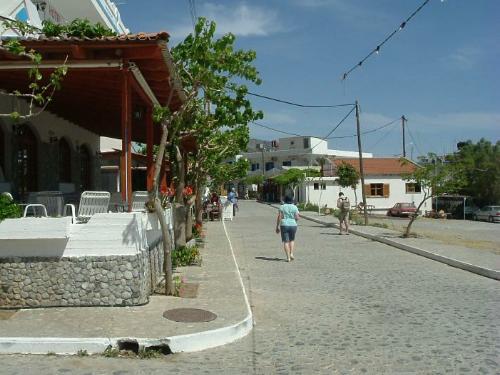