If you're visiting Vietnam's capital, be sure to set aside time for a couple of day trips out of the city. And one you shouldn't miss is one to Ninh Binh province, about an hour by train, bus, or car (if you don't want to travel independently, tour operators run packaged day trips). In contrast with bustling Hanoi, Ninh Binh in the Red River Delta is famous for its peaceful tranquility and scenery, especially the sheer limestone karst hills rising around the river - a UNESCO World Heritage Site dubbed "Halong Bay on land.". The central attraction, of course, is taking a sampan cruise through this magical land- and riverscape at Tam Coc (more nature focused, including Huang Mua, a cave atop one of the hills reached by steep stairs, and its spectacular 360-degree views) and Trang An (with an additional highlight being the Bai Dinh Buddhist temple complex, above, including ancient cave temples).

Another nearby attraction, surrounded by karst hills, is the small city of Hua Lu or Hoa Lu (above), capital of a 10th- and 11-century kingdom  where among other things to take in several temples, tombs, caves, and a pair of impressive restored pagoda.

(For a package leaving from Hanoi including combinations of the above, I recommend Hua Lu Tam Coc Day Tour. Full disclosure: I am affiliated with it.) 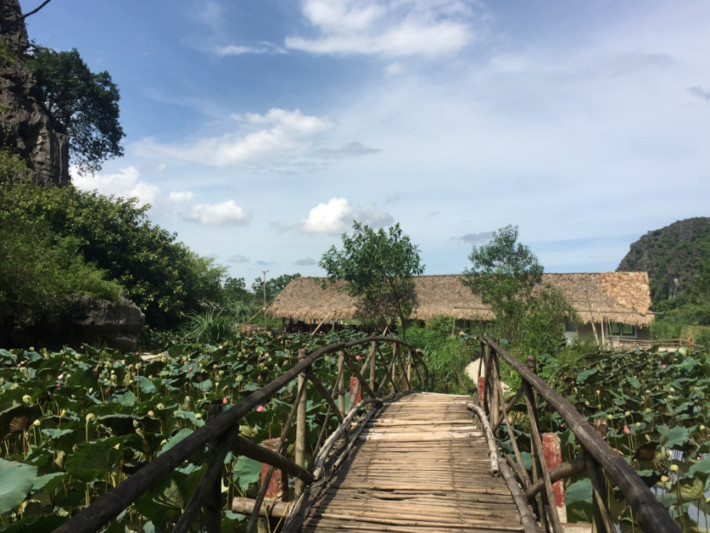 There are nearly 200 lodgings of various types in Ninh Binh, ranging from luxury hotels down to simple guesthouses and homestays such as Chez Beo (above), where I stayed last. Despite being called a "homestay," in fact it's a compound in a nature setting with a nine-unit mix of (fairly basic)  rooms and bungalows, a restaurant, a children's playground, and a 24-hour front desk.

And of course there are ample opportunities to sample the cuisine in Ninh Binh, with nearly 200 restaurants, including international as well as Vietnamese fare; three of the top choices for the latter are Duc Nhat, Thao Beo, and Trung Tuyet. Local specialities include shrimp paste; glutinous rice with ant eggs; com chay (burnt rice crust, above); and mountain goat (the last of which I especially recommend). 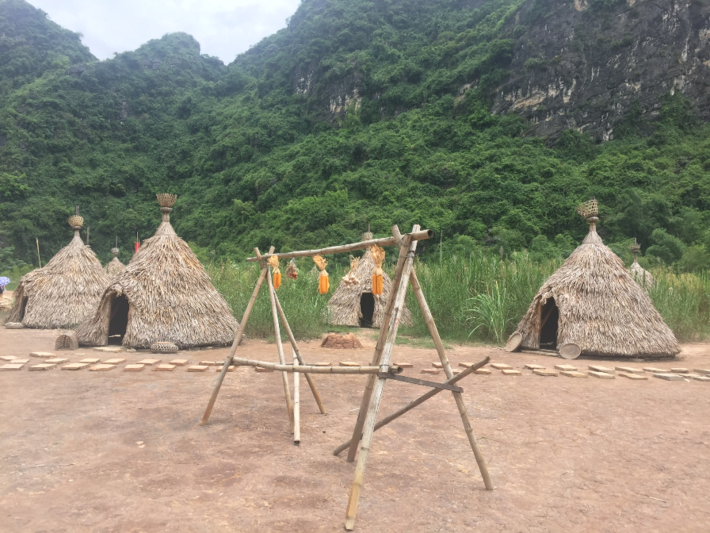 Finally, above is a bonus on my visit to Trang An: the film set of the 2017 movie Kong; Skull Island, with a specially constructed "aboriginal village." Fun for film buffs!