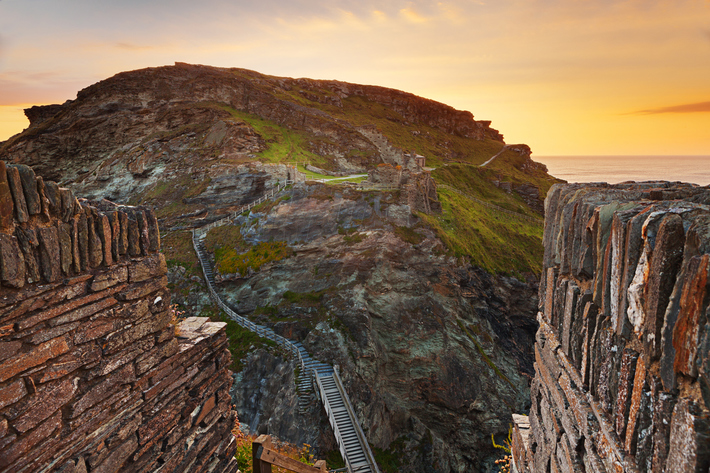 With lovely countryside, coasts, hills, vales, forests, and towns, much of Britain has much to offer families - or anyone, really - interested in a rewarding road trip. Here are three particularly excellent routes - two in England and one in Wales - that will delight everyone, young and old. (And by the way, remember that especially in the case of families of four or more, it's usually better to rent a van so that everyone can have ample space, as well as room for any luggage you might need.)

Because it follows the line of the Atlantic coast, that's what the Cornwall and Devon stretch of the A39, which runs from Bath down to the coast, is called. And some of Britain's most breathtaking coastal areas can be seen along these 76 miles, including Constantine Bay, Bedruthan Steps, and the towns of Newquay (Britain's surfing capital), Barnstaple, Wadebridge, Camelford, Bude, and Tintagel (including the ruins of Tintagel Castle, above, associated by many with the legendary King Arthur and Merlin the wizard).

On the opposite, North-Sea coast of England, in the largely rural East Anglia county of Norfolk, start driving from its capital Norwich, founded by the Iron-Age Iceni tribe and home to a number of impressive medieval monuments.  From there, head east to the Broads, a region of seven rivers and 63 broads (lakes) treasured for its ecotourism (especially birdwatching) and boating. Then drive north to Cromer, which has been a charming seaside resort since the early 19th century, and also has landmarks dating back to the Middle Ages. And about an hour's drive farther along the coast, Brancaster Beach near the town of Hunstanton offers miles of sand - family friendly as well as a haven for windsurfing and kitesurfing.

The A4086 Through Wild Wales

Experience the mountainous beauty of north Wales starting from the town of Betws-y-Coed, a resort town with lots of charming Victorian architecture. Head west past the town' s lovely Swallow Falls and into magnificent Snowdonia National Park along a scenic route through Caernarton (with its atmospheric medieval old quarter) across the Menai Strait bridge to the pastoral, heavily Welsh-speaking Isle of Anglesey. with its charming towns, castles, and Neolithic remains. This can be driven in one day, but is best appreciated taking your time, with one or two overnights.