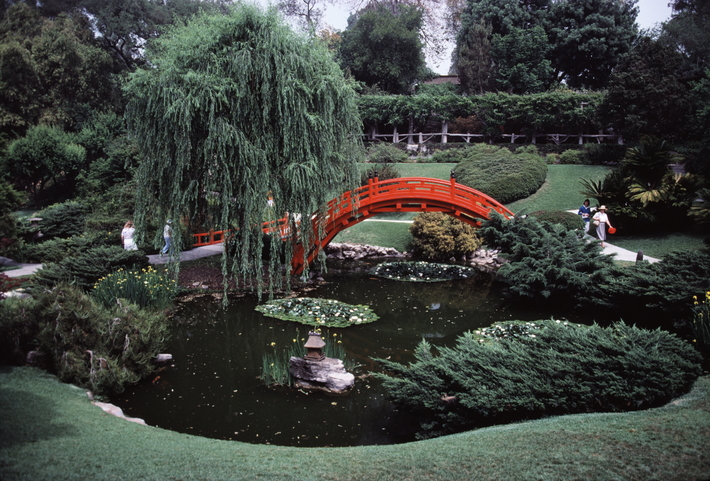 Spring is here, and summer's already around the corner!  If you’re a flower gardener - and the National Gardening Association estimates that members of over a third of U.S. households are - you already may have begun to till soil and plant seeds. And those who like to travel as well as garden (as well as those who enjoy gardens more by watching than working), now is time to plan a trip to take in some of Mother Nature’s bountiful beauty.

Gardens come in a variety of types, sizes and offerings. Some are urban pockets of color and scent, others world-famous destinations that people travel far to see. They also can turn pages of history, amaze with their beauty, and at times also amuse.

Wherever you live, or go, there no doubt are parks and plots that can satisfy a longing for the splendor that flowers, shrubs and trees provide. Many city dwellers live close to outstanding public gardens.

For example, residents of Los Angeles have easy access to one that’s said to offer more types of plants than any other botanical garden in the world. The 16 themed areas at the Huntington Botanical Gardens include sections devoted to natives of California, Australia, and Japan (top); the deserts, jungles, and the subtropics; and specialty flora including herbs and roses.

Vibrant colors team with chapters from the past at what’s billed as Charleston’s "famous gardens." This historic South Carolina city is home to three spectacular settings that were born in pre-Revolutionary times. Magnolia Gardens was established in 1671 and once was listed as among the three most outstanding attractions in the United States, along with Niagara Falls and the Grand Canyon. It's still quite an experience, including moss-draped live oaks spreading their branches over masses of color that line inky black lakes. Water also is a key feature of Cypress Gardens, where island-studded lagoons reflect a blaze of color, and what today is a swamp garden in the mid-18th century served as a freshwater reservoir for a nearby rice plantation. Middleton Place also was an important plantation when creation of its gardens got underway in 1741, laid out in the classic style then in vogue in Europe, which accounts for the descending terraced lawns that lead to the oldest camellia plants in the Western world and more than 100,000 azaleas.

Clear across the country, Portland, Oregon touts itself as the "City of Roses," and the International Rose Test Garden alone could be reason enough for that moniker. It was founded as a safe haven for hybrid flowers grown in Europe during World War I, and the grounds are divided into several areas where more than 10,000 of these blooms thrive. Very different atmospheres greet visitors to two Asian-inspired settings in Portland. The Japanese Garden is considered to be the most authentic of its kind outside of Japan; among its five distinct areas are a Strolling Pond Garden, Sand and Stone Garden,  and Bonsai Terrace. Portland's other Asian horticulture hub is the Lan Su Chinese Garden, which offers an immersion in an authentically designed Ming Dynasty-style atmosphere. Itw richly planted landscape encompasses open colonnades, graceful bridges, and covered walkways. Then there are topiary gardens, where shrubs and trees are trained and trimmed into ornamental shapes, and include touches of humor.  At Ladew Topiary Gardens in Monkton, Maryland (a half hour north of Baltimore, an hour and a half from Washington DC), they echo the love of hunting by the property’s original owner, with flora-sculpted scenes including horses, riders, and hounds pursuing an unfortunate fox.

More whimsical wildlife inhabits Green Animals Topiary Garden in Portsmouth, Rhode Island -  in addition to an elephant, ostrich and unicorn, there’s a menagerie of teddy bears and more than 75 other critters.

Animals, along with a table, chair, and geometric forms are features at Longwood Gardens near Philadelphia, but they’re just for starters. Sharing Its 1,100 acres are woodland, hillside and meadow gardens, and indoor environments that mimic desert regions and South America, along with places where orchids thrive. There also are welcome surprises that extend beyond what you might expect.  People strolling through the Desert Botanical Garden in Phoenix follow trails that lead to plants which thrive in some of the hottest and driest parts of the world, including desert wildflowers and vegetation that has been traditionally used by native people for food and medicine for centuries.

Therapeutic horticulture benefits also are a focus at the Coastal Maine Botanical Gardens, which sprawls across a forest that includes nearly a mile of tidal saltwater frontage.  It offers a "Nurturing Connections" program for people facing physical, social or emotional challenges which is intended to evoke the benefits of close encounters with nature. 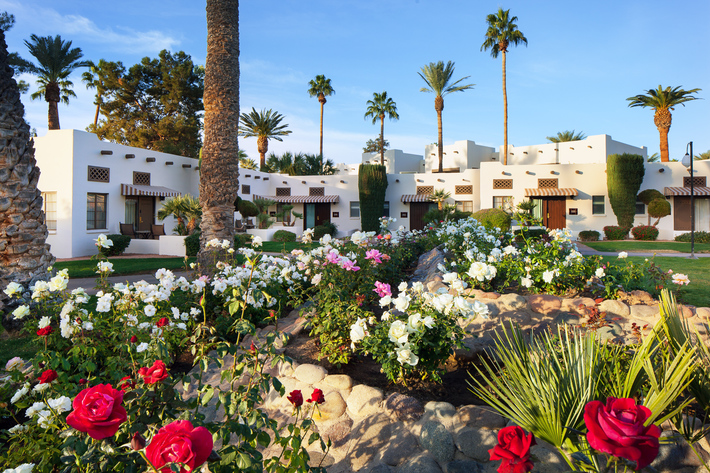 Furthermore, beyond gardens per se some resorts and hotels around the country add magnificent floral attractions to their other amenities. The gardens at Antrim 1844 in Taneytown, Maryland, whose name indicates its founding date, are bedecked by more than 80 varieties of English Tea Roses, which make it a popular venue for weddings, while a secluded Secret Garden features a changing display of annuals.

More than 8,000 rose bushes, citrus trees, and towering palms are among plantings at The Wigwam  (above), a half hour west of Phoenix, which has been a world-class resort since 1929. Its 440-plus acres of lush landscapes also include colorful spreads of seasonal flowers and native cactus. and the spa here uses rose petals from its garden in some treatments.

And finally, zoos can also serve double duty as places of floral beauty. In addition to its resident animals, the Cincinnati Zoo offers green, conifer and pollinator species gardens.  There also is an area which demonstrates the environmental advantages of having rooftops do double duty as growing mediums.