Movies/TV tourism is of course a popular and growing subsector of travel, as New Zealand joyously discovered with Peter Jackson’s Lord of the Rings/The Hobbit franchises and areas of the United Kingdom found in the wake of the Harry Potter films. More recently it’s been the turn of HBO’s Emmy-winning television blockbuster Game of Thrones, whose just concluded fifth season is currently thrilling record numbers of viewers around the world – and inspiring more than a few of them to make their next trips be to locations where the series has been filmed.  Well, here they all are, and here’s why they’re cool! One of this Balkan country’s most dramatic features is its Adriatic coast, and the GoT producers leveraged its southern stretch and medieval architecture to the max, starting with a pair of famous cities. The walled Dubrovnik has been masquerading as King’s Landing, capital of the series’ mythicall realm of Westeros, since season two, as have parts of Split up the coast – which especially wows visitors because a large chunk of its old quarter is made up of the marble palace of the Roman emperor Diocletian (used for scenes including many involving Daenarys Targayen - dragon training, kill the masters, hanging out on the throne, and so forth).

Dalmatian Coast town which have helped create the illusion of King’s Landing is Ston, whose defensive walls bring to mind a smaller version of the Great Wall of China, and were reknowned in the Middle Ages, and Dubrovnik’s offshore island of Lokrum was also where scenes are set from the great port city of Qarth, where Daenerys and company take refuge in season two. The fortress of the hill town of Klis near Split is also used as a setting for Meereen).

A few miles north of Dubrovnik, the show found its King’s Landing Red Keep palace gardens in the 15th-century arboretum of Trsteno, and you might recognize the waterfalls of Krka National Park as landscapes of the west of Westeros. Like Krka about an hour up the coast from Split, Šibenik (site of the UNESCO World Heritage Site St. James Cathedral) serves as one of the stand-in for canal-crossed Braavos, home of the Iron Bank and season-five playground of Arya Stark. Just across the bay from Split, Kaštel Gomilica is also be appearing as Meereen. Meanwhile, just south of Dubrovnik, head to Cavtat to among other things get a look at sperm-shaped Mrkan Island, used for some season-three backdrop shots and great for kayaking and diving. And this season, they’ll be airing scenes filmed in the Dalmatian inland town of Imotski, known for its nearby pair of dramatic sinkhole lakes, one of which has medieval 10th-century Topana Fortress perched on its edge. 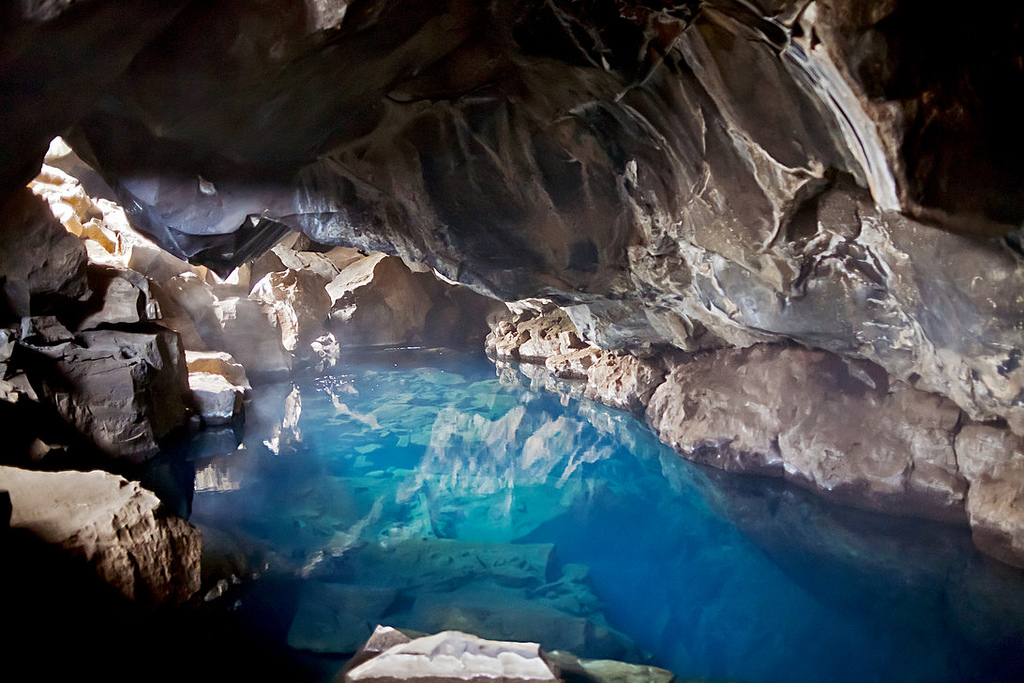 As you might imagine, this chilly, largely barren island in the middle of the Atlantic Ocean is a no-brainer for the frozen northlands of Westeros, including the Frostfang Mountains, the Wall and beyond in seasons two and three, with characters including Jon Snow and his, um, merry men of the Night’s Watch, Arya Stark, the Free Folk (aka Wildings), and the White Walkers. That includes, starting in the central north of Iceland, Lake Mývatn, near a nature reserve called Höfði (ð is pronounced close to “d”) and several volcanoes and craters; Dimmuborgir (“Dark Castles”), dramatic lava fields, pillars, caves and tubes east of the lake (said in local lore to be where Satan landed when cast down from heaven); an estate called Höfðabrekka Heath; and Grjótagjá, a lava cave including a thermal spring which was used for a hideaway for Jon and his Free Folk lover Ygritte.

More season-two scenery from north of the Wall was provided close to the country’s center by Vatnajökull National Park (Europe’s largest, known for one of the world’s largest glaciers) and related Svínafellskjökull glacier. And finally, one place some may even recognize in this year’s (season-four) scenes from the north of Westeros is one of Iceland's most famous sites, Thingvellir National Park (fun fact: actually spelled Þingvellir in Icelandic). These mossy fissure-crossed lowlands in a verdant rift valley is a UNESCO World Heritage Site a place in world history as the site of the Althing, the world’s first parliament, first convened in 930. 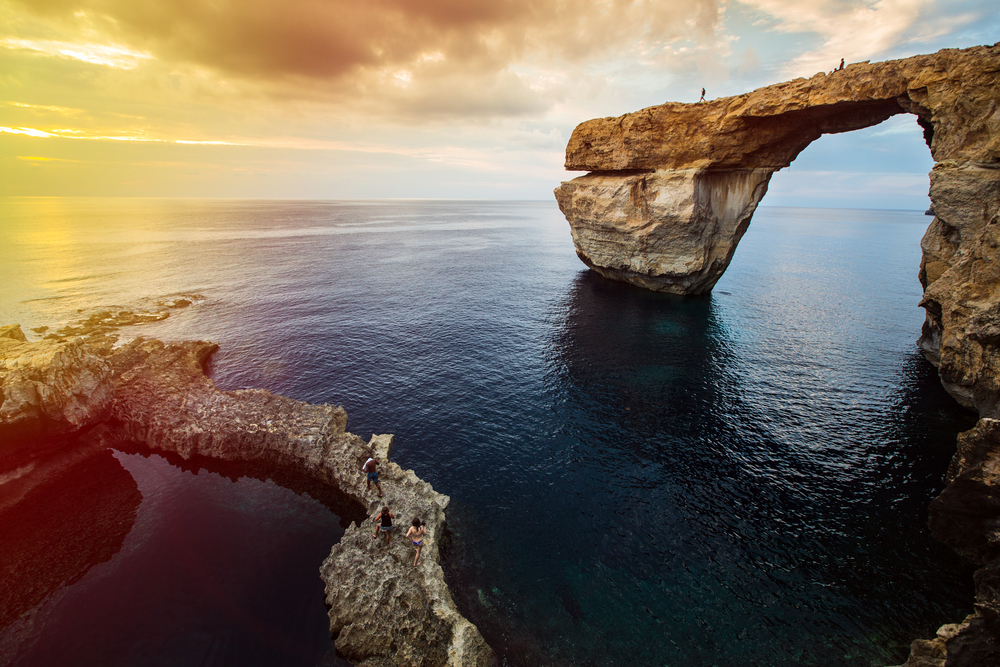 You don’t hear all that much about this Mediterranean archipelago and smallest European Union member these days (fun fact: its language is a blend of Italian and Arabic, with lots of English loan words), but back in the day, the Knights of Malta and the Crusades were a big deal here, and Malta was a hotspot of European history. So a lot of atmospheric medieval and Renaissance architecture as well as a good deal of dramatic scenery scenery perfectly suited to the series abounds, and was made much use of especially in the first season.

GOT locations here (mostly impersonating King’s Landing) are Mdina, Malta’s ancient capital (the gate to its ancient walled town) and three spots used for the Red Keep: Fort Ricasoli in the small town of Kalkara across the Great Harbour from current capital Valletta; and Fort St. Angelo, in Birgu also across the harbor; and the 17th-century San Anton Palace (the president’s residence) in Attard, a 20-minute drive inland from Valletta.

The religious complex in King’s Landing, the Great Sept of Baelor (where Ned Stark was beheaded), was brought to life by 18th-century Fort Manoel, on a bridge-connected island in Valletta’s harbor. Nearly across the island, the presidence’s summer residence, Verdala Palace, near Mdina in Siġġiewi, becomes the mansion of Magister Illyrio Mopatis of Pentos, where Daenerys and her jerky brother meet barbarian warlord Dothraki Khal Drogo out front. Finally, over on Gozo, the archipelago’s second largest island, a limestone arch known as the Azure Window was where Dainerys got hitched to Drogo. 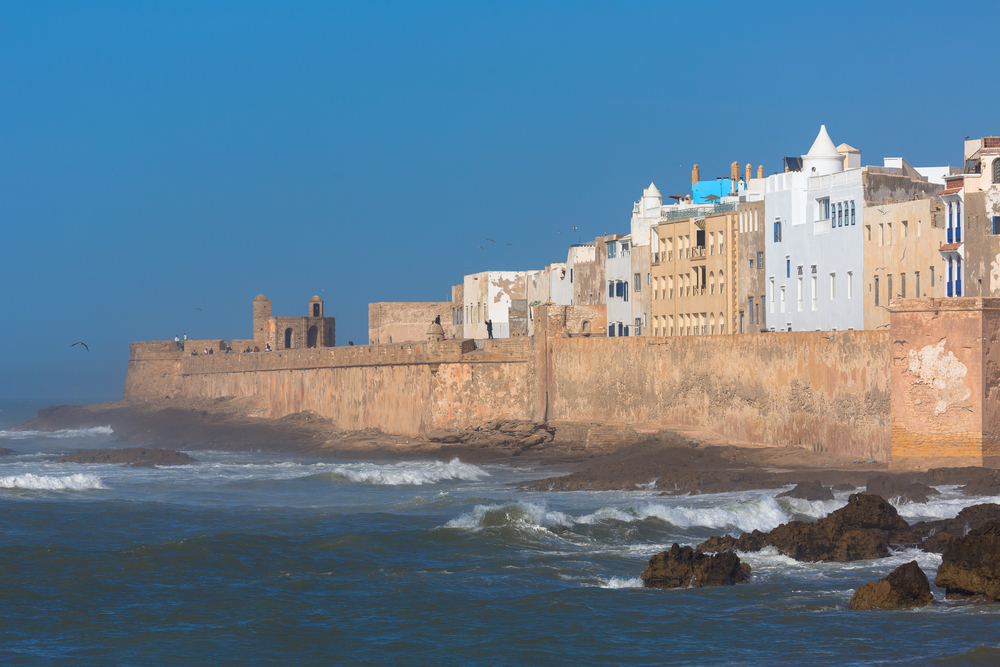 Pentos was also represented by Ourzazate in the series pilot; turns out this “doorway to the Sahara” and surrounding towns in the south-center of the country are a big film-making center, contributing to flicks like Lawrence of Arabia, The Mummy, Gladiator, and Kingdom of Heaven, as location as well as film studio.  GOT returned to Morocco in season three for Astafor scenes filmed in Essaouira (above), the coastal walled city built in the 18th century as Mogador by the Portuguese and to Ourzazate (especially a smaller fortified town and its kasbahs, a half hour’s drive away, Aït Benhaddou, also as Pentos, as well as yellow-brick Yunkai, another slaver city. The Andalusia region of this country’s south joined the roster to lend its exotic beauty to the depiction of Dorne and Meereen in season five. The exotic Moorish architecture here is a perfect fit , and the arched and elaborately tiled patios and courtyards of one of the great palaces of Al-Andalus, Seville’s 10th-century Real Alcázar (still used by Spain’s royal family), have been providing a feast for the eyes as the Royal Palace of Dorne. About an hour east of Seville in the city of Osuna, meanwhile, one of the climactic moments of season five took place as the Sons of the Harpy attacked and Daenerys escaped on the back of one of her dragons during the gladiator games of Meereen’s Danzak’s Pit – actually Osuna’s Plaza de Toros (bullring). West of Seville, the Roman bridge of another atmospheric city, Córdoba (most famous for its enormous mosque, the Gran Mezquita), plays the Long Bridge of the slaver city of Volantis.

In the current season, GoT returns to Spain for King's Landing and Braavos scenes in one of Catalonia’s most evocative cities, Girona, especially in parts of the Call (Jewish quarter) including Plaça dels Jurats square, the Steps of Sant Martí, and streets including Clavería, L’Escola Pia, and Sant Llorenç.

Also in on the act this season is the historic and quaint seaside town of Peñíscola, 3½ hours down the coast from Girona in the province of Castelló, where Meereen scenes were shot in the town's Plaza de Armas and Artillery Park (attached to Peñíscola's iconic fortress), as well as atop the doughty walls of the old quarter. 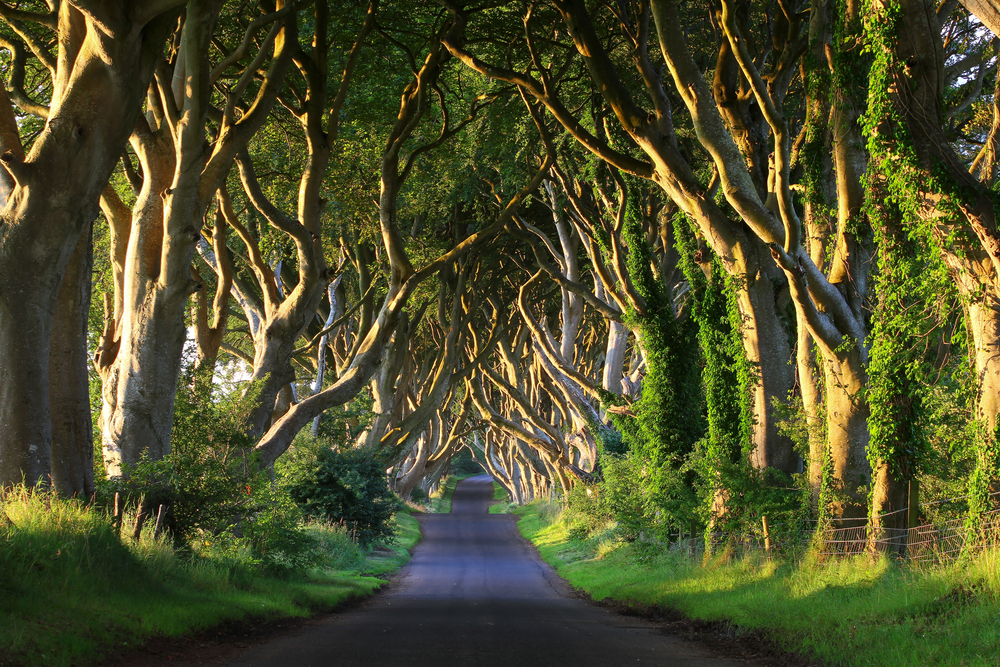 Given the British inspiration and flavor of GoT, it’s no surprise that this sceptered isle looms large in locations.  Northern Ireland has been especially plentiful, mostly along east coast and especially in the first three seasons (in part no doubt because much of the interior filming is done in studios in capital Belfast).

Up on the north coast in County Londonderry, Downhill Beach was where scenes were shot of Dragonstone Island, seat of Stannis Baratheon.  Farther east along the coast, County Antrim was a site of much filming, impersonating the Iron Islands, including Ballintoy Harbour and remote Murlough Bay. The mysterious red priestess Melisandre gives birth to the “shadow baby” in a scene shot at Antrim’s Cushendun Caves, while most of the Dothraki Sea scenes were filmed in the nine lovely, rugged Glens of Antrim.  A bit inland from here is perhaps one of the most visually striking sites in the series: the King’s Road to/from King’s Landing is actually the Dark Hedges (above), a road overshadowed by a canopy of dramatically twisting beech trees planted in the 18th century.

The rest of the locations are in the southern part of Northern Ireland, such as Strangford Lough (or Loch, as the Scots would call it). Overlooking it, the 18th-century Castle Ward estate in County Down is better known to millions as Winterfell, bastion of the House Stark (now House Bolton). Nearby Audley’s Field also figures prominently in the first and second seasons. A bit farther west in County Down, the lovely, multifacted Tollymore Forest Park appeared several times, in scenes involving the Starks and the Night’s Watch. And finally, way out west, near the border with the Republic of Ireland, Belmore Mountain is the site of the Marble Arch Caves – one of which, waterfall-fed Pollnagollum Cave, is shown as the much killed Beric Dondarrion’s hideout in the series.  (For more Northern Ireland GoT details, click here)

Finally, there’s been one foray to Scotland, where Doune Castle portrayed Winterfell in the series pilot. Today this bastion near Stirling, at the edge of the Highlands in the center of the country, built in the 13th century and rebuilt in the 14th, it has also appeared in the Outlander TV series and is open to visitors.