In today’s commercial passenger aviation, understandably it’s the aircraft that get top billing and most of the attention. But the airport systems that make their operation possible include a complex array of equipment, much of which is unglamorous and goes largely unnoticed by the flying public. And one of the key contraptions along these lines is a low-slung vehicle called a pushback tug or tractor.

As the name implies, this doughty workhorse of the tarmac goes into action when it’s time to push an aircraft back from the gate at which it’s parked so that it can taxi out onto the runway. Now, if you known anything about modern aircraft, you’re aware that they can go into reverse on their own quite nicely, thank you very much, with a reverse-thrust mode called powerback. But there’s always the chance that this jet blast or propeller wash could cause damage to airport equipment or structures, so pushback using an external source is generally preferred. 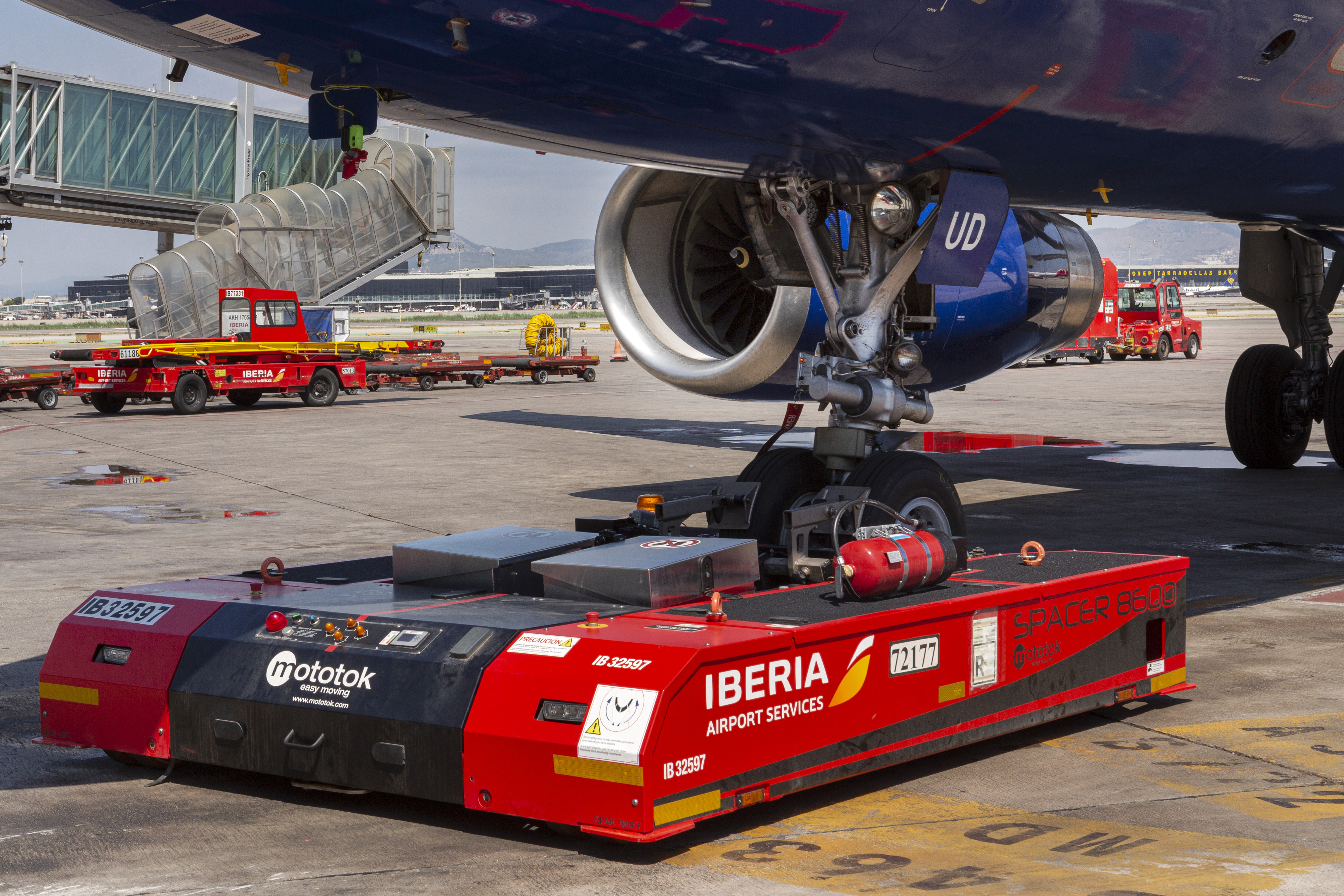 Pushback tugs comes in various shapes and sizes, and runs off either diesel fuel or battery-supplied electricity. Some are open-wheel, while others have enclosed cabs (especially at airports where the temperatures can get very cold). All are equipped with horn, lights (including turn signals), parking brake, and shifting gears. The driver sits at a large steering wheel, communicating with the pilots via headseat (either wireless or connected by cable to the communications box on the plane’s nose). Alternatively, some of the more recent, advanced tugs on the market are remote controlled by an operator who walks behind the tug as it tows the airplane.

(The tugs used by Iberia, manufactured by Germany’s Mototok company, based northeast of Düsseldorf, are remotely controlled, as well as very compact and fully electric-battery driven. Operating at a speed of 5.4 kilometres (just over 3 miles) per hour, their dimensions are 2.6 metres (just over 8.5 feet) wide by 33m (a bit over 10.8 ft.) long, with a height of just .553m (about 1.8 ft.)

When the pilots request clearance from the control tower to push back from the gate, the tug operator will confirm that all systems are go from his or her end. Also playing an important role is a “wing walker,” who ensures prior to pushback that there are no vehicles, equipment, personnel, or other obstacles behind the plane.

Once everyone is on the same page, the pilot will affirm, "brakes released, clear to push"; the tug operator will clear him or her to start the plane's engines; and pushback will commence with the use of a towbar or (in the case of Mototok) a mechanism that actually encloses the aircraft’s front wheel and lifts it off the tarmac to guide it.

It’s a fairly simple maneuver, but without it, most planes would never get off the ground. So the next time you’re boarding a plane or looking out from an aircraft window while it’s sitting on the tarmac, keep an eye out for these mighty little machines, capable of moving jetliners weighing more than 78 tonnes (more than 171,000 pounds). They’re fascinating to watch!.