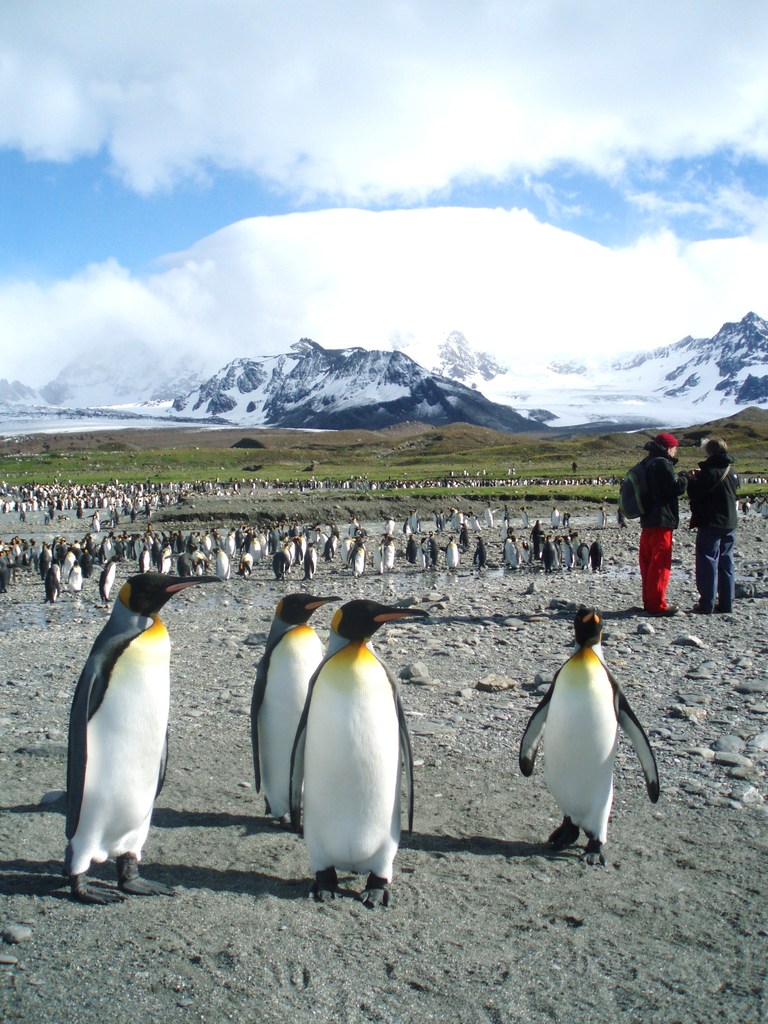 Antarctica is one of those places where history fuels a desire to step on those grounds where early explorers left their footprints and perhaps even their souls. Thus, most of the guests on board of the Plancius, owned by Oceanwide Expeditions, had perhaps not in equal measure, exploration and adventure in mind by joining an expedition to South Georgia and Antarctica. The two days spend at sea from the Falkland Islands to South Georgia, already prepared us for a journey that would be more of a personal endeavor to understand, and personify the ardor and thirst for adventure those early explorers had in spades.

Some people, who more than once had traversed this icy continent, were the early risers on our ship, the Plancius, a sturdy vessel, with gracious shapes, meant for this type of travel. As this was my second time, I clearly understood, the yearning and transfixion with this out of the way point of our earth. While there are certainly more routes than one, the shortest one just including the Antarctic Peninsula, the others perhaps including the Weddell Sea or South Georgia, most of them have in common a shared sense of solitude that most of us yearn for in our busy day-to-day lives. Never mind the fact, that in total isolation one finds nature in its purest form, no scraps of paper or waste, except of course, the natural ones left by the ever amusing penguins. What an incredible paradise!

After days at sea, spend on getting familiar with the expedition environment, such as getting in and out of zodiacs, which proved to be an art to be mastered all by itself, we were ready to start our exploration. While we went ashore in Port Stanley, a small English looking town, some absolutely determined people went out to see Rock hopper penguins while others chose the local tour, which turned out to be a barrel of fun. Riding with a native of the small town, we were entertained by stories of local politics, a school system covering only grade and high school education, and talked about the fact that this was surely a small community where everyone knew each other’s intimate history. We also enjoyed a marvelous view of the perfectly groomed beaches, on which we observed large groups of frolicking Magellan penguins. Most people afterwards set out for the post office, where I was stunned to see the most elaborate stamps, almost small paintings, which, of course were sold for quite a small fortune.

Some of our travelers, not yet immersed in the Antarctic spirit, when we set course for South Georgia, wallowed a bit about the two days spent at sea, getting there. Yet, most of us entertained ourselves with interesting lectures and long visits to the bridge, where we could trace our route, talk with Steve, an enthusiastic birder, whom I think dreams about the incredible wingspan of Albatrosses each and every night. It was also time to try on those pesky boots, of course a necessity, however, never fitting quite right, thus giving some passengers a totally different gait than normally exhibited, more like the penguins, we had yet to meet.

The rigorous cleaning of our inner and outer gear provided sobering thoughts about how one little seed that we bring in from an outer region can change the future of bird and animal species living in South Georgia. Yet the spirit of adventure and exploration endured, as with quite a bit of laughter, people found more than they expected in their pockets and seams of their jackets and pants. 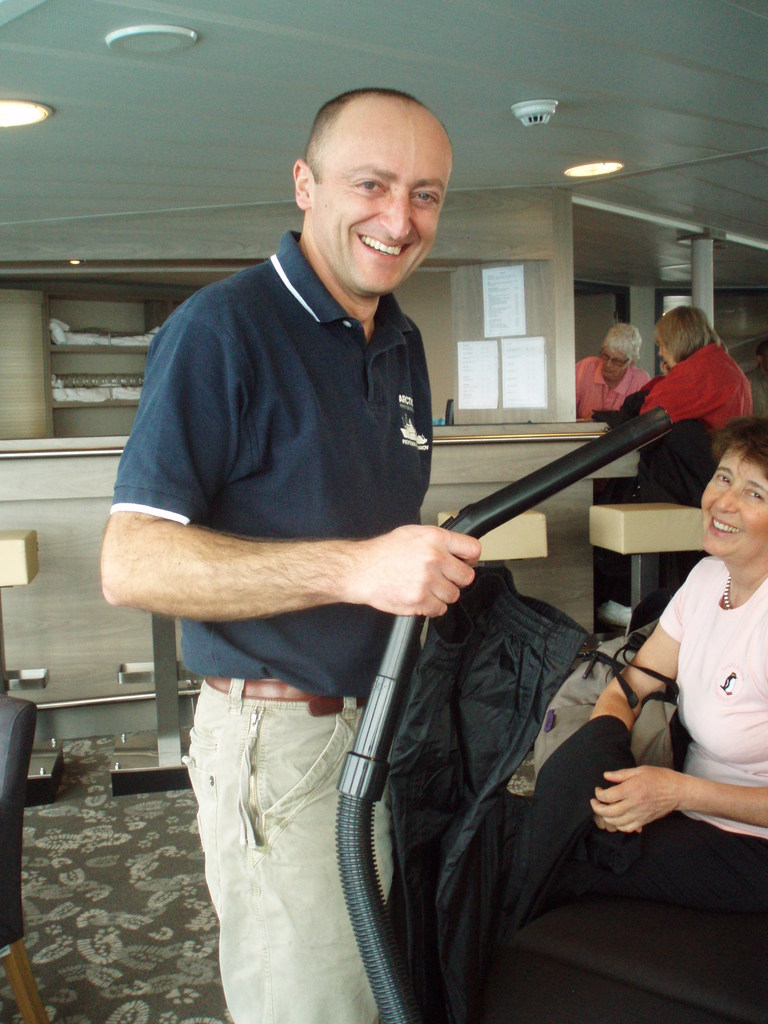 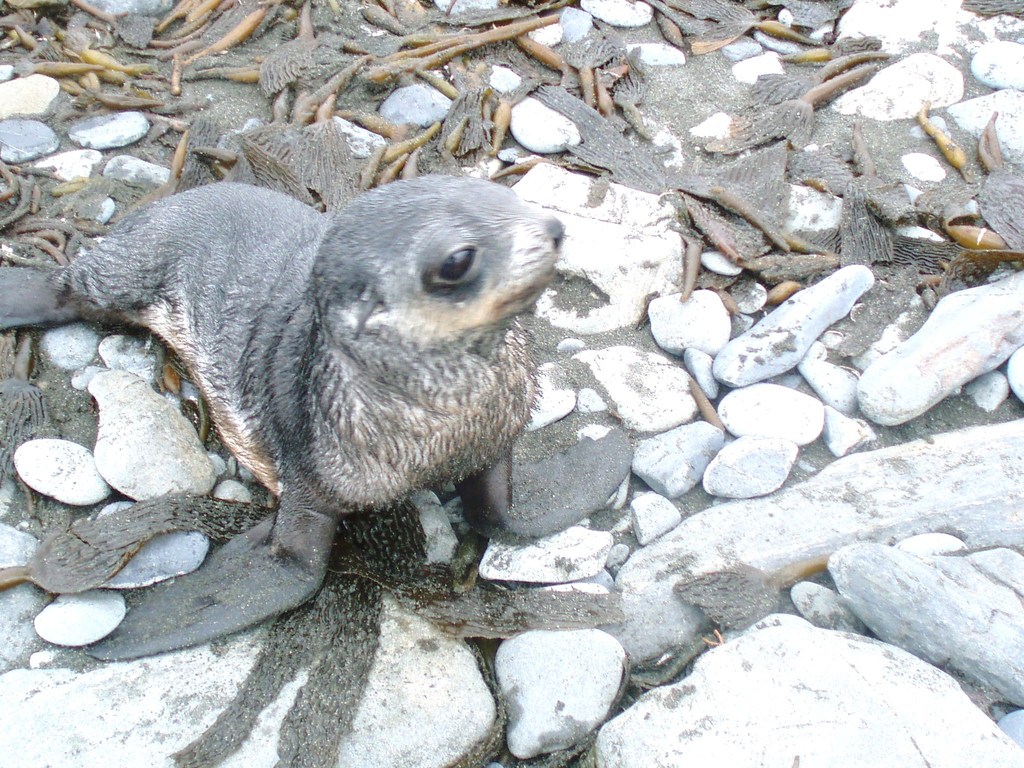 South Georgia finally loomed on the horizon, and we were excited to commence our landing process. But just one look over the railings where we boarded our zodiacs made it clear that this particular event would most likely be canceled. The waves were too high and getting into the zodiacs, never mind getting out, safety wise was out of question. Our Expedition Leader was quick to point out though that it was only morning and another landing had been scheduled for the afternoon. This time we were more than ready, one would say almost antsy, to get out there and start exploring. And so we did, gathering in small groups we were ready to face the elements. One of the more thrilling moments on shore were provided by meeting the large numbers of seals which personally I felt, had been tasked with the role of keeping us from the penguins. They barked, snarled and pursued us with passion. And being a small person, it was mightily intimidating. So climbing a hill hand by hand snatching grass, I was utterly surprised and totally frightened to see one as close as a meter in front of my face. I let loose of the grass and tumbled ungraciously towards the bottom of the hill, luckily evading, everyone else who might have been in the way. Only to get up and to try again, this time more carefully. After all, one would not want to miss any part of our exciting exploration. It was all worth it, plenty of King Penguins around, with no fear at all, just minding their own business and a great walk through the high grasses and mud to a higher point where we stood in awe of the incredible view.

More landings followed, one always grander than the other. We literally met thousands of King Penguins as far as the eyes could see. We crossed over wild running rivers, holding the steady hands of our expedition staff, facing more than our share of snarling seals, which by now I had learned to intimidate with my own nasty snarl and frantic waving of arms. Sometimes our movements were limited, because we would be on protected grounds, but always there was plenty of space to move around, or sit quietly mesmerized by the views and the utterly hilarious movements of the penguins, and seals. It was utterly amazing how eighty or so people can embark on a beach and yet literally only the sounds of cameras clicking can be heard. Everyone was in awe of the grandeur of nature.

One of the highlights of South Georgia was the stop at Grytviken, an old whaling station. Situated in a picturesque bay, it looked both enchanted (buildings that were used as a museum and shop), as well as threatening, huge rusty reminders of a bygone era. After a well deserved toast on the Grave of Shackleton, we discovered the town on our own, pleasantly surprised by the signs that explained where we were and what we saw. The church was everyone’s favorite, while the museum had everyone spellbound with its spectacularly arranged momentums relating to exploration and exploitation.

Returning back to the ship, we found ourselves enjoying a barbeque on the aft deck, a bit cold and cramped for this type of event. However, that did not keep everyone, or at least those with enthusiasms and energy to have a grand old time. Some of our fellow travelers, seemingly very timid at first , turned out to be great at break dancing, performing feats yet to be duplicated on the rest of the cruise. Of course, the wine flowed freely and endlessly. We had British guests on board for the evening, which provided new blood for overall merriment. Later that night we continued our journey along South Georgia towards the large white continent, Antarctica.

Oceanwide Expeditions has been operating in the Arctic and Antarctica for more than twenty years. The company has always been known for its active shore excursions including offering scuba diving, kayaking, overnight stays ashore and diverse programs of hiking. Their new ship, the Plancius offers state of the art technology, and a simple but elegant ambiance. It is a great environment for the first time expedition cruiser, who is testing the water, but wants to be comfortable on board the ship. Excellent lecturers are given by lecturer/guides focusing on the destination or subjects that maybe of interest to Oceanwide guests. <pre information about Oceanwide Expeditions can be found on www.oceanwide-expediitons.com

Aaltje van Zoelen is Managing Partner of World Wise Ecotourism Network, an organization that works towards tourism development that does not harm the environment and includes benefits for local people or local conservation organizations. She is a specialist in East Russia but she has traveled all over the world, including other far away, isolated natural areas which up to this time are still largely undiscovered and pristine. For more information, you may visit www.traveleastrussia.com, or her blogs www.aaltjeaworldwiseexplorer.blogspot.com and www.worldiwseunite.blogspot.com

I'll bet the museum had mementos rather than momentums.   :-)