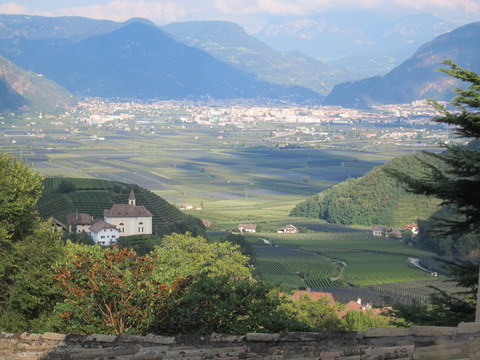 We began this adventure by purchasing a Porsche Macan S and picking the car up at the Porsche factory in Zuffenhausen, Germany... this was our “official” road trip.

This segment of the series is dedicated to our adventures touring Bolzano in northern Italy.

The Drive from Innsbruck to Bolzano, Italy

We left Innsbruck, Austria before noon for the less-than-two-hour drive to one of our favorite wine regions in Italy, Alto Adige and the city of Bolzano.  The primary road system connecting Innsbruck and Bolzano is the Brenner Pass, the lowest Alpine pass (about 4,500 feet above sea level), which has played a major role in Italy’s history for centuries.  Initially as an important trade route for Rome, it eventually it became the roadway of choice for invasions into Italy by Austria and Germany, to name just two.

Today the Brenner Highway remains a very significant route between Italy and Austria. But this time the invaders are holding credit cards and shopping bags as it is a major tourist gateway between these countries.

We are now entering a unique part of Italy known as South Tyrol, in Italy’s northernmost province. This region’s cultural fusion is fascinating as the native Alpine (Austrian) people are rooted to the land and their heritage. The impact of the World War II “adjustments” to the borders of both countries resulted in a blend of traditions, customs, wine making, cooking, and the language having a slight twist. With German being the predominant language at hotels, restaurants, and even the street signs… we asked ourselves... are we really in Italy?

As we mentioned before, Austria collects a road tax via a tax decal known as a vignette but Italy still prefers toll booths, paper tickets, money exchanges and most of all traffic chaos. Finding Bolzano was easy, but finding the hotel was a challenge especially with an address like this one:

Close but no cigar...The GPS got us to the right area but that was it.  The hotel came up as unknown.  We now had to depend on our language skills (using that term lightly) and began asking directions to the hotel near Bolzano.

Of course Bob said, “I can get us there without any more hassles” as we wound up in a vineyard, on a gravel road, with a new car, four wheeling it under a beautiful blue sky.

Funny how all castles look alike when you a seeking a landmark for your destination!

“No problem” he said as he reached for the cell phone to call the hotel… The Schloss Hotel Korb was very helpful and tried to find a landmark to pin point where we were and to guide us to their property.

With questions like: “Can you see a church steeple?  Does it have a cross or an onion on top?”  No we cannot make this stuff up… classic isn’t it?

OK, it has a cross… now what?  We were instructed to simply drive towards that structure and we will be right on course for the hotel.  Really…we are still on dirt roads in a series of vineyards and now apple orchards.

Not being the shy types (and perhaps a bit nervous), we asked yet another local and through his seven-year-old daughter (the interpreter) we were told to go down this road and turn left at the fountain and the church is down the hill on the right.

We were also advised that there was a wedding going on, so be careful as you drive past it.

As we are making our way out of the vineyard, a peloton of cyclists (about 50 +) were going by at a rapid pace… where the heck did they come from?

Following the cyclist was a bunch of celebrating wedding guests, plus the bride and groom, and a dozen or so cars blaring their horns and having a great time.

There we sat, in a cloud of dust, just looking at each other and smiled and said…welcome to Italy!

We finally found the Schloss Hotel Korb sign and navigated our way through more vineyards, but this time on paved roads. Notice the signs are in German The hotel is set on top of a hillside surrounded by vineyards, overlooking the Dolomites and the valley below leading up to the village of Bolzano... picturesque is an understatement. 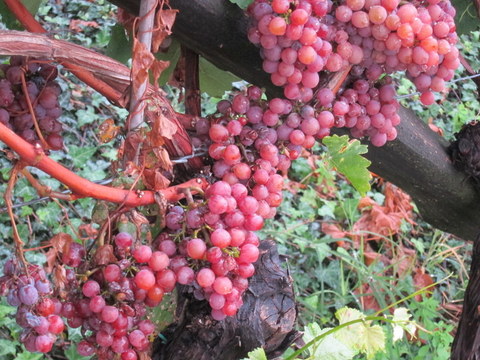 Manicured to perfection and almost ready for the harvest 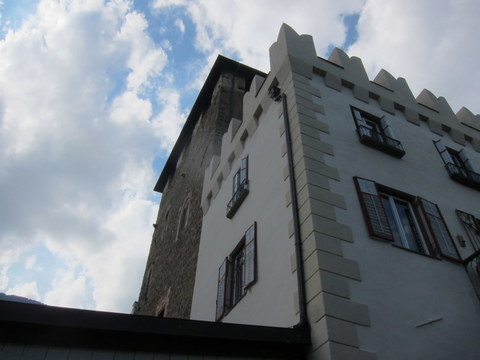 Registration Area and Foyer in the Castle 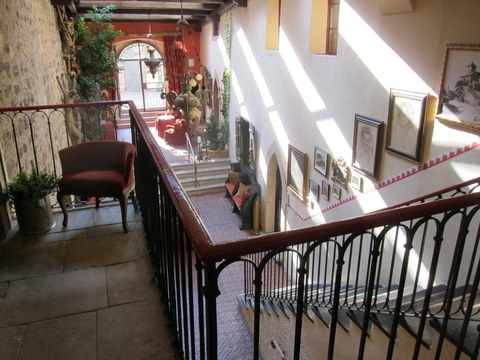 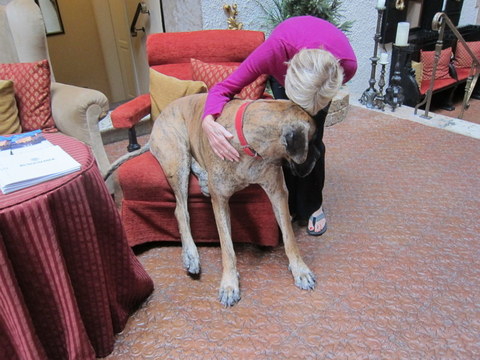 Sissi the Guard Dog and Greeter The castle host and vintner, Fritz Dellago, maintains a wine cellar which contains over 35,000 bottles of exceptional fine wines as well as the outstanding offerings from his own Fritz Dellago vineyards. Monday-night grill of beef, chicken and pork, prepared to order -

trays and trays of excellent appetizers for all taste buds As it was a Sunday, we had limited options, so we focused on visiting a unique tourist attraction, and a renowned Alto Adige wine merchant.

The gardens and tourism museum located at the Trauttmansdorff Castle are very unique tourist attractions. A section of the approximately 30-acre botanical gardens Entrance to the museum

The castle was originally the holiday residence of the Empress Elisabeth of Austria in the late 1870s and has been converted into the South Tyrol Museum of Tourism.  This museum was the first of its kind, and is dedicated to the 200 year history of Alpine tourism.

Before World War I, the area was a thriving attraction because of the magnificent scenery, luxurious resorts and hot-springs spa centers.  The picturesque landscapes became the front lines and the palatial hotels were converted into field hospitals.

These resourceful people lived through it and actually expanded upon the developments that took place.  Cable car technology was greatly expanded during the war, as was Alpine skiing, since both made troop movement/utilization more efficient.

The museum displays focused on the premise that “tourism and war seem at first glance to be mutually exclusive. This exhibition shows how closely they are in fact related.”

It turned out to be a very interesting place to visit and with the use of creative interactive displays, mechanical theater shows, films, audios and detailed exhibits, the story came alive and was not in the least bit boring. 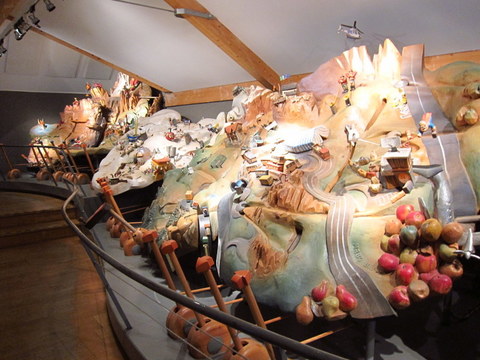 Kaltern is a picturesque medieval town, and is the hub for the over 400 wine producers that surround Lake Kaltern and the plateau area near Mendel Mountain.  The co-operative is officially known as Erste + Neue Kellereigenossenschaft (such an Italian ring to it!).

The Erste + Neue winery has been a key component in the wine trade in Kaltern for well over 100 years, and creates excellent regional Sudtirol/Alto Adige offerings.

The wines were exceptional, but we had to do a lot of quality control testing to make sure they are consistent… they were! We spent two refreshing and energizing days in the wine country of northern Italy.  We also stocked up on our favorite wine to be enjoyed over the next three weeks of our road trip vacation.

The next day, we departed for the four-plus-hour drive to Lake Garda as we dropped further into the Italian lake country.

We are heading south into the Italian lake country and warmer weather. The road trip adventure continues to enrich our travel lust and test our driving skills.  More to come on that aspect in the next part of the series.

After all, what is the hurry… be inspired.