Interesting day hikes can be found anywhere, even in Paris. Here’s one, in its western suburbs of Le Pecq and St Germain-en-Laye. It is a fairly urban walk – you will have mainly asphalt under your feet, not grass – and quite an easy one, too. So easy, in fact, that even our geriatric dog could do it. We start at the RER train station of Vesinet Le Pecq which is a short ride (app. 15 minutes) away from the RER and Metro hub of Etoile in Central Paris, just under the Arc de Triomphe. (Vesinet Le Pecq is in Zone 4, near the end of RER line A1. You can purchase a return ticket from any Metro station in Paris – all stations are equipped with automatic ticket dispensers that “speak” English – and use it also on the subway to and from Etoile.)

There is admittedly not much nature yet, but it is a genteel and rather attractive area (Londoners: think Richmond) with large houses, large front gardens ... 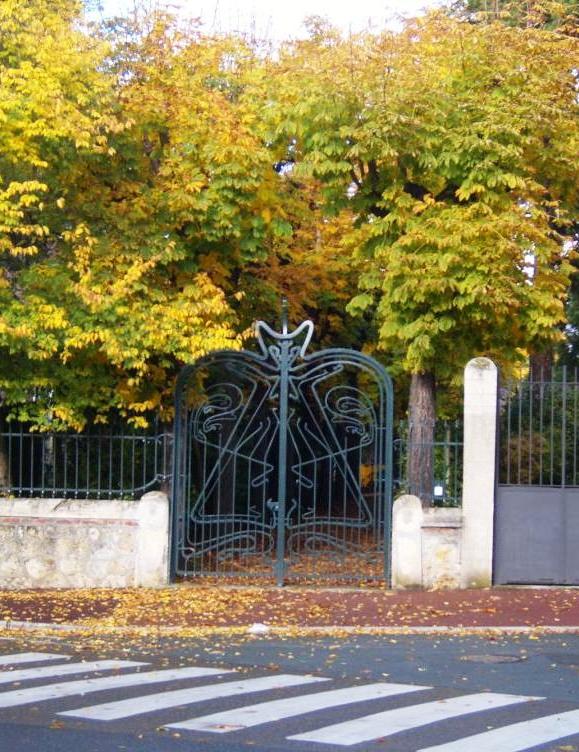 At the end of the street, you will come to a big roundabout. Continue straight-ish, slightly veering to the right, into Boulevard Carnot, passing the shop front of the Leader Price supermarket on your left.

You will now enter the Pompidou Bridge across the river Seine. On your right, you can see the Ile Corbiere. We will get a closer view of that a little later on.

The end of the bridge is flanked by twin statues of the Seine and Oise rivers (made by the sculptor Rene Letourneur), represented by two stern-looking women who appear to have spent most of their lives doing heavy squats. (Jeez, look at those thighs!). The Seine and Oise rivers meet a few miles downstream near Conflans-Sainte-Honorine, on the far side of St Germain Forest. Continue straight on what is now the Avenue du Marechal de Lattre de Tassigny and, when it swerves to the left, turn right into Rue du Souvenir-Francais. (The fortifications ahead of you already belong to the castle of St Germain-en-Laye more of which later.) Just before the cemetery, there is a narrow path uphill on your left.

We have now arrived at the “nature” part of the walk and will soon have soft grass under our feet. But first, take a moment or two to study the map on the wall. 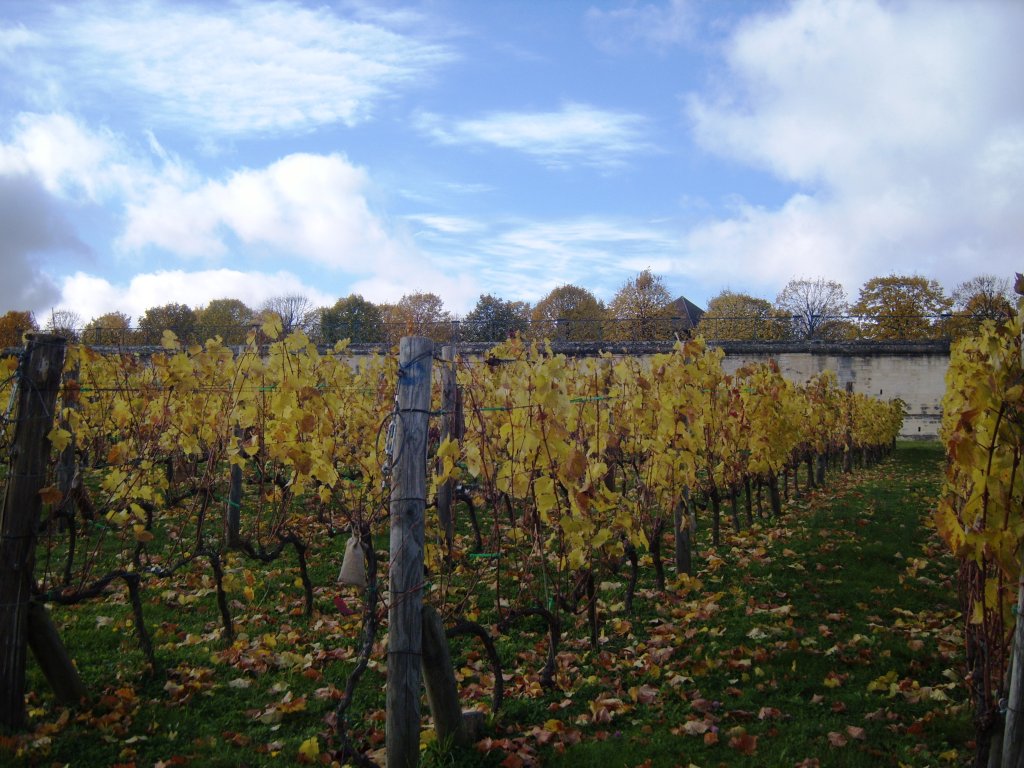 Up on the hill, turn right past the vineyard and the 2.4 km long stone terrace which is one of the key landmarks of the town of St Germain

The trail is also marked with what they call a balisage in French, a small horizontal (here: yellow) bar which is painted on trees or posts. The particular junction which is shown on the picture comes up at about the half-way mark, and you can either take this shortcut or continue the trail until you reach the village of Mesnil-le-Roi. Either way, you must take a 90 degree turn to the right and walk downhill until you reach the Seine where you turn right again, past the river and the Ile Corbiere on your left. 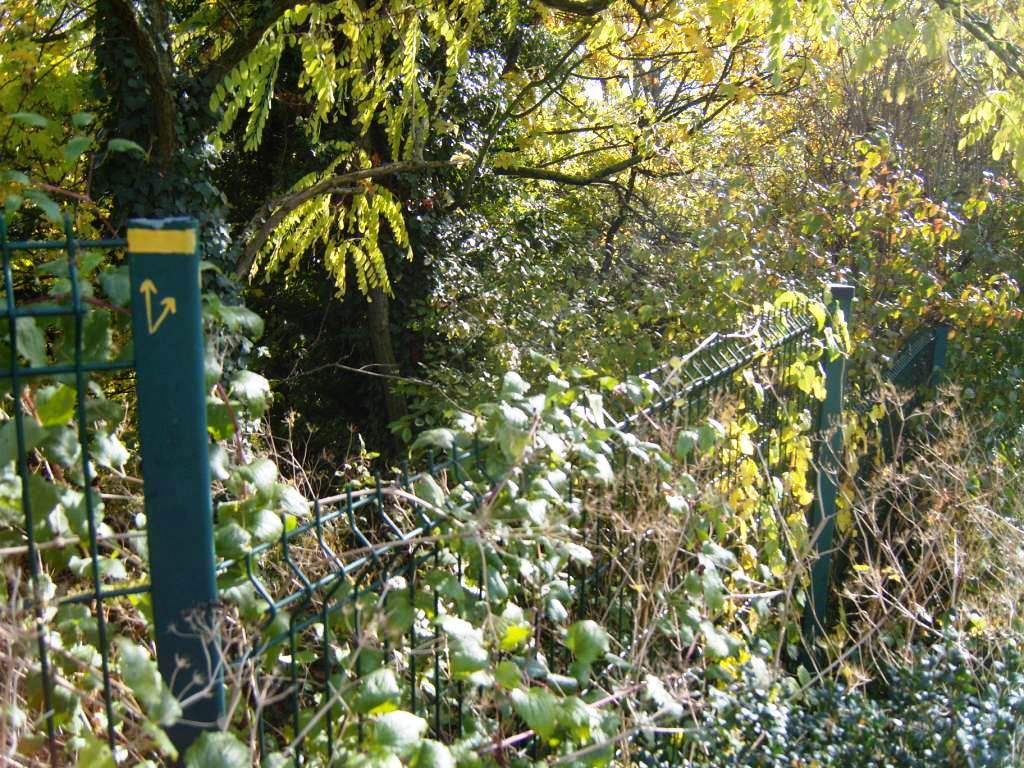 Just before you reach the tip of the island, turn right into Rue de la Terrasse, and at the end, halfway up the hill after the street has narrowed down, left into Rue de la Capitainerie which will take you past the cemetery back to the foot of the castle.

Walk up the ramp – and look to your left to enjoy the view of the valley underneath. Not to talk about the clean air for which the town was once famous: “Montagne-du-Bon-Air”, after all, was the name St Germain en Laye gave itself in 1789 when the French revolutionnaires forced all towns with “religious” names to think of something more appropriate. 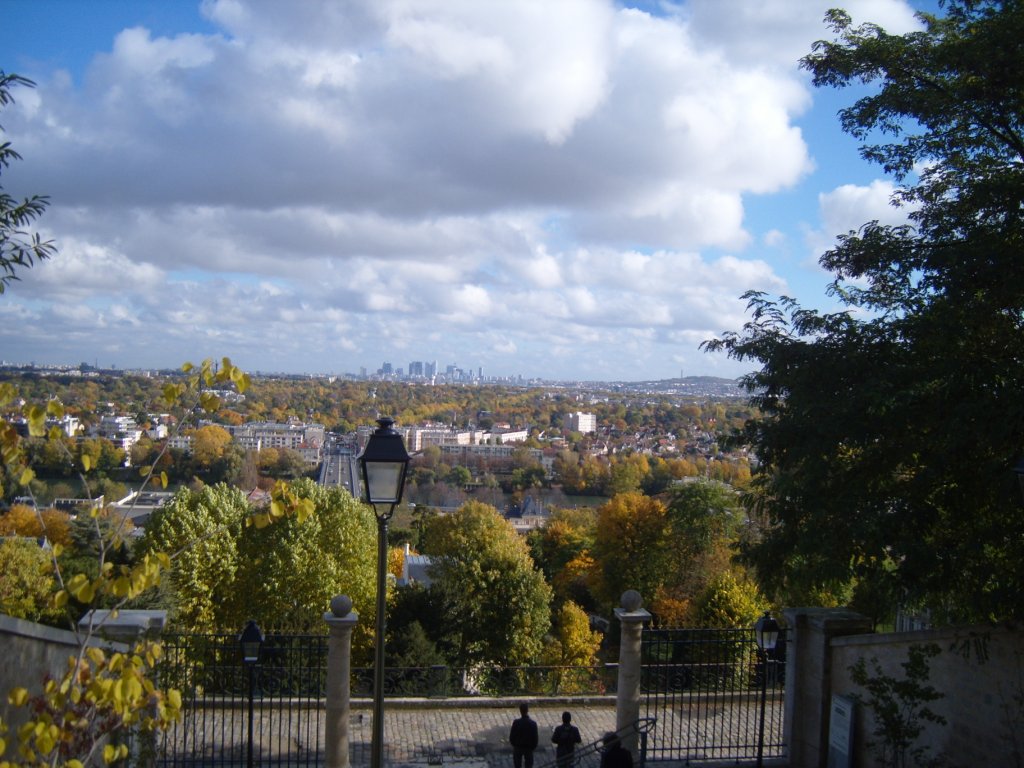 Turn into the stairway on your right that leads you towards the Pavillon Henri IV.

This is the view you have from that stairway. The high rise buildings in the distance belong to the business district of La Defense, and the toothpick that someone seems to have stuck into the little hill on the right is the Eiffel Tower.

Now turn around again and continue up the street. It is called Rue Thiers and will lead you straight into St Germain town centre. Alternatively, you can take a little detour on your right through the gardens of St Germain-en-Laye castle (which lies ahead of you on your right) and marvel at the strange French proclivity for trees that stand to attention like soldiers on parade. And at a tree that is actually square.

The castle, by the way, was built – in its current form – by Francois I in the early days of the French Renaissance. It served as a royal residence for many years and was the birth place of Louis XIV. Which explains the strange presence of a cradle in the town’s coat of arms.

If you feel a little peckish, there are some brasseries close at hand that seem just right for a little snack.

Now, our original idea was to walk back through the park after lunch, to explore the St Germain Forest behind the castle gardens and to confirm that there are still trees in the country that have escaped the national passion for order and geometry. 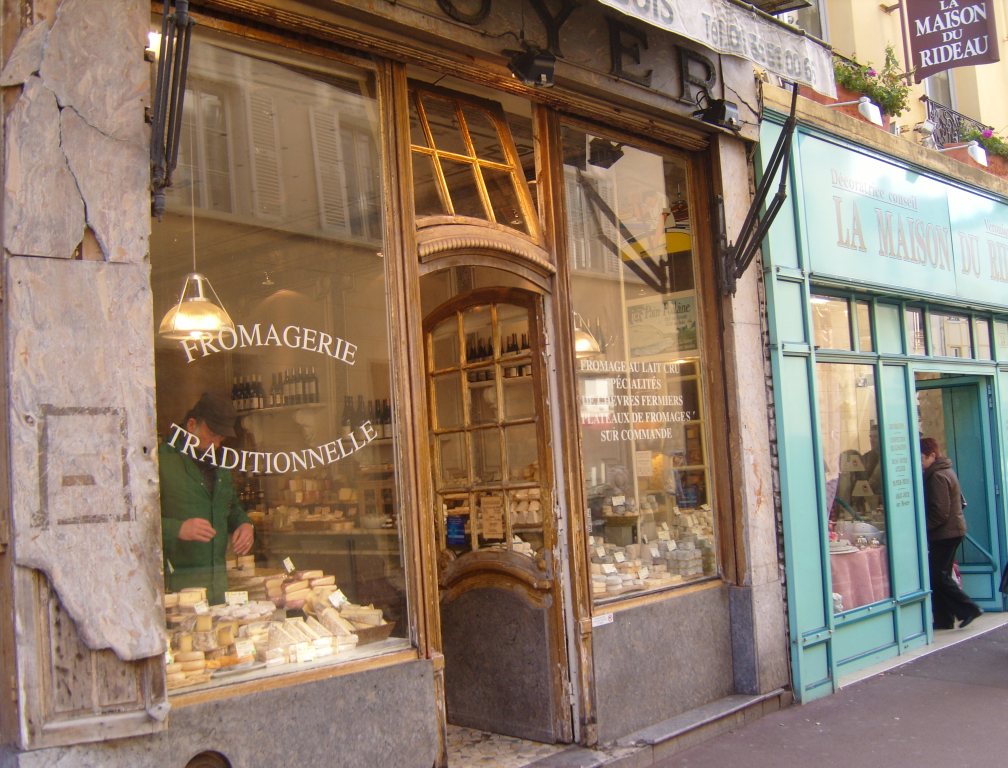 “Look”, said Mrs. S after lunch, “the dog is tired. He’ll never make it through a “real hike”. Let’s just take a short walk through the town centre instead.” And there we went.