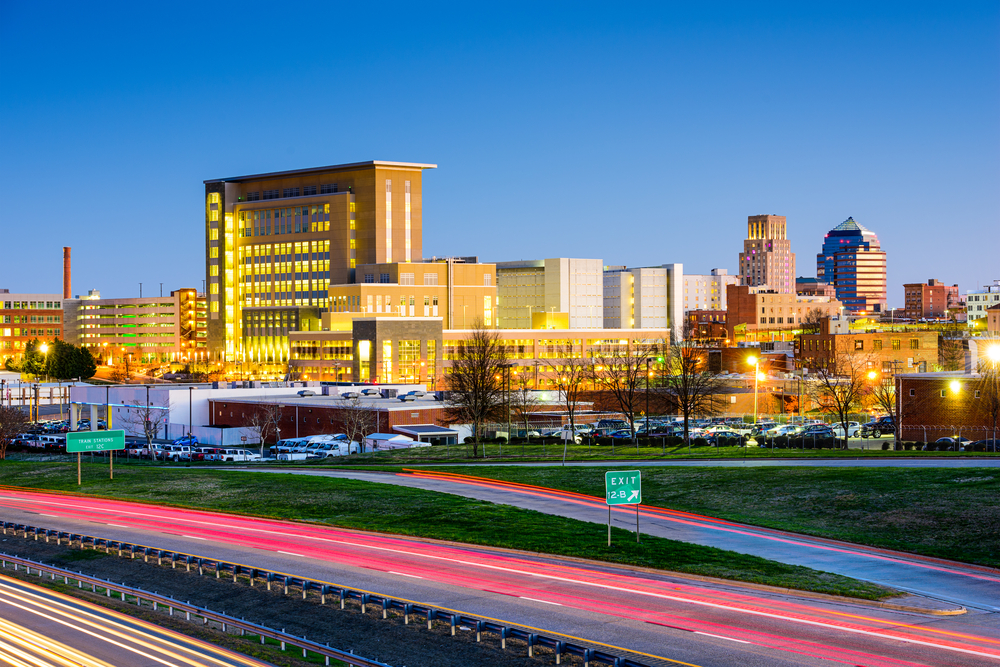 On the second leg of my business trip across the U.S. Southeast, I needed to make a stop in Durham, North Carolina for a couple of days. I was looking for a suite-type hotel with plenty of room to stretch out that… Constructed in 2008, Staybridge Suites is just off of Durham-Chapel Hill Boulevard, the primary thoroughfare that connects to every stop of importance for business (including the Durham Research Triangle), relocation, vacation, or medical travelers to the area.  Each of the property’s spacious suites offers a fully equipped kitchen, a separate work area/dining room, flat panel TVs, DVD players, and free Wi-Fi.

Other perks that the hotel offers include:

I reserved a two-bedroom suite to make sure that there was lots of space, and man oh man:  Staybridge really delivered on the real estate front – big time.  Not only was there mondo square footage to work with, the room was also clean, in great shape, and quiet (I didn’t hear a peep in the hallway or from any other rooms over the several nights that I stayed there).

My king bed was humongous, with a firm mattress, a pile of soft pillows, crisp sheets, and a plush blanket.  The good-size kitchen area featured a microwave, a full set of utensils and cooking supplies, an oven, generous counter space, and a larger than expected refrigerator.  The combo dining/living/workspace area was well-lit and comfortable.

In terms of customer service, the folks at the front desk couldn’t have been any more helpful or accommodating:  they not only let me slide with a late check out on my last day (I was held up at one of my meetings), they also recommended two legendary local restaurants that serve up delectable and memorable meals (details below).

Having never stayed at a Staybridge before, I would absolutely go back:  sometimes a bro has to claim his space, so when the need for tidy, well-appointed, and well-maintained elbow room arises (with lots of included perks), I’m 100% sold on Staybridge.

The first eatery that the Staybridge folks suggested was Crook’s Corner, located in nearby Chapel Hill (a 15-minute drive from the hotel). Given the restaurant’s rapturous reviews on Google, Trip Advisor, Yelp, Urban Spoon, and Facebook, it was clear that I was being guided in the right – and a crazy tasty – direction. Chef Bill Smith is the chef of Crook’s Corner, which has been in business since 1982.  Smith’s background includes such impressive accomplishments as: 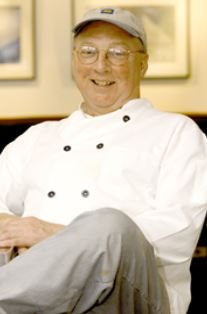 The Crook’s Corner vibe is loose, fun, and colorful, and features local artwork and some hip retro touches.  I ate on the open and airy terrace, which is festooned with knickknacks, more eye-catching art objects, mirror balls and fans on the ceiling, and a wall forest of tall bamboo.  The restaurant’s eclectic and joyous design is surefire good-mood fuel, and one would be hard-pressed to hold back a smile while taking it all in.

In terms of my dinner, it was a fantastic voyage to taste destinations that I had never visited:

Cracker Plate: “Pimento cheese & hot pepper jelly with cream cheese served with an assortment of vegetables & crackers” (menu description). I was a newbie to pimento cheese, and it was a silky, spreadable treat (actually, quite dippable as well, especially when scooping it up with the fresh, crisp vegetables).  The hot pepper jelly was zesty, and the wedge of cream cheese added nice temperature and textural balance. Shrimp & Grits: “Shrimp sautéed with bacon, mushrooms & scallions & served over cheese grits.”  According to its history, “Crook's has the reputation for being ‘the birthplace of shrimp and grits.’  The often copied dish became famous after Craig Claiborne wrote about it in the New York Times.”  This classic mélange lived up to its stellar legacy; the fresh combination of consistencies (smooth, firm, creamy, meaty, crisp) and tastes (piquant, hearty, buttery) made it an ecstasy-inducing journey. 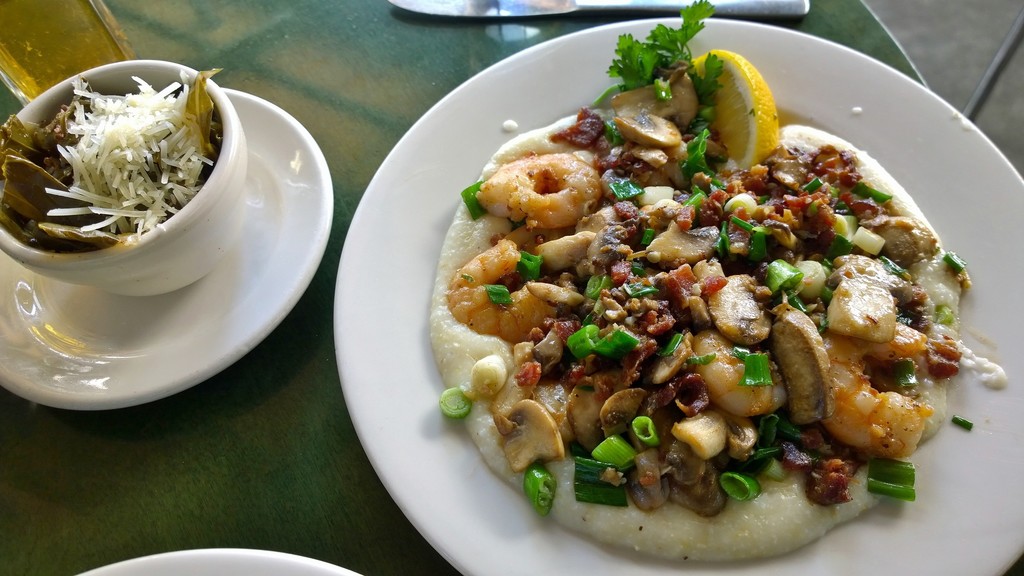 Carolina Sampler: “Chopped pork barbecue served with Hoppin’ John, collard greens, & black-pepper cornbread”.  The chopped pork was a surprise, both in its deliciousness (savory and perfectly spiced) and its consistency (not too sauce-y).  I LOVED the Hoppin’ John, which is “made with black-eyed peas and rice, chopped onion, sliced bacon, an....” The collard greens were tender and had no bitter bite, and the fresh cornbread was hearty and firm, with just the right amount of crumble. Mt. Airy Chocolate Souffle Cake: No flour, but big, big taste.  Light as a cloud and devilishly rich, like the most buoyant brownie you’ve ever eaten.  The fresh whipped cream on the top elevated the excellence. Atlantic Beach Lemon-Lime Pie: “With a saltine cracker crust and whipped cream”.  I was totally down with the sweet/sour citrus pie concept but the added saline component – which was both within the crust as well as sprinkled over the whipped cream garnish – sounded… different.  But as with all things Crook’s Corner, the result totally worked, and the interplay between the flavors was fantastic. The other restaurant that the Staybridge folks recommended was Durham's Saltbox Seafood Joint.  With 4.4 stars on Google, 4.7 stars on Facebook, 4 stars on Yelp, and 4.5 stars on Trip Advisor, it was apparent that its aquatic fare would be outstanding. 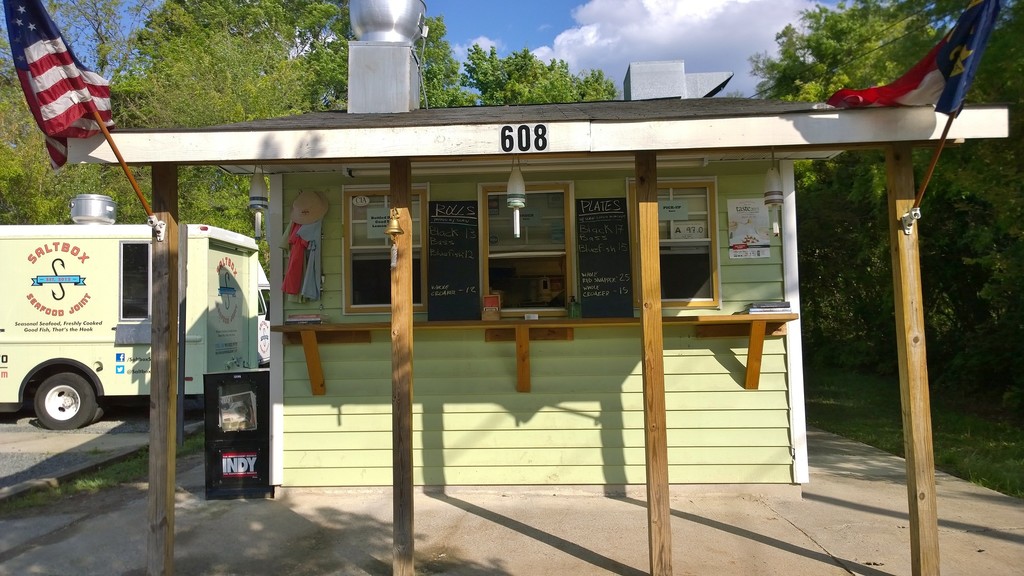 SSJ is a small, no frills "joint" with off-street parking.  Orders are placed at a front window.  According to the SSJ site, “the variety of fish and shellfish items can vary depending on what has been caught by the fishermen. For this reason, the menu is handwritten on a chalkboard with the seafood offerings of the day. All menu items are made fresh (never frozen), and prepared simple and straightforward.”  Also, while SSJ is open until 7pm Tuesdays through Saturdays, it’s understood that hungry customers shouldn’t wait until the last minute to show up, since in reality, closing time is 7pm “or until the fish sells out”.

I was totally digging the cool and loose concept of SSJ’s improvisational menu selections and dynamic “ya snooze, ya lose” business hours. Chef Ricky’s vision with SSJ was to provide gourmet seafood in a non-traditional setting that’s “authentic, simple, memorable, accessible, and delicious”, with an emphasis on fresh caught fish and local ingredients. Ricky prides himself on his diverse clientele, and insists that his customers – who are of all ages, nationalities, and economic backgrounds - are served with quality and courtesy.

My amazing dinner at SSJ featured (in the photo below from left to right):

Cole slaw: An impressively original combo of herbs, preserved lemon pulp, vinaigrette, and olive oil.  SO much more satisfying and enjoyable than the mayo-bathed mung that I’m accustomed to in New York/New Jersey delis and diners.

Bone-in local croaker: Croaker is a North Carolina favorite, and Chef Ricky served it grilled in Mediterranean spices, fennel, salt and pepper, rosemary, and lipid oil.  The unique preparation gave the firm and flaky fish, which is usually mild, a sensational flavor.

Bluefish roll: SSJ doesn’t serve sandwiches, but if all of its rolls are as tasty and luscious as this one was, you’ll be quite happy. The bluefish was lightly fried and topped with Chef Ricky’s homemade slaw, and the roll was seasoned with a combination of shrimp butter and herbs.  Perfection. 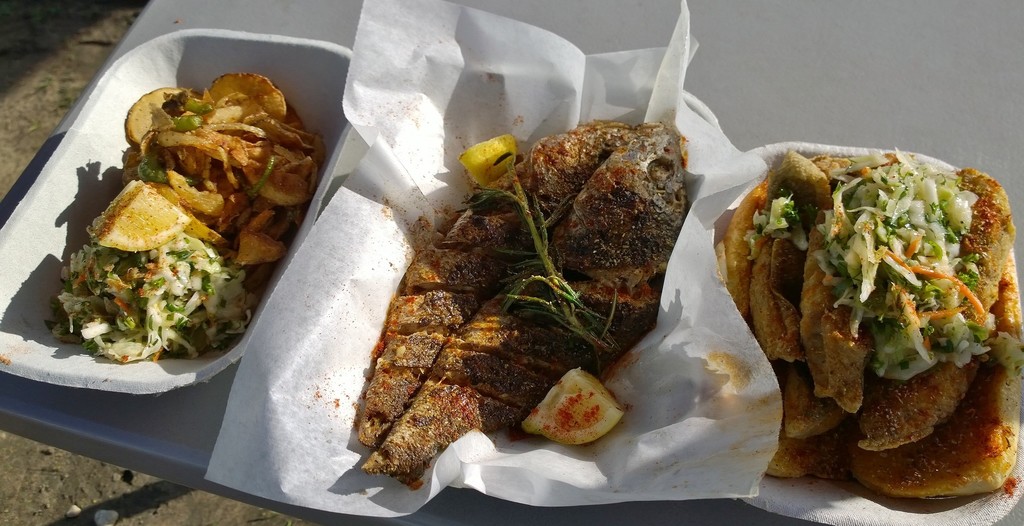 Hush honies: Chef Ricky’s version of a hush puppy, but so much better.  It didn’t have the hard outer fried crust that most pups have.  Instead, the hush honey texture is more like a mini hot dog with a nimble corn shell.  Drizzled with local honey, these hush honies were an indulgent side dish that could have easily been a delightful dessert. 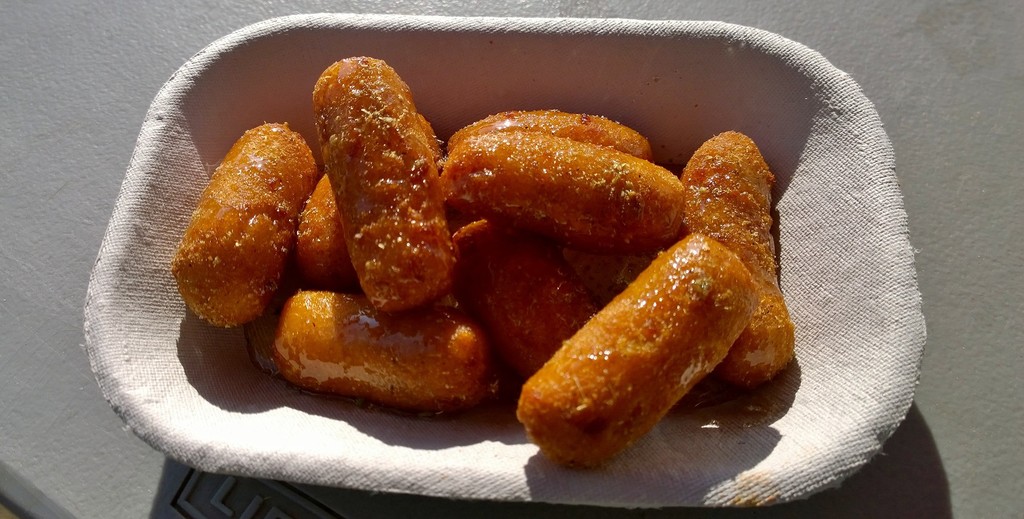 Ricky's "Good" Tea: Fruity but not too fruity or sweet.  Fresh and refreshing. While not particularly "Durham-y," Staybridge Suites delivered exactly what I was looking for:  a large, clean, well-equipped room in a convenient location with lots and LOTS of welcome perquisites for travelers.

The singular Durham-ness (Durham-itude?) of Crooks Corner and Saltbox Seafood Joint provided two of the most creative and tantalizing regional dining expeditions that I’ve ever taken.