Tinkerbell Toilet Testimonial: The Best and Worst of Disneyland's Commodes 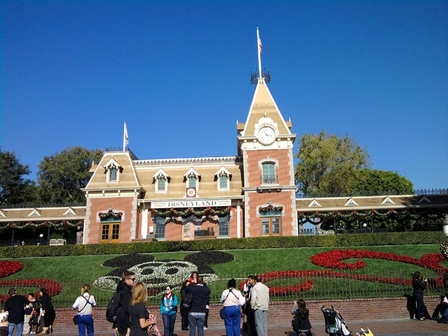 Disneyland has long touted itself as the place where dreams come true, and this is one of the rare cases where a slogan perfectly captures the essence of a place. Millions flock to Anaheim, California every year to experience the Magic Kingdom first hand, a place where adults and children alike can toss aside the real world for a few short days and experience a real life fantasy.

However, even Mickey and his friends can't hide Disneyland's seedy underbelly: the public restroom. These days, many people now carry around bottles of hand sanitizer and are afraid to touch anything in public that might contain one microbe of bacteria. So when a person is forced to "step into the office" in public, it's critical to find a facility that meets a person's needs and quells any phobias. Unfortunately, I'm sure most of us share the common experience of stepping into a restroom that would cause even the most hardened janitor to cringe.

Luckily, Disneyland takes special care to ensure that none of their restrooms cause such a reaction, but if microscopic entities still make your skin crawl and you're planning a trip to Disneyland, you'll want to read on to learn the locations of the best and worst bathrooms in Disneyland and Disney California Adventure. Through extensive first-hand research as a Disneyland annual passholder, I've compiled a list for both parks of the best and worst facilities to conduct your business. Those turkey legs and spicy corn dogs have afforded me ample research time.

The cast of employees at the park do a wonderful job of keeping it clean, but because of the enormous number of visitors, even they aren't always up to the task of keeping the restrooms spotless. Though, some are definitely more hygienic than others.

The worst: There's a tiny shack on the edge of Tom Sawyer Island facing New Orleans Square that looks like the kind of place where tools might be stored (or in this case, swords and chests of plunder). The truth is that it's neither. It's actually a restroom. With a single stall and sink, under horrible orange light and with almost no ventilation, this restroom takes the cake as worst in all of Disneyland. Unless you're in dire need to relieve yourself, ye best beware of this tiny toilet shack, especially during the sweltering summer heat.

The best: Behind a rocky enclave on the backside of the Matterhorn and next to Alice In Wonderland there sits a semi-hidden restroom that even the Red Queen would gladly call her own. Nearly every restroom in Disneyland shows its age with outdated colors and patterns, worn fixtures, displaying absolutely no relevant themes, but the Red Queen commode (as I affectionately call it) is the antithesis of the usual Disneyland restroom. It has wonderful stone walls with red diamond tiling, stall doors with faces resembling playing cards, and very low-key lighting around the perimeter walls. Best of all, it's the restroom that consistently stays the cleanest, in my experience. With relatively moderate traffic going in and out, it's the restroom where I prefer to spend my private time when nature calls.

I adore the restrooms in this park. Because California Adventure was a recent addition to the resort, opened in February 2001, its restrooms are more modern and contain themes that reflect the different aspects of life and culture in California. They remain consistently clean every time I visit.

The worst: Even though there really isn't a cringe-worthy restroom throughout the whole park, there's one that rests on the bottom of the pack, one I consistently avoid. This restroom is found in the "A Bug's Land" portion of the park, located directly across from a large water fountain that sprays children on hot days. Because this portion of the park is dedicated to children and their interests, this is also their restroom of choice. So unless you don't mind wet floors and kids trying to open your stall door, I'd wait until you come across the next restroom, which is never too far off.

The best: Located in the Hollywood Pictures Backlot next to the Hyperion Theather, this restroom remains my hidden gem. Designed in the style of Frank Lloyd Wright's Storer House of the Hollywood Hills, it's complete with his typical stamped concrete aesthetic. Due to the low traffic in this little corner of the park, this restroom remains quiet, with the relaxing influence of the low-key lighting allowing you to conduct your business in peace and stress free. Also, as with the majority of the restrooms in the park the cast keeps it extremely clean during operating hours. To this restroom and the employees who keep it clean, I say "bravo."

There you have it: the best and worst restrooms in both Disneyland and Disney California Adventure. Now even the most consummate germophobe is equipped to visit the Magic Kingdom with ease of mind. The research was gladly done-even if the cast members now assume I have some gastrointestinal problem because of my dozens of visits to their restrooms during the span of my research. Even so, the perfect restroom is well worth the embarrassment.