Whether you want to show your kids that learning can be fun, or you’re just a big history buff yourself, Dallas, Texas has what you’re looking for. Within a hour's drive from DFW airport, there's plenty of exciting history is at your fingertips. Here are several excellent examples:

Ever wondered what it was like to live in the late 19th and early 20th century? Only 26 minutes from the airport and just south of downtown, take a trip back in time with this living history museum preserving original pioneer and Victorian buildings from across north central Texas, where docents in period costumes re-enact daily life, activities, and crafts like making butter, spinning cloth, learning in an old schoolhouse, and shopping in a general store. Have an interesting hand on experience by viewing artifacts and playing games. Between 1931 and 1934, the robbery-and-murder spree of Bonnie Parker and boyfriend Clyde Barrow made them two of the most notorious criminals of the 20th century. And while it was going on, they'd often stop back here in their home town to visit family and friends. This, too, is where you'll find their grave stones - although Bonnie's family denied their wish to be buried together. You'll find hers in Crown Hill Memorial Park, a 16-minute drive from DFW, and Clyde's is in Western Heights Cemetery, 20 minutes south of Crown Hill. Some local tour operators include them on their itineraries.

Just 20 minutes north of DFW, this small city founded in the 1850s boasts a charming historic downtown along with museums and other attractions - most notably a tourist train consisting of 1920s vintage cars and locomotive running a route to/from the famous Fort Worth Stockyards. Special themed rides are available on St Patrick's Day, Mother's Day, Easter, Christmas, and so forth, as well as others oriented toward jazz/wine and Thomas the Train. 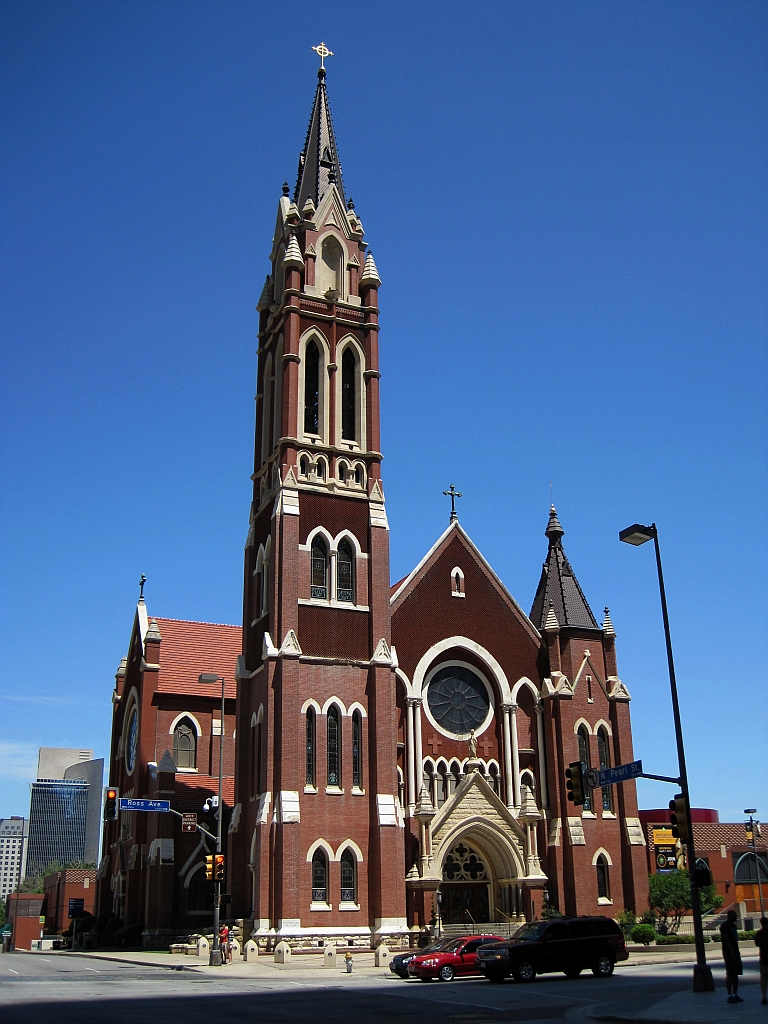 Inaugurated in 1902, in what is today the city's downtown Arts District, the red-brick, Gothic-Revival Cathedral Shrine of the Virgin of Guadalupe boasts more than 100 stained glass windows and is the USA's second most attended Catholic church.

East of downtown, but this area originally developed after the Civil War as a residential and commercial neighborhood, and in the early 1900s also evolved into something like Nashville for jazz and blues musicians, who flocked here from all over the South and Midwest, giving rise to icons such as Blind Lemon Jefferson, Leadbelly Ledbetter, Bessie Smith, and T-Bone Walker. Though it had faded by the 1970s, in the 90s live music made a comeback, and other bars/restaurants, shops, galleries, and entertainment venues as well as street murals and art sprang up in the historic buildings, making this again one of Dallas' hippest nightlife destinations.