If you only know the name of one British lake, it’ll probably be Loch Ness. It’s one of a chain of lochs making up the Great Glen, a massive fault line separating the north of Scotland from the rest of the country, from Fort William in the southwest to Inverness in the northeast.

Sixty miles separate these towns – but, when Thomas Telford dug out the Caledonian Canal joining them, to prevent shipping making the long and hazardous trip around Cape Wrath, he only had to excavate 22 miles. The rest was lochs – and deep ones! And, the longest of these is Loch Ness. One of the best ways to visit the loch is to travel with Jacobite Cruises. Their biggest boat, the Jacobite Queen, is normally berthed on the Caledonian Canal, at Tomnahurich Bridge, just outside Inverness, and makes the longest cruise. She’s a 23-metre diesel-engined former Tyne passenger ferry, and can take up to 159 passengers. Built in 1949 as the Tyne Queen, she was acquired, rebuilt on traditional small steamer lines and renamed by Jacobite Cruises in 1987.

I made my way from Inverness Railway station to the Tourist Information Centre, where I was to meet the Jacobite Cruises minibus, planning a route which would, for most of the time, keep a substantial building between myself and the weather. It was, as the Scots say, “soft” – which means bucketing it down anywhere else! And, of course, I got on the wrong bus! Jacobite Cruises do other, shorter cruises on the loch, with their other boats, departing from the loch itself.

But, the driver soon put me right, and I noticed that the right bus driver looked awfully like the skipper of the Jacobite Queen. That’s the way of it … I also noticed that, whenever there was work to be done on deck, the bar would close, and the bar staff would become deckhands! 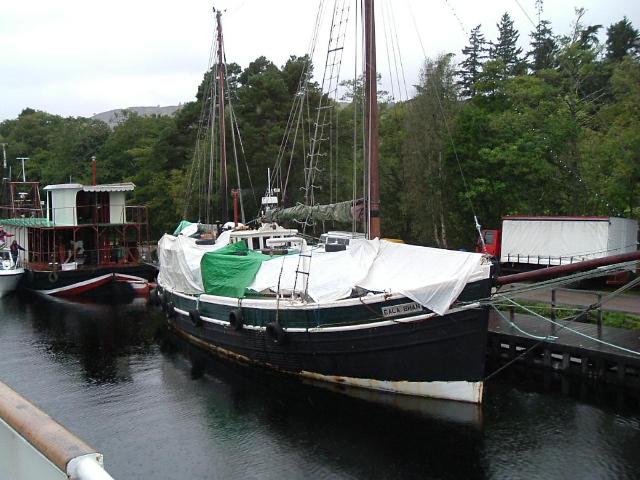 I first noticed this at the Dolgarroch Lock, where the boat had to “lock up” to enter Loch Ness. Just beyond the lock is a weir, over which any surplus water from the Caledonian Canal takes its rightful course along the River Ness.

The Bona Light – which was at one time the smallest lighthouse in Britain - marks the outflow of Loch Ness. Here, the loch proper starts.

In these somewhat dismal conditions, the loch was at its moodiest. Jacobite Queen offers both outside and inside seats, so it was an easy matter to observe the loch from the centrally-heated cabin, and dash outside for the odd photograph. And, of course, dash back in when the rain became too much!

There’s a taped commentary of what’s to be seen on the banks, interspersed with Scottish music. Then, there’s the destination – or turning point, if you bought a round trip ticket. Urquhart Castle is situated about midway along the loch, on a slight headland, so almost the entire length of the loch could be kept under surveillance. When the castle was in use, the loch was the main highway along the Great Glen – the road wasn’t completed until the 1920s. So, nothing moved down the Glen without the occupants of the castle being aware of it.

I know you’ve been dying to ask – but no, we didn’t see the Monster! I suppose my two cameras frightened her (or him) off! Jacobite Cruises have, sensibly, no opinion on his existence, or otherwise, therefore you won’t get your money back in the extremely likely event of a non-sighting.

I, too, profess an open mind on the subject. Because, Murphy’s Law dictates that, the day after I’ve gone into print saying there’s no such animal, someone will produce positive proof that he does exist.