5 Fantastic Places to Visit in Chicago 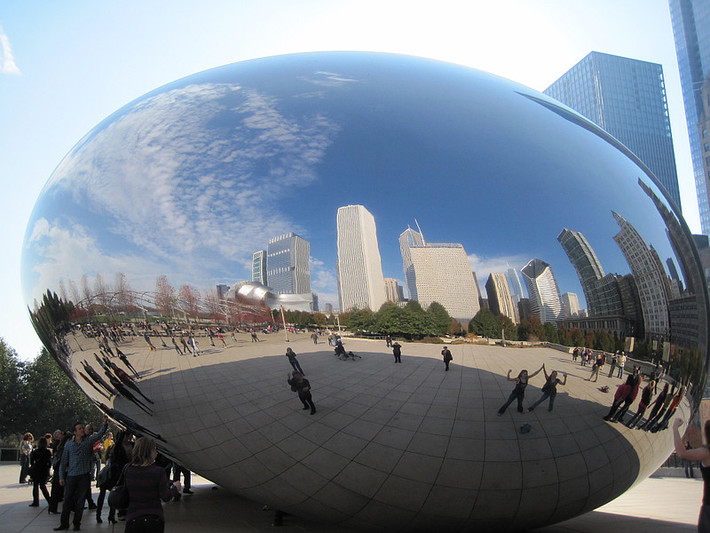 Astride Lake Michigan, the USA's third largest city is a fantastic place to visit, from its highrise downtown - with famous buldings including 47-year-old Willis Tower (once the world's tallest building, and known as the Sears Tower) and the 1920s-era, neo-Gothic Tribune Tower - to some of the world's best museums and shopping, and gets around 50 million tourists each year.

On the 94th floor of the John Hancock Tower at 875 Michigan Avenue, this observation deck affords glorious panoramas over Chicago and Lake Michigan. Besides the views, a restaurant, and interactive exhibits about the Windy City, there's also a thrilling attraction called TILT - glass balconies that tilt visitors out over the streets, more than a thousand feet up.

The redeveloped corner of downtown's lakefront Grant Park is npotable for a number of impressive modern landmarks, including the Crown Fountain, the Frank-Gehry-designed Jay Pritzker Pavilion, and especially the eyecatching Cloud Gate (top), dubbed "the Bean" because of its shape (and an amazing spot for pictures, as you can imagine), and an outdoor ice-skating rink that becomes a restaurant outside of winter.

Located on Lake Shore Drive at the southern edge of Grant Park and marking its 90th anniversary this year, the USA's oldest planetarium has theatres, exhibitions, and a fine collection of antique scientific instruments (there's also an active astronomical research observatory here). Plenty of educational fun for the whole family!

Overlooking the western side of Grant Park, one of the USA's oldest, largest, and all around finest art museums is home to more than 200,000 works from all over the globe stretching back 5,000 years - including some of the world's most famous, such as Georges Seurat's A Sunday on la Grande Jatte, Edward Hopper's Nighthawks, and Grant Wood's American Gothic. A bucket-lister for every culture vulture!

Originally built in 1916 and 1,000 meters long, this redeveloped downtown pier jutting out into Lake Michigan is home to myriad restaurants, attractions, and gardens. It's an ideal family destination thanks to highlights including a a Ferris wheel, an IMAX theater, a carousel, a children's museum, and another museum dedicated to stained glass.