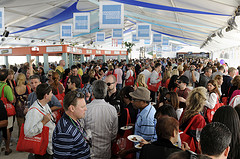 Jake stood helplessly, listlessly on line, trying to keep a sweaty grip on his smudged wine glass and trying to figure out which circle of hell Dante might consign the towering inferno that was the tastings tent of this year's SoBe Wine and Food Festival. His feet were starting to ache, his stomach was starting to sour and his ears were starting to ring. Damn Angie for saddling him with writing up this gastro-grotesquerie. Jeez, people paid $80 a pop for this?
And yet, surveying the sweltering chaos about him, he had to concede there was a kind of mad, gluttonous poetry afoot. He tried to relax a little more and appreciate the surrealness of it all. It was actually starting to work -- until he spotted those glossy black bangs, the ones he’d been avoiding for three days. And yes, they appeared to have spotted him, too. They were weaving and bobbing his way.

“Djequi, you mad with me?” Suddenly, Odete was at his side, a lot faster than he’d expected. He pretended not to hear.

She leaned in, put an arm on his shoulder. “Djequi, hello, hello! Earth to you!” Jeez, was she just trying to be cute or was she high again? He wasn’t looking at her, so couldn’t tell right away. Oh, well. Might as well get it over with.

“Hey, Odete.” He turned toward her with a weary, slightly squinty look. One definitely not just for effect.

She beamed as if he had lit up ecstatically to see her, kissed him effusively on both cheeks. “Tesão! Where you been? I been callin’ you all week! I go to your place, even!” She gave him one of those faux-pouty looks which in better times (or after more alcohol) he might’ve found adorable.


“Hey, I returned the message,” he returned coolly.

“But you no say nothing! No when we meet, what you doing, what I am doing, nothing! I wanted to say you, It been a very ’citing week! I meet this guy, Estevão, he from São Paulo like me but live here now.” She paused, belted back a slug of white from her own wine glass.


He felt like smacking it out of her perfect little manicured hand. So, Estevão. No doubt the sleazeball who wormed his way up her nostrils and into her snatch the other night at the Raleigh. Well, whatever. Water under the bridge. He took a step forward in line, wishing he could disappear. Or she could.


“So, ha-ha-ha! Listen how great is this! Estevão work with F-Stop Agency, he say I be perfect for the Sport swimming issue. My look very exotic, is very in this year, you know? É ótimo!”


“Really…” He took another step. God, to think he used to be charmed by that annoying accent and broken English.

“Yes, amazing, no?” She tossed her head in delight, her long hair seeming to ripple like a sexy silk scarf the color of midnight. “And you know? They shooting next week in Bahamas! He want I fly down with him this weekend! Djequi, the, you know, beeg break!”


Now, he had no clue as to how the Sports Illustrated swimsuit thing was in fact cast, but he he’d been around mags and models enough to be pretty sure it wasn’t like this. Obviously, the creep was in the market for a little sex on the beach. Well, it sure wasn’t Jake’s problem anymore.

“Oh, thank you!” Odete threw her arms around him, splashing wine on his neck. “Yes, I want you be proud at me, I call you when I come back! One week! One week!”

“Sure,” he said, wiping his neck -- and was next, finally at the head of the line. Turning toward the bored-looking blonde pouring the Stag’s Leap Syrah, he held out his glass. When he turned back, his ex-girlfriend was gone. And that, he thought as tried to savor his first oaky sip, was that.