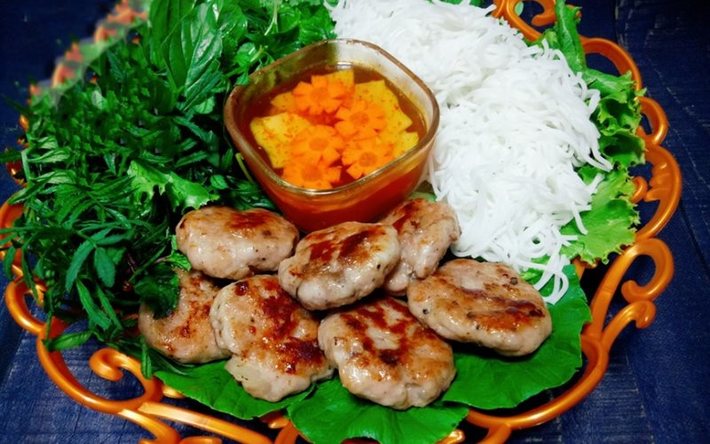 Whenever you see Bun cha, think of Bun cha in your mind, immediately its smell and taste arouse your appetite. You will imagine the melting flavorful peace of barbecued pork in mouth with a little pepper and chili taste. A dish of Bun cha must comprise of three components: Fresh rice noodles, charcoal grilled pork and dipping sauce, though the name of the dish reflects only two Bun (noodles) and Cha (grilled pork).

Ingredients and recipe are simple to prepare however this does not always mean very easy to make a good Bun cha. Bun is the soft fresh rice noodles produced during the night, Cha is made from pork grilled on charcoal until a little crispy and the color turns brown. There are two types, both called Cha, one is the sliced pork while other is the meat balls.  Not all kinds of pork meats are good for making Cha. The best pork meats to make Cha are the belly pork and the shoulder pork, the belly pork for the slices and the shoulder one for the balls. The lean pork is not used for Cha as it will be too dried after grilling and will be tough and no taste. 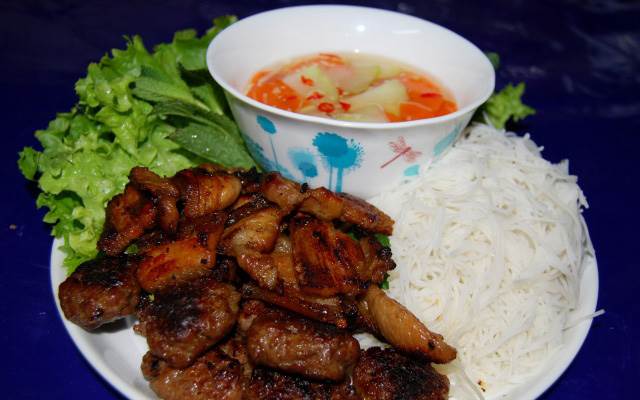 Now the soul of the dish is the dipping sauce which is made of the rich fish sauce (high protein percentage) with five other spices ingredients like chopped garlic, chili, black pepper, lime, sugar plus some green papaya or carrot slices for dressing. First, some water will be add into the fish sauce to reduce the salty, tea spoon of sugar is dissolved in the sauce then some lime juice to balance the flavors. Depends on own taste, you will add as much chili, more garlic into your own dipping sauce.

Bun cha is served with a side dish of fresh vegetable, herbs including lettuce, mint, paddy herb…. Hanoian use chopsticks and grasp the noodles from the plate then dip that noodle into the dipping sauce, they do the same with the vegetable, as a foreigner you may want assistance from a spoon too! In the former time, Bun cha was only for lunch and it was the cultural feature of authentic Hanoian. If you desire to try this Hanoi’s most authenticity, do it yourself or on a food tour provided by travel companies, their guides will explain all behind the scene and take you to sample in the best Bun cha parlor.