The 'Brown Bars' of the Netherlands & Belgium ‘Our ceilings are a fetching shade of old gold as a result of the millions of cigarettes which have been smoked on the premises since they were last painted white, and there is something homely and almost comforting about the smell of stale smoke …’

George East A Year Behind Bars.

I’m probably the worst kind of non-smoker … the ‘crusading ex-smoker’. That’s the kind of guy who, having successfully forsworn the Evil Weed, tries to persuade those around him to do the same. So, I’m probably the last person who should be writing about brown bars.

The brown bar is usually found in the Low Countries, especially in Amsterdam, but I thought I’d have a look round and survey a couple of lesser-known ones.

The Brown Bar is so called because the walls have the colour and patina of old ivory. Not, though, because of paint … that was originally white. It’s been stained to that colour by years of tobacco smoke.

We used to see an occasional one in England, too, especially in Lincolnshire or South Yorkshire, where Dutch drainage engineers or Flemish weavers made their homes.

One example used to be our local, the Flying Fish, until a new landlord decided that, after a century or so, a lick of paint might be in order. This, we agreed, destroyed the pub’s atmosphere completely, and defected en masse to the Black Horse, which didn’t have the tar-stained walls of the Fish, but did have genuine oak beams!

Many years later I stayed in a place called Zeddam, in the Netherlands, and patronised a bar called D’Olde Klok.

That doesn’t really need translation, does it? That’s what I like about the Dutch language. Although my command of it is restricted to greeting people, thanking them and ordering beer and coffee, it’s so obvious what signs and things mean. I can’t think of a situation requiring the phrase ‘Hamlet, ik ben dy vader’s spook’, but was delighted by the instruction on an ATM to ‘Steek kaarte een’ !

Anyway, to get back to D’Olde Klok, I took a moment to get used to the gloom within. If there’s such a thing as a 10-watt light bulb, they use them there! It was, I thought, a good place to drink if you were with someone you weren’t supposed to be with … in fact, come to think of it, that was probably the idea!

Slowly, I began to make things out. Paintings stowed in the rafters! And, one of them bore a close resemblance to Van Gogh’s Sunflowers. Probably, put there by some enterprising soul who wished to ‘age’ them. Maybe it was put there by Van Gogh himself, and forgotten? And, among the catholic collection of objects dangling from the blackened beams, I recognised a Delft pottery Heineken beer mug. 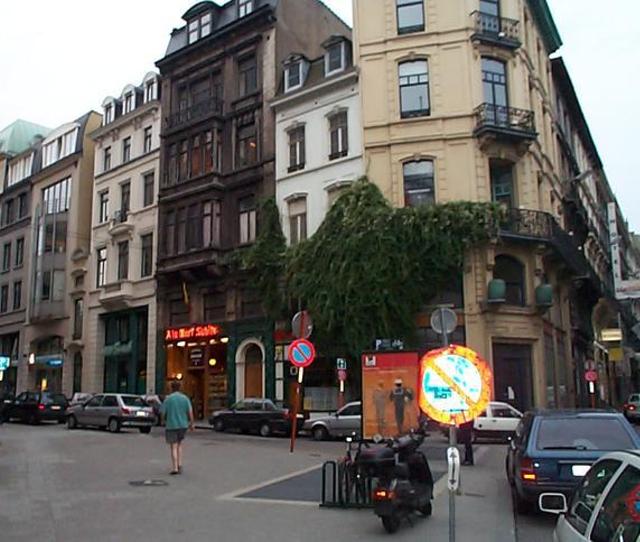 There’s a better known ‘brown bar’ in Brussels, the ‘Mort Subite’, in the rather ponderously named Rue Montaigne aux Herbes Potagères, just to the north of Grand’Place. It’s in a rather insalubrious looking street, and that maybe discourages the ‘wrong’ kind of tourist. But, it’s worth it to walk the street, and go in.

The name translates as ‘Sudden Death’. That’s not a comment on the quality of the catering … it’s often said that Belgian cuisine is French quality in German quantity, and I remember at least one memorable belt-bustin’ repast here.

Being English, I like my pubs to have a bit of history, and the Mort Subite has plenty. In 1910, one Théophile Vasson ran a bar called ‘La Cour Royale’, next door to the National Bank of Belgium. The bank clerks liked to spend their lunch-breaks there, and were fond of a dice-game called ‘421'.

When time to return to work approached, they changed the rules so as not to be late back at their desks. The shortened version of the game became known as ‘Mort Subite’

M. Vasson moved to the present location in 1928, and remembered his former customers by calling his new bar ‘Mort Subite’. It prospered … in only two years, dice-playing bank clerks were left far behind, when the then King of the Belgians stopped by for a brew. 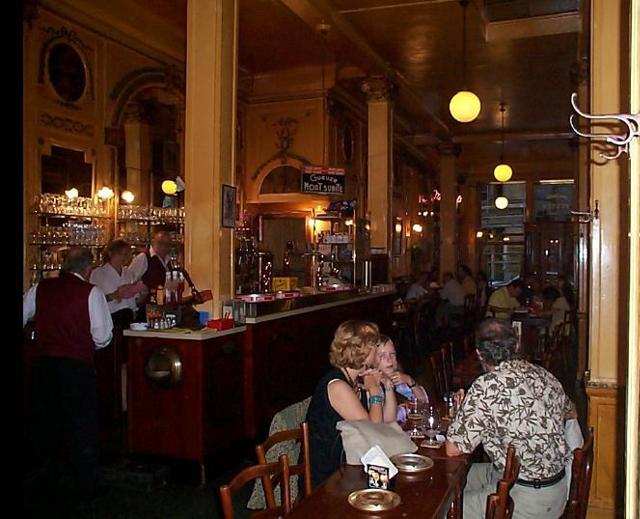 On the wall, there’s still a yellowing photograph of King Albert I, uniformed and be-medalled, and looking like he’s auditioning for a part in ‘Beau Geste’. He’s clearly enjoying his beer … but, remember this is Belgium; it’s probably against the law not to!

Not a lot has changed since they hung that picture on the wall. Except, the picture … and the walls … got yellower!

The dim lights in D’Olde Klok probably covered a multitude of sins, but the inside of the Mort Subite is blazing with light; they like to see and be seen … and they are inordinately proud of their tar-soaked walls. A guide I down-loaded from the Web told me that, on Saturday nights, ‘ ... every smoker in Belgium is there....’. Encouraged, no doubt, to make their contribution to the décor? 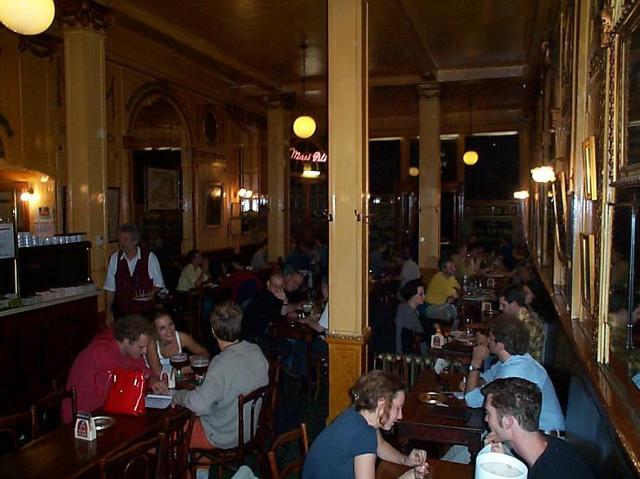 ‘Mort Subite’ is also the name for some of the good selection of beers on offer. But, I won’t bore you with a catalogue of them … I’m well aware that, even among hardened beer-swillers, zymurgy isn’t the most fascinating of subjects. But, I could change my mind if they sent along a couple of cases of gueuze!

I like the fact that the‘Mort Subite’ contains absolutely no diversions of an electronic kind, and few of any other kind. There are racks for billiard-cues, but the tables are long gone. But, it was busy without being crowded ...... and most of the clientèle seemed to be locals, many of them young.

For those who like good beer and good atmosphere, it’s well worth a call. It has a special place in my heart, because it was here, one day in 1995, that two campaigns were launched. That was the day I started my quest to ‘research’ as many kinds of Belgian beer as possible.

It was also the day I had a long, long look at those walls … and I haven’t smoked since! 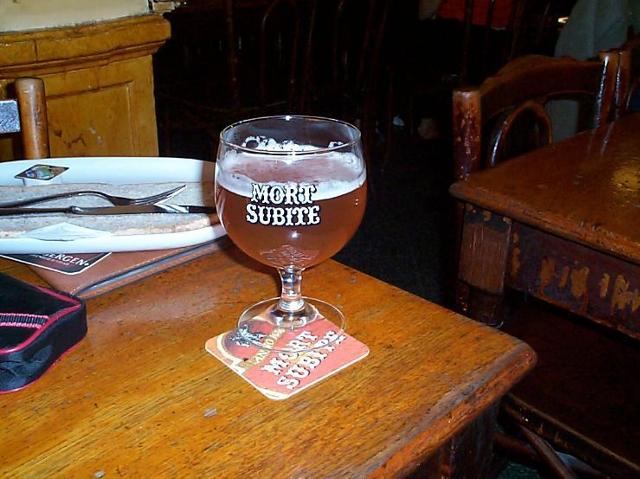