On June 12 one of the planet’s most anticipated sporting events kicks off in Brazil’s largest city, São Paulo. And over the course of the following 30 days, 64 World Cup matches among 31 teams will rotate among a dozen of this country’s other cities. Rio de Janeiro totally. Salvador certainly. Fortaleza for sure. Capital Brasilia it goes without saying. But what do you know about Natal, Cuiabá, and Porto Alegre?  Here’s a quick primer on some of the lesser-known and (to most non-Brazilians, at least) downright obscure spots where football aka soccer history is being made this summer. Belo Horizonte  BH, aka “Beagá,” anchors Brazil’s third biggest metro area, and has a lot going on (in addition to being near lovely colonial-era towns like Tiradentes, Diamantina, and Ouro Preto). In the country’s southeastern state of Minas Gerais, it’s a fairly new city, planned beginning in the 1890s, so not surprisingly, some of its highlights come in the area of modern architecture, with lots of contributions from Brazil’s most famous architect, Oscar Niemayer, especially in the Pampulha district (his São Francisco de Assis Church, right, freaked the local bishops out so much they wouldn’t consecrate it at first). There are loads of marvelous museums here, too, a number of them new, and the huge Central Market is a monument to sensory overload. Finally, BH is also considered the bars capital of Brazil, cheers! Cuiabá  Founded in 1719, the capital of Mato Grosso state, right in the middle of the entire continent in cattle country, between the Amazon and a huge wetlands area known as the Pantanal, is a fairly small city as these things go (just a half million). So there are some historic buildings and museums, as well as some good dining and nightlife, and it’s a good base for ecotourism into the surrounding natural areas and cowboy country. It can get pretty hot and steamy down here, but less so now that it’s winter. Point of interest: this is the part of the country where singer Michel Teló is from. His hit “Se Eu Te Pego” (If I Catch You) has been especially popular among international footballers, and you’ll probably be hearing it a lot in these coming days. Curitiba  South Brazil’s biggest city, capital of Paraná state, was another cow town back in the day, and known for its multicultural heritage, thanks to 19th and 20th-century immigration especially from Germany and Eastern Europe. Highlights include an 18-century old quarter; a nice botanical garden; reproductions of ancestral German and Polish homesteads; and a striking museum devoted to Brazil’s most famous architect, Oscar Niemayer (right), and other modern architecture and design. And by the way, here due to the altitude (just over 3,000 feet over sea level) it can get a little chilly, foggy, and rainy at times – not weather you’d typically associate with Brazil, for sure. Manaus  The capital of the Amazon was founded as a fort in the middle of the rain forest in 1693, and today has nearly 2 million people. It became South America’s richest city in the 1880s thanks to rubber, with its legacy the famous opera house (dome in picture at left) and other Belle-Époque architecture (including rubber baron estates you can tour), as well as cultural institutions such as the Museo Amazônico (including lots of material on the first peoples of the Amazon) and nature reserves like the Bosque da Ciência. And of course a major part of the scene is outfitters offering excursions into the rain forest, on the rivers, and to jungle lodges. 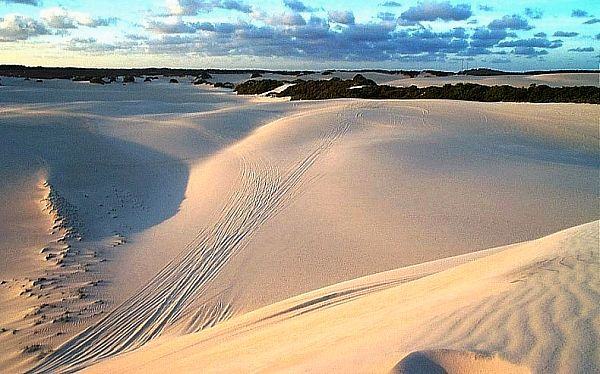 Natal  Merry Christmas! (Natal is Portuguese for Xmas, you see, so named because it was founded on that day in 1599.) Capital of the tiny state of Rio Grande do Norte at the country’s northeastern tip, this pleasant “City of the Sun,” just under one million in population, has a few moderately interesting allures, like a historic center with architecture from colonial to modernist, a colonial fort called the Three Kings Fortress, and – whoah, the world’s largest cashew tree! Didn’t see that coming. But what’s most cool about the area, besides the great nearby beaches, is a little patch of desert right nearby. The sand dunes north of the city are a sight to behold, and now you can surf them, cruise them in buggies, trek them in camels, and so forth. Of course.

Porto Alegre   The port capital of the far southern state of Rio Grande do Sul, this “Happy Harbor” of some 1½ million people, founded in 1769,  it’s a progressive city of parks and plazas, neoclassical architecture, and brisker temperature-wise than most of the rest of the country.  It also starts looking and feeling a bit more like neighboring Uruguay, with the nearby pampa (grasslands), gaucho (cowboy) heritage, and predilection for mate tea.

Recife  Capital of northerneastern Pernambuco state, with a metro-area population of 3.7 million, it’s a city of islands, canals and waterways, with some marvelous historic landmarks, including churches, convents, theaters, palaces. and one of the hemisphere’s oldest synagogues. There are also an unusual number of great museums (including one covering slavery and its abolition). Other claims to fame include a particularly fabulous annual Carnaval and some of Brazil’s best beaches, both within the city and in the surrounding region.