It’s true that Prague, with its ravishing Old Town, bangin' nightlife, and other allures, is enough to hold any visitor spellbound for an entire vacation and then some. But much of the essence of the Czech Republic flows from the cities, towns, and countryside outside the capital. Many visitors don’t make it out here, but there are some marvelous rewards easily reachable in day trips or overnights (in some cases you can even fit two spots in a single day, since they’re fairly close together). Here's just a quick selection of the highlights, and just from this country’s Bohemia region (the country also has another side, Moravia, which I'll be covering in a future post).


České Budejovice  The Czechs are of course famous for their pivo (beer), and this south Bohemian city has been known for its brewing since the 13th century (in fact, its name in German is Budweis. Yes, this is where Budweiser (which has to be labeled Budvar in the USA) comes from, and you can visit the brewery, as well as enjoy knocking around the evocative Old Town, with a mix of Gothic, Renaissance, and Baroque that will remind you of Prague (a premier local landmark is the 16th-century Černá Věž (“Black Tower“).


Český Krumlov  Also in south Bohemia, picturesquely tucked into the bend of the Moldau River, one of this country’s “museum towns” par excellence (top) has even been granted UNESCO World Heritage status. The main “sight” is its Gothic/Renaissance castle complex, the second-largest in the Czech Republic, with unique features including a wonderfully preserved Baroque theatre. There are also a couple of museums (including one devoted to Austrian artist Egon Schiele, who lived here for a time), and a bit of an adventure tourism scene in local nature (including the nearby Šumava National Park). But mostly it’s just a cool place to hang out these days amid historic surroundings, with a lively restaurant and pub scene, as well as various festivals.

Jindřichův Hradec  Yet another south Bohemian gem, and one beneath the tourist radar, JH has small-town charm, a large Renaissance castle with lovely 14th-century frescos; a Gothic palace; and in the city history museum, ensconced in a former Jesuit seminary, the world’s largest mechanical nativity scene (nearly 1,400 figures), assembled over six decades in the 19th century. 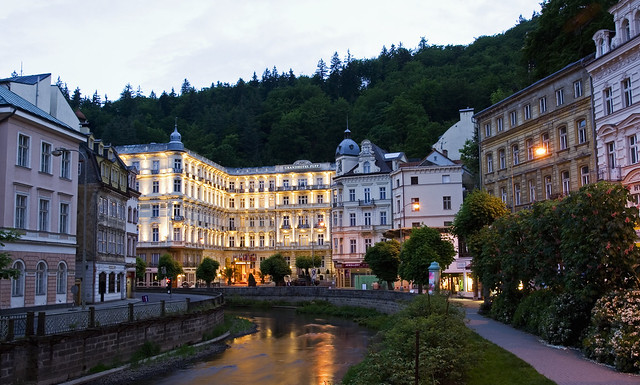 Karlovy Vary  You might know it as Karlsbad. About an hour’s drive west of Prague, it’s one of Europe’s brand-name spa towns, its historic zone a gracious collection of Belle-Époque hotels, restaurants, cultural institutions, and assorted other buildings which grew up in the 19th century around a number of hot springs (and the warm Teplá River) that are still a draw today. The most famous is the Grand Hotel Pupp (above, which you may have seen in the 2006 remake of the James Bond flick Casino Royale). There’s a well known international film festival in July, and you must try the potent local herb liqueur, Becherovka.

Kutná Hora/Sedlec  With roots in the 12th century, central Bohemian Kutná Hora is pleasant and notable for its historic architecture (fetching enough to merit UNESCO World Heritage Status) such as the impressive St. Barbara’s Church. But what any visitor should especially not miss is a visit to Sedlec, the small town right next door. Near the also noteworthy Church of Our Lady, you’ll find the Cemetery Church of All Saints, whose most fascinating feature is beneath it: an ossuary chapel where everything is constructed out of human bones (and no, here the shin bone is not necessarily connected to the thigh bone). Quite a sight, it is.

Mariánské Lázně  If you haven’t had your fill of Belle-Époque spas after Karlovy Vary, not far off, this town (known in German as Marienbad) with a 100 mineral springs, is another beautiful example (if, as I recall from my last visit, a bit on the sedate side). Yet a third spa town along very similar lines in the same area is Františkovy Lázně.

Plzeň  Here’s another place whose German name might ring a bell. “Pilsen” is the country’s fourth largest city, a couple of hours west of Prague, where bottom-fermented lager – now most of the world’s beer – was invented in the mid-1800s. The Pilsener Urquell brewery’s interesting tour ends with a tasting straight from the oak barrels. The rest of town starts with the huge main square, presided over by the Cathedral of St. Bartholomew, with the country’s highest tower and splendid countryside views; architecture fans will appreciate the sgraffitto and other Renaissance detail. Other must-sees include the Patton Memorial, paying homage to American soldiers who liberated the city in World War II, and the interactive Techmania Science Center.

Tábor  Some 90 minutes’ south of Prague, perched on a hill over Central Europe’s largest manmade lake, the 15th-century old quarter here is compact and charming. Named after the biblical Mount Tabor, the town was notorious for its Reformation-era religious freedom and experimentation — and the efforts to stamp them out in the so-called Hussite Wars. But its best-known attraction is under your feet; after exploring “up top” and perusing the Old Town Hall’s Hussite museum, climb down the steep steps to a warren of damp tunnels once used for storing food, making beer, holding prisoners, and hiding from attacks; a half mile is open to visitors.