Just like Maasai Mara game reserve, Lake Nakuru national park also receives a big number of tourists most of whom happen to be lovers of bird watching safaris. Covering an area of about 188 square kilometers, Lake Nakuru forms one of the most famous Rift valley lakes. It is known worldwide for its abundance of flamingos and other over 400 different species of birdlife.

Lake Nakuru national park was created two years before Kenya gained its internal independence, 1961. Its water is alkaline just like any other Rift valley lakes and considered to be one of the natural wonders of the world due to its abundance of birdlife and other plains game. Recently there has been a lot of pressure in the lake due to pollution from Nakuru town center and excessive deforestation although the Kenya Wildlife Authority Services have tried to do the much they can to discourage this due to its threat to tourism. All tourists are encouraged to be aware of the delicate nature of the environment they are driving through.

Lake Nakuru was the first National Park in Kenya to be set aside for protecting rhinos as a rhino sanctuary. Both black and white rhinos were introduced here from private ranches and it now accommodates over 43 black and 65 white rhinos. The highest population of all the inhabitants of Lake Nakuru are the two species of flamingos, namely the lesser and greater flamingos. The lesser flamingos outnumber the greater flamingos in the ratio of 200 to 1. Despite this difference in number, they mix very well like members of the same family and don't even compete for food since each and every species feeds on different type of foods. The birds are so attractive due to the deep coral hue of their legs and beaks and the salmon-pink plumage that they display gives the lake another alternative name: - 'The Pink Lake'.

Recent findings have proved that these flamingos and other bird species that depend on Lake Nakuru for food use the rest of other fresh water sources flowing into the lake including the hot springs that are less alkaline for bathing and drinking. It is very normal to find even a flock of over 2000000 flamingos forming a very beautiful deep pink coloration around the edges of the lake shore. Apart from these flamingos and other over 400 species of birds, there is much more than just the lake to admire.

Like the Northern shore, the lake is normally inhabited by a small family of hippos plus other 49 different species of animals in other parts of the park. This is also the best place to view the elusive leopard because of the abundance of the acacia trees that they use to hide their kill either for a later meal or to eat at leisure without disturbance. A number of Rothschild giraffes that were introduced here some years ago because they were an endangered species have also multiplied and are now a common sight. Many private travelers enjoy tours to Nakuru to see a unique vegetation of euphorbia tree forest which is said to be the largest single euphorbia forest in Africa can also be seen stretching along the eastern shore of the lake.

A good portion of this national park, suitable for day excursions from Nairobi, is covered with grassland, natural bushes, euphorbia, acacia forests and rocky cliffs contributing to a lot of support to hundreds of bird species and animals. Hurry with your camera to this paradise and take wonderful photos of different birds taking various postures and singing distinctive numerous melodious sounds that can make a king's day! 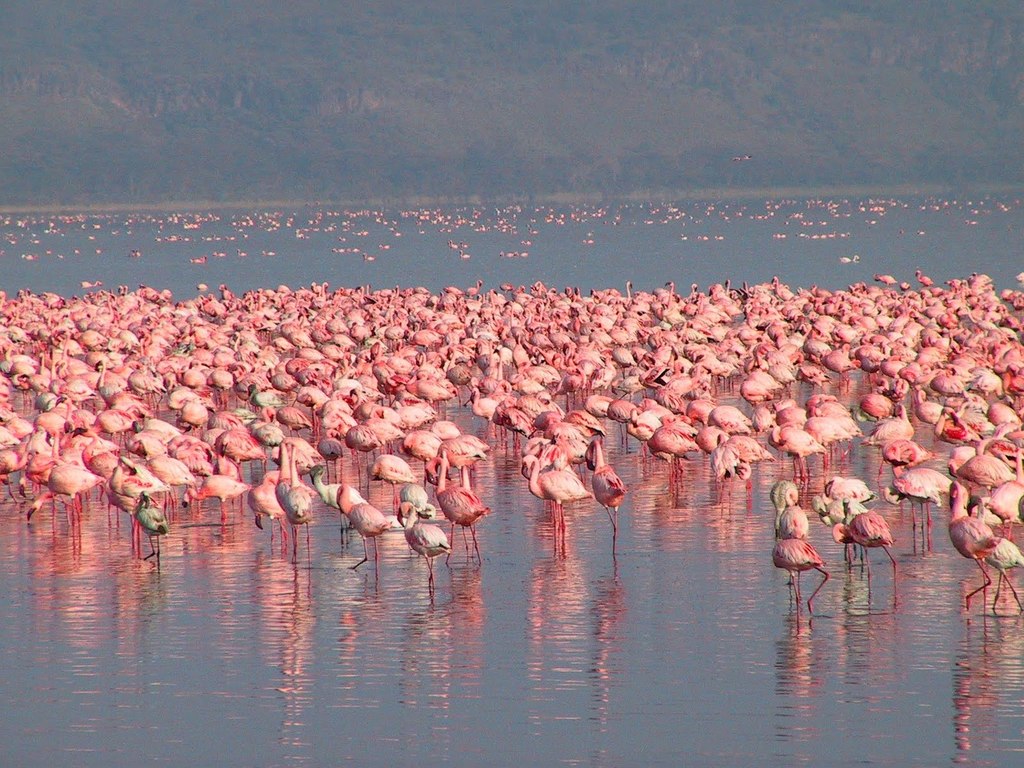