Bhutan - "Land Of Peace And Happiness"

Located in the eastern end of the mighty Himalayas, Bhutan is the last existing Buddhist kingdom in the world, overlooked by neighbors like India, China, Nepal, Bangladesh and India's North-Eastern state of Sikkim. Being surrounded by mountains full of lush greenery, Bhutan is fabulously rich, in terms of scenic beauty, which makes it an alluring tourist destination. 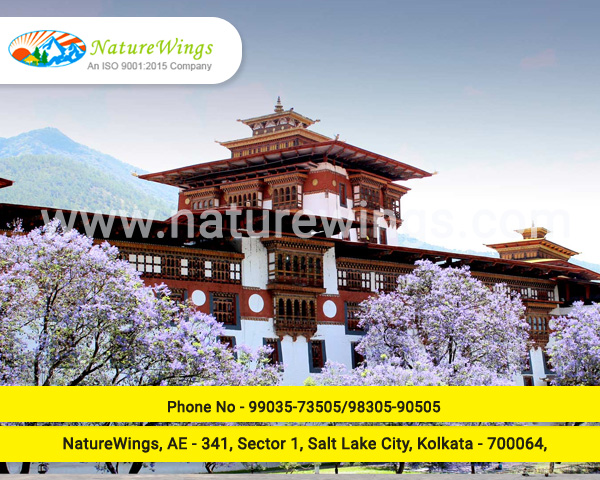 Meet & greet on arrival and as the aircraft enters the Paro valley, look down and you will see the Paro Dzong on the hillside overlooking Paro Chu (river) with Ta Dzong, You will be received by our representative at the airport and On the way to Paro, halt at Chojum to take photographs of confluence of two rivers of Bhutan, Thimphu Chu and Paro Chu. Reach Thimpu and entire day is free to roam around Thimpu.

Trashi Chhoe Dzong - or the Fortress of the Glorious Region is another 'must visit' site. Situated on the west bank of Wang Chhu river, Trashi Chhoe Dzong is the formal coronation site of the fifth King. The Dzong also hosts the annual Tsechu festival. Built in 1641 by the political and religious unifier of Bhutan, Shabdrung Ngawang Namgyal, it was reconstructed in 1960s in traditional Bhutanese manner, without nails or architectural plans.

National Library - Housing an extensive collection of priceless Buddhist manuscripts; the Institute for Zorig Chusum (commonly known as the PaintingSchool) is where students undergo a 6-year training course in Bhutan's 13 traditional arts and crafts.

Buddha View Point - A place from where you can get a good overview of the Thimphu valley is from the Buddha point (Kuensel Phodrang). You can pay your obeisance and offer prayers to the Buddha, the largest statue in the country and then walk around and take a glimpse of the valley.

Memorial Chorten - Also known as the Thimphu Chorten, The Memorial Chorten (a stupa dedicated to world peace and prosperity in 1974 in memory of the Third King of Bhutan).

Takin Zoo - You will find the National animal of Bhutan 'Takin' in this open zoo. Takin is one of the most endangered species of the World and it is available only in Bhutan.

After breakfast, start for Punakha. One the way, visit

Dochula view point stop: The first stop after leaving Thimphu on the journey is Dochu La Pass around 3100 m high and way above the clouds. Only an hour's drive from Thimphu, it offers visitors their first glimpse of the Eastern Himalayan range. From the pass the road curls its way down into the relative lowlands of the Punakha Valley. Before Thimphu was made the permanent capital of Bhutan.

In Punakha , you also visit

Punakha Dzong - beautiful Punakha Dzong(known as the "the palace of great happiness" ),located at the confluence of the Pho Chhu (father) and Mo Chhu (mother) rivers in the Punakha-Wangdue valley. the cityÃ¢â‚¬â„¢s dzong is one of the most picturesque of all Bhutan's ancient fortresses The dzong is joined to the mainland by an arched wooden bridge, and contains many precious relics from the days when successive kings reined the kingdom from this valley.