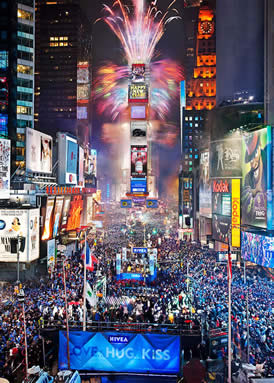 Everybody agrees that the two top places to ring in a new year are Times Square in New York City (right) and anywhere in Las Vegas. But there are other interesting, free, even quirky New Year’s Eve celebrations in the USA, from a cheese party in Wisconsin to a pickle party in Mount Olive, North Carolina.  Where to go if you don't want to welcome 2013 with a million of your closest friends?

Pickle Party in Mount Olive, North Carolina -- The 12th annual pickle drop is a fun-filled and free event which entails the lowering of a glowing, three-foot long pickle from the flagpole of the Mount Olive Pickle Company. The pickle proceedings are at 7 p.m., or midnight Greenwich Mean Time, so the event can be perused by pickle fans in Europe, where the drop is just after midnight. There’s also pickle tasting and a polka party preceeding the pyrotechnics.

Three's a Charm in Key West -- Florida's southernmost point offers three distinct—and eccentric— events. Celebrate the 18th annual conch shell drop at Sloppy Joe's Bar, watch as a "pirate wench" is dropped from the top mast of a historic ship at Schooner Wharf Bar, or head to The Bourbon Street Pub where the drag queen, "Sushi" is lowered in an oversized, red high-heeled shoe to ring in the start of 2011. Fishy Festivities in Port Clinton, Ohio – This outpost, also known as the "Walleye Capital of the World," celebrates New Year’s Eve with the exciting Walleye Drop. This celebration includes games, fireworks and the dropping of a 20-foot, 600-pound walleye fish named Wylie at midnight. Attendees can warm up with walleye-themed food and
drink, including walleye chowder, and a local wine specialty called, "Walleye White."

Rockin' Around the Clock in Memphis -- New Year's Eve is celebrated rock 'n' roll style starting at 8 p.m. in the heart of downtown Memphis. Get into the groove with live music from the band Rock Sugar and enjoy the festivities on famous Beale Street. At midnight, event-goers huddle at the Hard Rock Cafe to catch a glimpse of the 10-foot Gibson guitar dropped from the evening sky.

The Giant Peach in Atlanta -- For more than twenty years, Atlanta has drawn a crowd of more than 100,000 onlookers for its New Year’s Eve Giant Peach Drop. At midnight, a massive 800-pound peach descends from 138 feet in the heart of downtown, and afterward, the party continues at Atlanta's Underground, where clubs and nightlife throb until dawn.

Say Cheese! in Plymouth, Wisconsin – Cheddarheads and fans enjoy the midnight drop of an 80-pound cheese wedge down a 100-foot ladder truck. The celebration takes place in the Creamery Building parking lot, and features live music from local bands.

A Nutty Time in Raleigh, North Carolina -- Nineteen years ago artist David Benson created a 1,200-pound acorn (above left) out of steel and copper in honor of Raleigh, "The City of Oaks." Ever since, the acorn is dropped on New Year's Eve at City Hall Plaza, and not just once. The first drop is at 7 p.m., for families with young children, and then again at midnight for those who are out until the clock reaches twelve.

Where are you celebrating New Year’s Eve and the arrival of 2011? Wherever, and however, please don’t drink and drive, and my best wishes to you and yours for the new year.

I have witnessed the Mummers' Parade many times and found it pretty "quirky," but this Philadelphian must admit that you have found events that are quirkier by far!