If you can't make the 2019 early arrival of Japan's cherry blossoms -- expected to reach Tokyo on March 22, 2019, according to the Japan Meteorological Agency, never fret. There are plenty of spectacular spring flowers within an easy day trip from Tokyo, to impress you with their beauty and make you grateful that you conveniently missed the sakura crowds. 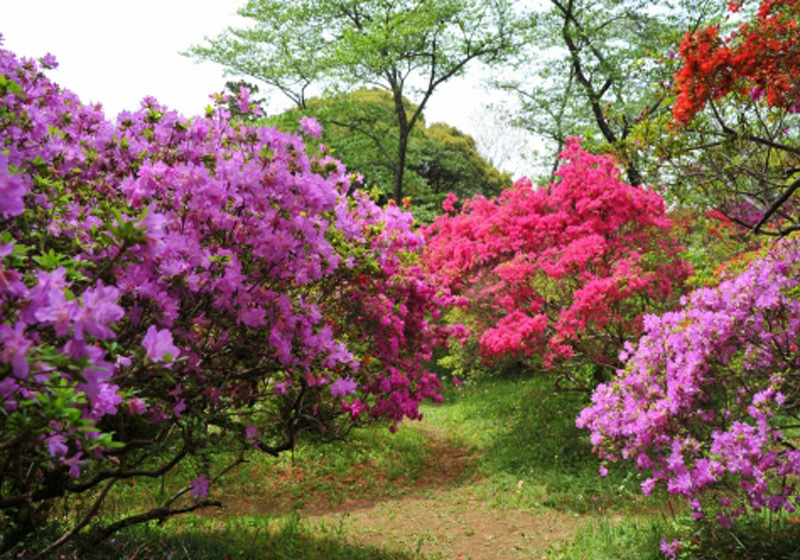 The sprawling, 70-acre Shimizu Park, within the grounds of Konjoin Temple, was established in 1894 as a nature park. It was developed to preserve native clusters of Kirishima and Omurasaki azaleas. Visitors can freely explore the more than 20,000 azalea trees, in 100 varieties, throughout the park. They can even witness some 300-year-old Kirishimas and stroll under an archway of colorful azaleas in full bloom. (https://www.japan.travel/en/spot/2233/) Ashikaga Flower Park is famous for its 350 magnificent "Ofuji" (wisteria trees) and more than 5,000 azaleas. 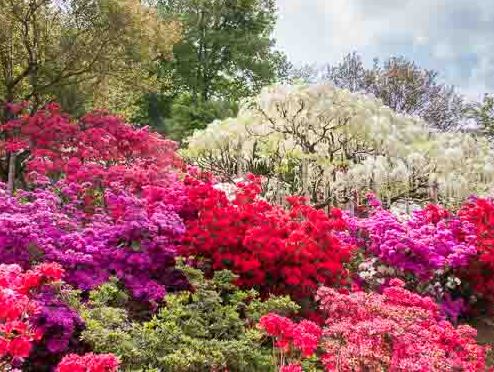 The 23-acre facility attracts more than 1.5 million visitors per year but is most beckoning during its "Wisteria Stories" event. Held between mid-April and mid-May, the event highlights the blooming of the park's mega-wisteria tree. Occupying 11,780 square feet, it is the symbol of the park itself.  There is also a 263-foot white Shiro Fuji wisteria archway "tunnel," a designated prefectural natural monument. Wisteria claim a long and beloved history in Japan, where they were even featured in 8th-century Manyoshuu poem collection -- Japan's oldest known compendium of poems. Today they remain a jewel, and in 2014 they were featured as one of CNN's "Dream Destinations." https://www.ashikaga.co.jp/english/index.html

Directions: On Saturdays, Sundays, and holidays: Take the Limited Express Ryomo on the Tobu Line to Ashikaga-shi (75 min.), and then pick up the free shuttle bus to Ashikaga Flower Park (30 min.) ... On weekdays: Take the Tobu Line from Asakusa station to Tochigi station and transfer to JR Ryomo Line. Get off at Ashikaga Flower Park station and walk 3 minutes to the park entrance. (About two hours total)

This beauty spot has an international reputation thanks to its colorful azaleas, which take center stage during the "Tsutsuji (Azalea) Festival," early April to early May. The festival attracts 100,000 visitors annually, who come to immerse themselves in a land of color from magenta to chartreuse and various shades in between. One particular azalea, the "Kotonaishiiai Azalea," is said to be 800 years old. 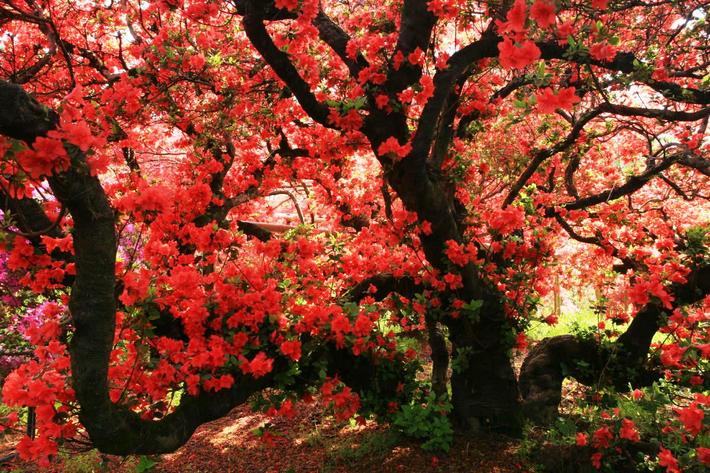 Tatebayashi is also famous for its delicious udon noodles, renowned for their soft and smooth texture. Local restaurant Hanayama Udon serves up this favorite dish in a tanuki (racoon-like creature) - shaped bowl. http://www.city.tatebayashi.gunma.jp/tsutsuji/english.html Nearly 20 acres with nearly one million flowers of 4000 different varieties. In spring, the contrast between the azure nemophila and other flowers is particularly stunning. In late April, its 3,000 rose bushes in 1,500 varieties all bloom at once! This naturally inspired rose garden is considered the most beautiful in Japan. [[http://treasuregarden.jp/en/ 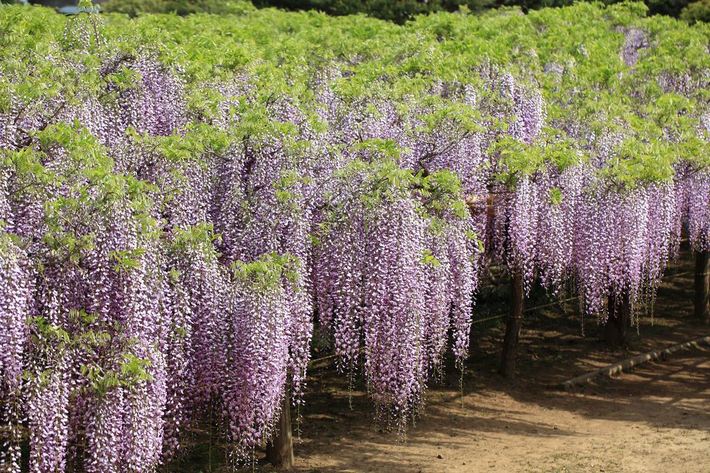 Here visitors can see "Fuji" (wisteria) as soon as they arrive.  Along the main "Fuji Dori" ("Wisteria Street") that runs from the west entrance of Kasukabe Station, a gorgeous wisteria trellis extends for one kilometer (.62 miles). Set along the sidewalks on both sides of the road, the wisteria trellis features 218 trees of seven varieties. On the last Saturday of April, the Kasukabe Wisteria Festival will be held, featuring taiko drumming and children's dance and cheerleading performances. http://www.city.kasukabe.lg.jp/multilingual/index.html

About Tobu Railway Company Ltd.
TOBU Railway Company, Ltd. is a major Japanese corporation consisting of approximately 90 companies. The Tobu Railways cover the longest operating distance in Metropolitan Tokyo and lead to numerous tourist attractions including: Asakusa and Tokyo SKYTREE TOWN in Tokyo; Nikko and Kinugawa Onsen, famous its world heritage sites and hot springs; the Tatebayashi and Ashikaga areas, known for beautiful blooming flower fields; and Kawagoe, where the atmosphere of the old Edo era lives on. Tobu is also invested in numerous hotels, including the highly anticipated luxury properties: Nikko Fufu Resort and The Ritz Carlton Nikko, both of which will open in 2020, in time for the Tokyo Olympics.