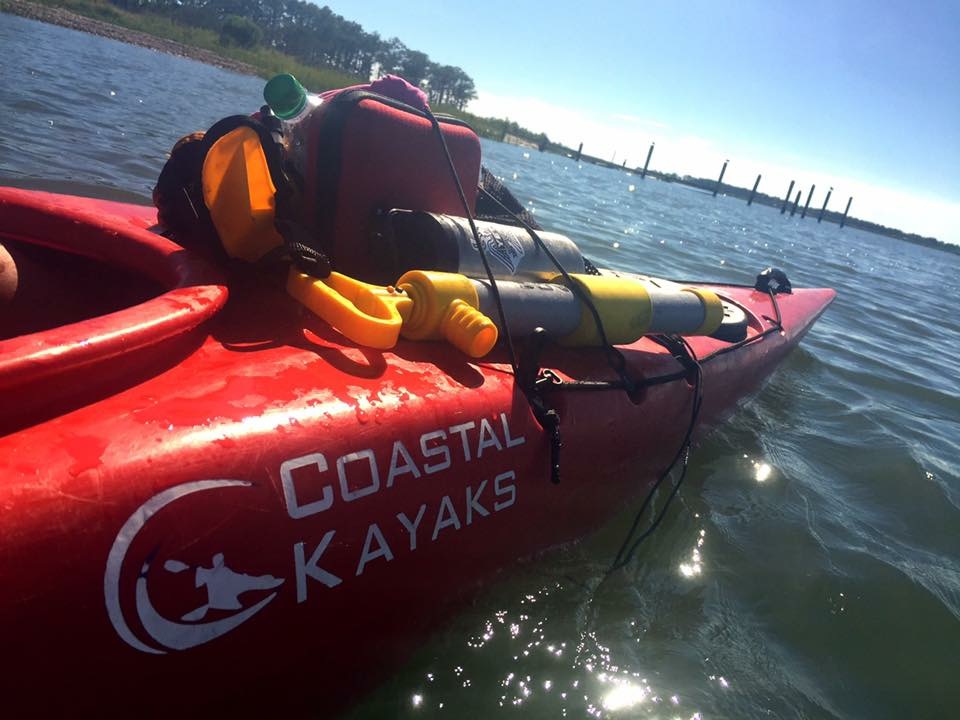 The laid-back pace of Chincoteague Island, Virginia is perfect for visitors who want to turn off their engines, hang loose, and soak up the stunning beauty of the surroundings.  But for vacationers who, after they’ve appropriately chilled out, begin itching for stuff to do, there’s plenty of memorable action to choose from.

Based on tips from the good folks at Fairfield Inn &  Suites by Marriott, Chincoteague Island, here’s a trio of excellent activities that I checked out and experienced with my family.  Each will get you moving and also allow you to appreciate the island from a different P.O.V.: Kayaking is a popular way for visitors to get a close look at the sites along Chincoteague’s coastline.  Assateague Explorer and Chincoteague Outfitters both provide kayak tours, but the tour provider that I kept hearing great things about was SouthEast Expeditions (SEE).

Founded in 1999, it a solid reputation around the Eastern Shore for leading safe and fun kayak tours.  SEE’s owner, Dave Burden, is also a kayak designer.  His line of recreational, sit-on-top, and touring kayaks - which are manufactured under his Coastal Kayaks banner - offer innovative and durable models that are big sellers across America and around the world (they’re also the exclusive kayak brand that’s used by SEE).

Our journey along Chincoteague’s shores was led by Amanda, an experienced, friendly, and very patient guide.  The fam and I had a bit of trouble finding our paddling rhythm at first, but Amanda was a huge help and, thanks to her easy-to-follow advice about body position, balance, and proper technique, we were stroking along nice n’ strong in no time.

Amanda really knew her stuff about Chincoteague, and shared facts about the ecosystems around the island and the wildlife that kayakers frequently encounter.  She told us that the oldest kayaker who had been on a SEE excursion was 92 years old, and that the SEE teaching approach makes it easy for anyone of any age to quickly and confidently master the basics (based on the guidance that she gave us, she was absolutely right).

Personally, I found kayaking to be blissfully zen and - if I chose to sprint - a great upper body workout.  The sound of my paddle slicing/pushing the water, the feel of the kayak gliding forward, and the bright, sunny beauty of Chincoteague on one side and Assateague Island on the other put me 100-percent in the moment with zero distractions.

Along with their superb two-hour jaunts, SEE also offers an in demand Chatham Vineyards kayak tour that includes a winery visit and tasting as well as a Kayak clamming tour, where paddlers visit a private clam bed and dig their own fresh clams to take home and eat.

I can’t imagine a kayaking journey that’s more skillfully managed than the one that we shared with Amanda and SEE. But don’t take my word on the quality of the trip - check out the stellar customer ratings and reviews: 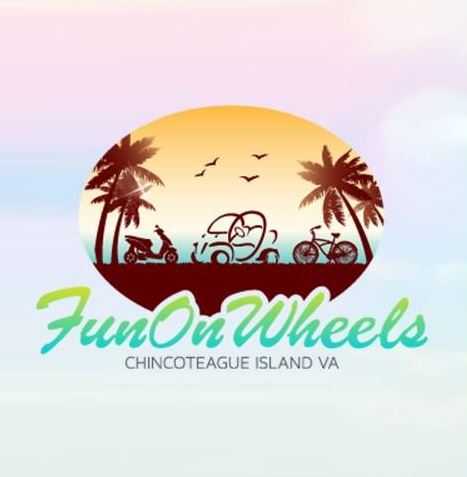 Biking with Fun on Wheels

There are lots of recreational vehicle rental shops on Chincoteague, but none have a better location than Fun on Wheels (FoW), which is...

FoW offers a huge selection of scooters, trikes, tandems, electric bikes, and electric buggies (they were the first company to make the buggies available on the island) - but my teen daughter Ariel and I kept it basic:  we were looking for a pair of bikes that we could use to take a closer look at areas of Chincoteague that were off the beaten path.

Diana Campbell, the co-owner of FoW, hooked us up with a pair of Jamis Earth Cruisers.  Her attentive team fitted us with helmets, bike baskets, and adjusted the bike’s height for Ariel.

The Cruisers appeared to be heavy, but they were surprisingly lightweight.  The bikes’ rides were so smooth, and they were so simple to pedal and maneuver, that with very little effort, we were really moving (Ariel was an especially brisk pedaler). 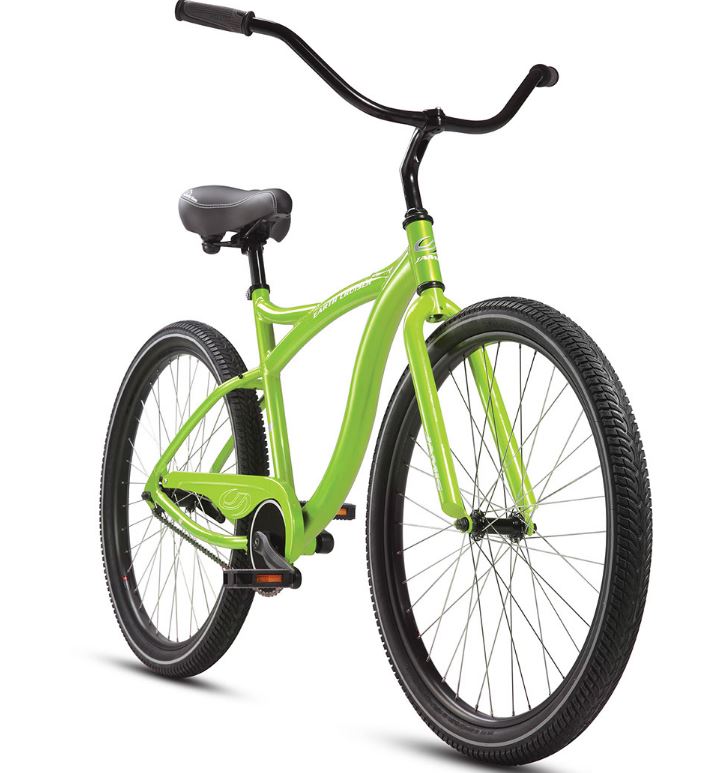 We followed a straight three mile route that ran east on Chicken City Road (which intersects with Maddox Blvd., right where FoW is located) into Ridge Road.  It’s a clean stretch that runs past the Chincoteague Pony Centre, some bait and seafood stores, and eventually through a residential area. The road was silent, straight, and level with barely any vehicular traffic.  Patches of sand lined sections of the shoulder, so we tried to avoid them (Ariel hit some on the way back and had a mini wipe out).  We passed a few graveyards, which contained headstones that were inscribed with last names that we had seen on street signs around the island (Daisey, Leonard, Jester) and decoy shops that operated out of tiny shacks.  The homes we saw were small and tidy - some with a charming 50’s-era feel.

On the return, we pedalled into the wind, but the bikes still gave us an easy ride.  Once we were back at FoW, the process of handing in our equipment was fast and convenient.

After examining customer reviews of Fun on Wheels, it turned out that our satisfying experience was shared by many other folks:

Their primo service, focus on safety, and massive, clean, and well-maintained inventory make Fun on Wheels “the” place to rent a two, three, or four wheeled recreational vehicle while vacationing on Chincoteague Island.

I’d heard about how great the boat tours around Chincoteague can be.  Assateague Explorer was mentioned as an option, but when I saw the unanimous rave customer reviews for family-owned Daisey’s Island Cruises, there was no other choice:

Check-in for our two-hour afternoon tour was quick and glitch-free (we had previously made reservations).  Once we were done, Bill Burke, our captain, led us to our boat, which was spotless and in great shape. 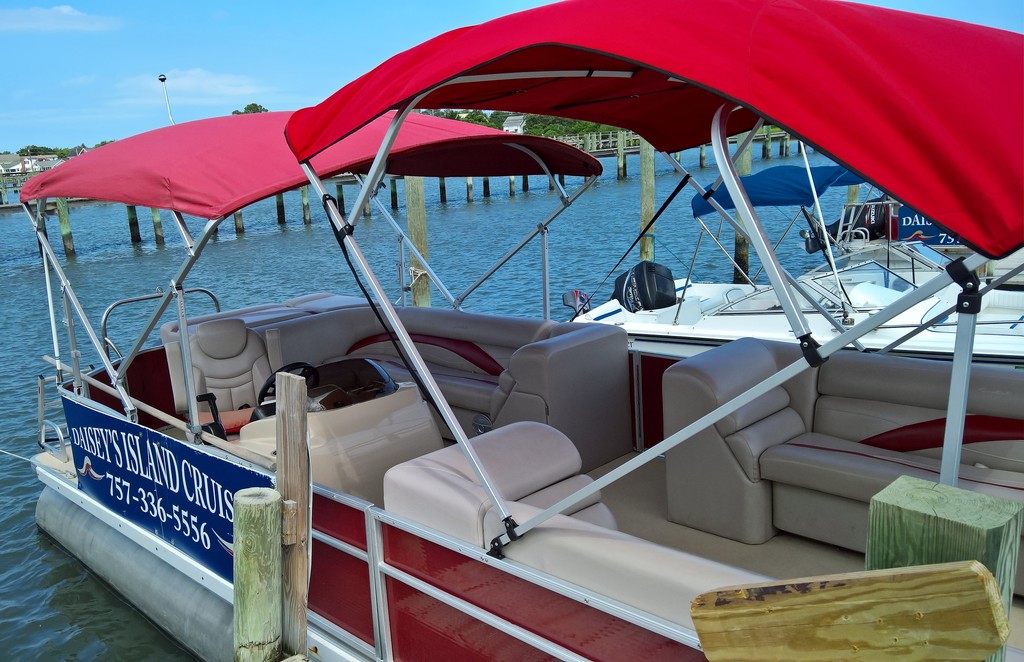 Bill is a lifelong resident of Chincoteague, and can trace his lineage back to the island’s original European settlers.  He shared yarns about Chincoteague’s history, weather, economy, scandals, folklore, and native wildlife.  He showed us - and gave us the back stories about - the island’s unique aquaculture, shore birds, oyster beds, historic homes and sites, duck blinds, the nearby NASA station, and land formations that surrounded the coastline.  He also told us about the famous ponies that inhabit the area, including stories about some of his favorites (yes, they have names) as well as the details about the island’s annual pony swim and parade, which attracts over 50,000 visitors from around the world and raises money for the Chincoteague Volunteer Fire Company.

Thanks to Bill’s vast knowledge, dry sense of humor, and friendly charm (not to mention his superb boating skills), our trip around Chincoteague was packed with fascinating sites, entertaining anecdotes, and some big laughs.  A vacation on the island would be incomplete without including one of Daisey’s Island Cruises on your to-do list.