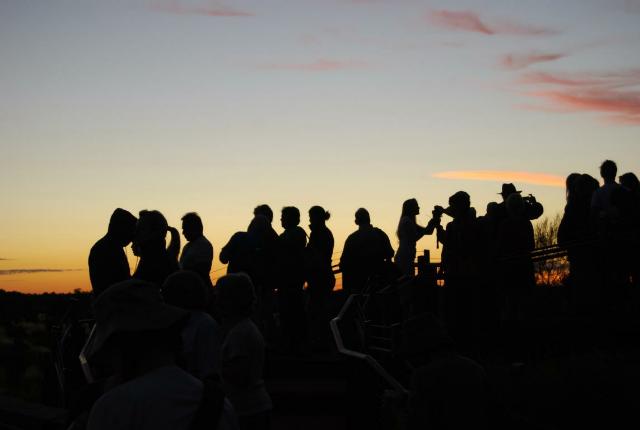 ‘Went to the centre of Australia. Saw a big rock. Had lasagne for dinner’

This morning, a brochure came through my letter box, promising an ‘Uluru Experience’. We could travel by four wheel drive, and camp under the stars … in fact, we could visit exactly the same places we visited six months ago. But, then, we travelled by coach, and stayed in a comfortable hotel, at two thirds of the price those operators were asking.

I don’t think it really matters how you get there, or where you stay. The important thing is seeing it … and no two viewings will be alike; I’d go again in a heartbeat if I had the opportunity.

Words are so inadequate to describe it; pictures are a little bit better; video an improvement. But, even these are insignificant compared to actually seeing the thing, preferably, in all its moods.

Uluru is one of those places to which no amount of pictures … or even film … can do full justice. It’s one of those places you must see in person. Neither is it the place to spend half an hour, take a couple of photographs then jump on the coach to the next attraction. Many walks around the base of the rock are possible; the local Anangu people don’t like you climbing it, for, to them, it’s a sacred place, and ask you not to. Just imagine, someone once said, if a group of Anangu decided to climb over the dome of St. Paul’s Cathedral.

There are also other places on the walks they ask you not to go, or, at least, refrain from taking photographs, for the same reason. All this land is owned by the Anangu people, and visitors are requested to stay on the marked paths.

There are, however, plenty of places you can go, and take as many photos as you wish. They won’t all be pictures of the rock from different angles, either. There’s rock carving, water holes and the fantastic shapes sculpted by Nature herself.

They pride themselves on the changing colours of the Rock as the sun sets, and we were taken to the Sunset Lookout, to witness this. Now, it may be thought that taking people to a popular viewpoint would result in everyone taking the same photographs, but it doesn’t. Depending on the time of day, and the season, every picture is unique and different, even if you take them from the same point, only ten minutes apart.

Unfortunately, the sun didn’t co-operate on this occasion, hiding behind the clouds, but they provided wine and nibbles, which were very nice, and most welcome.

But, the sunrise the following morning was a vast improvement; it was just a pity we had to get up so earlier to witness it. Earlier in the year, though, we’d have had to get up even earlier. We were by no means the only ones there. I was reminded of Stonehenge, and the crowds waiting for sunrise at the Solstice.

In fact, there was one guy there who took more pictures of people photographing the sunrise than he took of the sunrise itself! 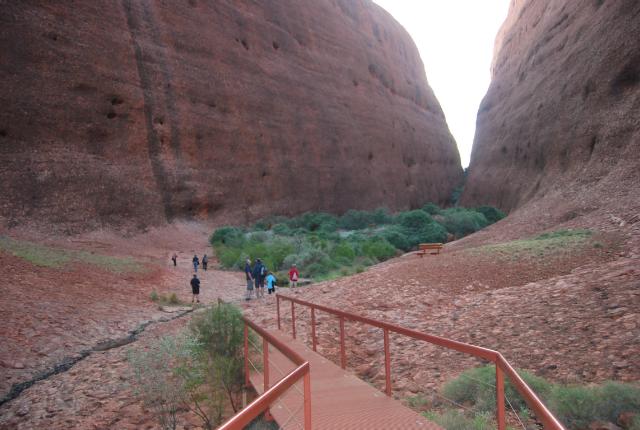 From Uluru, we drove the short distance to Kata-Tjuta (Many Heads), or the Olgas, to give them their English name. We walked along Walpa (Windy) Gorge, not to be confused with the nearby Valley of Winds. It’s well named, but at least, the wind kept the flies down.

They’re not really hills, rather huge rocks, but, unlike the far more popular Uluru, it’s many rocks, not just one huge one.

It’s another sacred site to the Anangu; a ‘men’s business’ site, from which women are normally prohibited. But, if you don’t belong to the tribe, visitors are welcome whatever their gender, although, once more, they’re requested to stay on the marked trails.

Here, too, there’s a ‘sunset viewing’ point. It was a long time until sunset, but it’s the only place for miles around where there are toilets. And, it’s a good place for photography at any time of day. Anyway, as we found out at King’s Canyon later in the day … it wasn’t all that spectacular a sunset anyway. In the morning, we made a pre-dawn start, to do the King’s Canyon Rim Walk. They say this must always be done in a clockwise direction. We have a similar superstition at home; a circular walk should always be tackled clockwise, for to walk ‘withershins’, or the ‘Devil’s Way is to invite misfortune. Maybe the Aborigines have a similar superstition? Or, could it be just advisable, to get the more strenuous stuff over first? That’s a climb up a series of step-like stones; the actual count varied, but averaged about 540.

At the top, we were rewarded with some stupendous views of the canyon ... a bit like some of the limestone features in Yorkshire, I thought, but red, and magnified a hundred-fold. We passed through a green area at the head of the gorge known as the Garden of Eden, and rested awhile by a waterhole. Then, we climbed once more up a wooden staircase to the other rim, which culminated in a dry waterfall called Kestrel Falls which, we were told, does flow occasionally. And, just as we completed the walk … it started raining.

It rained most of the way back to Alice Springs where I got awakened at 4.30 a.m. by a noisy rattle, and was going to complain about the noisy air conditioning when I checked out. But, it wasn’t the air conditioning; it was rain! It put down enough to form a few puddles in the sandy bed of the normally dry Todd River, but not enough to turn it into a fully-fledged river.

I wished we could return to Uluru ... I’d love to see the classic view with water running off it. Alas, we had a bus to catch, so we had to content ourselves with buying a postcard.