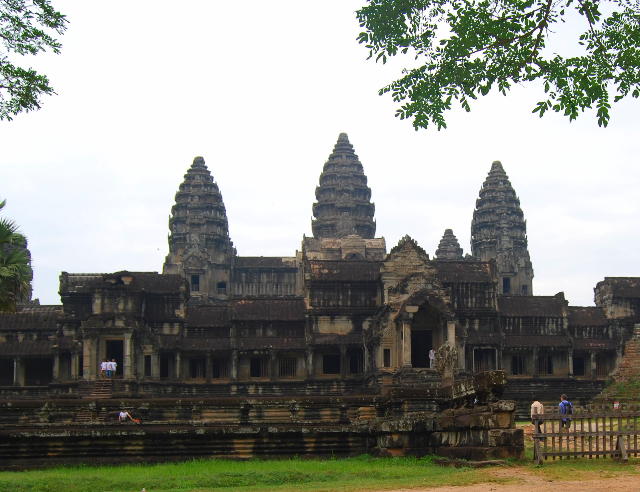 Cambodia claims to be the only country with a building on its flag. That building is, of course, the familiar profile of Angkor Wat. Claimed to be the largest religious structure of any kind in the world. it is, however, just part of a vast complex - indeed, the name means "temple city".

This complex was ordered built in the 12th century by King Suryavarman II of the Khmer Empire, as a temple to the Hindu god Vishnu. But within a generation, Buddhism had replaced Hinduism as the main religion, and statues of the Hindu gods adapted to those of the Buddha. Even today, although some of the temple is in ruins, the walls ring to the chant of what, we assumed, are Buddhist prayers. Orange-robed monks are frequently seen, sometimes giving blessings. I don’t normally photograph people at their devotions, but the guide said OK, and the monk smiled and nodded when he saw my camera, so I assume no exception was taken. And. I put a donation in his bowl, earning another smile. 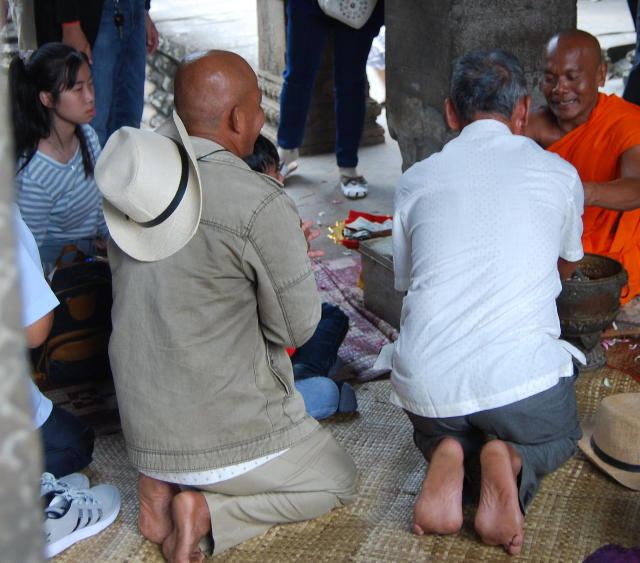 The instantly recognisable features of Angkor Wat are its five towers, which represent Mount Meru, the holy mountain of Hindus, said to be the abode of the gods. We saw, in a recent TV documentary, Sacred Places with Sue Perkins, the "gardeners" at Angkor Wat scale the perilous heights of the towers to painstakingly clear the plant life from the stonework to prevent it from suffering the same fate as other temples within the area. Since you can’t go around knocking pitons into the stonework of a "sacred place" - and a UNESCO World Heritage Site - however, they do it without any protection whatsoever!

Why, I asked, is Angkor Wat claimed as the largest religious structure in the world, when nearby Angkor Thom is much bigger? The guide explained: Angkor Wat is a temple; Angkor Thom was a city. The name means "great city"; Angkor Wat means "city temple".

Eighty years after Angkor Wat was completed, King Jayavarman VII ordered the building of the city, which was to become the capital of the Khmer Empire. We can get a pretty fair idea of what it looked like in its heyday, because in the 13th century a visiting Chinese diplomat named Cho Dou Guan (an approximation; I’ve been unable to find his name written down anywhere) wrote a graphic description, which enable the Smithsonian Institute to produce computer-generated images of what the city may have looked like. 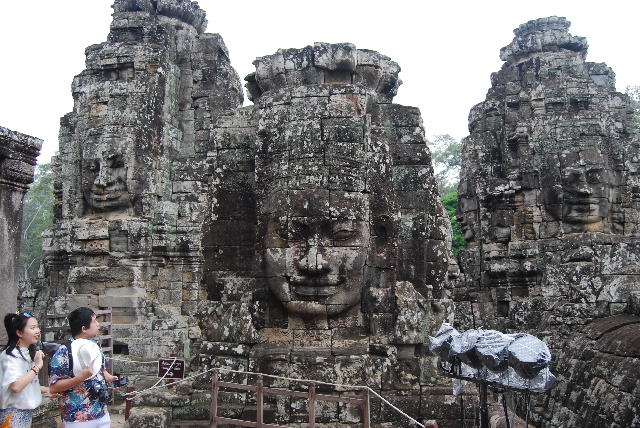 What remains is still impressive. The ruins cover 10 square kilometres and are surrounded by an eight-metre-high stone wall, and a defensive moat 100m wide. Later, after our visit, we took a short boat trip on the moat to see the sunset.

You enter the city across a bridge, with heads of the Buddha at intervals along the parapet. And here I made a mistake. I should have photographed a sign or something at the entrance. Without it, I have no real means of telling where the pictures of Angkor Wat end, and those of Angkor Thom begin. 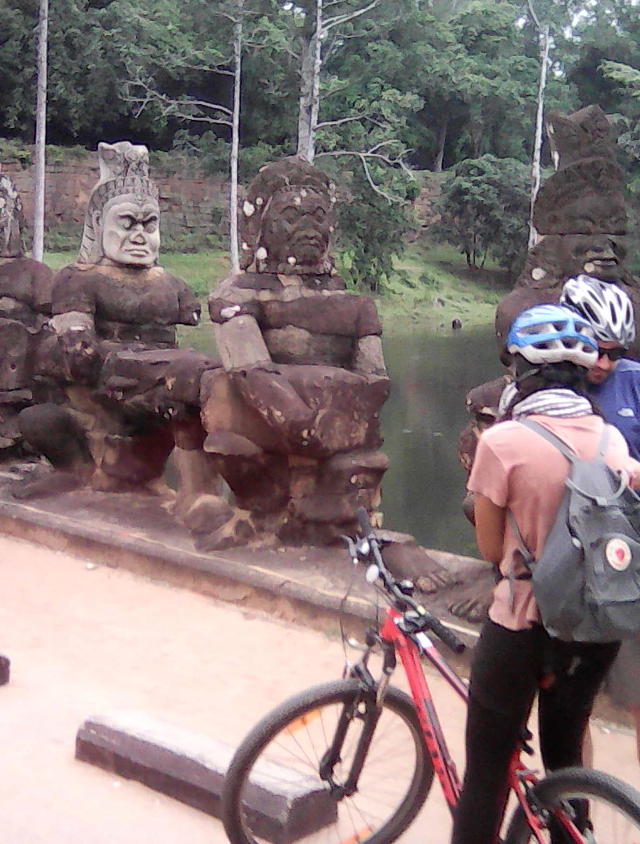 However, when you get to the ruins of the temple of Bayon, in the centre of the city, the many gigantic carved faces in the towers leave you in no doubt where you are.

The temple Ta Prohm lies just a short distance away from the other complexes within the site. It is - or rather, was - a Buddhist temple built by Jayavarman VII, the 12th-century builder of Angkor Thom, and dedicated to his mother. The temple was abandoned at the fall of the Khmer Empire in the 15th Century, and nature took over to reclaim the site, with the growth of trees taking over the structure. Under French colonial rule in the 19th century, efforts were made to preserve the site in the condition in which it was found.  Even today, a joint project by Cambodia and India seeks the same end; to preserve rather than restore. 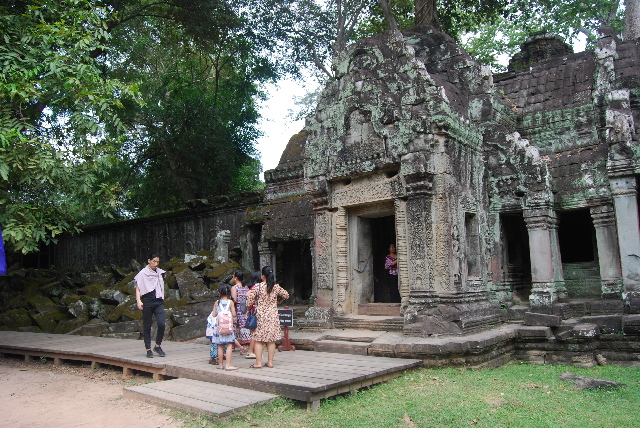 It’s a prime example of how nature can reclaim that which was lost. I have an idea that, if left to its own devices, the site would be completely taken over eventually. It doesn’t take much imagination to shut out the other visitors and pretend you’re the first person to lay eyes on it for centuries.

Just about every source I consulted says that one of the trees was made famous by its appearance in Lara Croft: Tomb Raider.  However, mentioning it has become somewhat of a cliché … so I won’t !!  (Oops.) 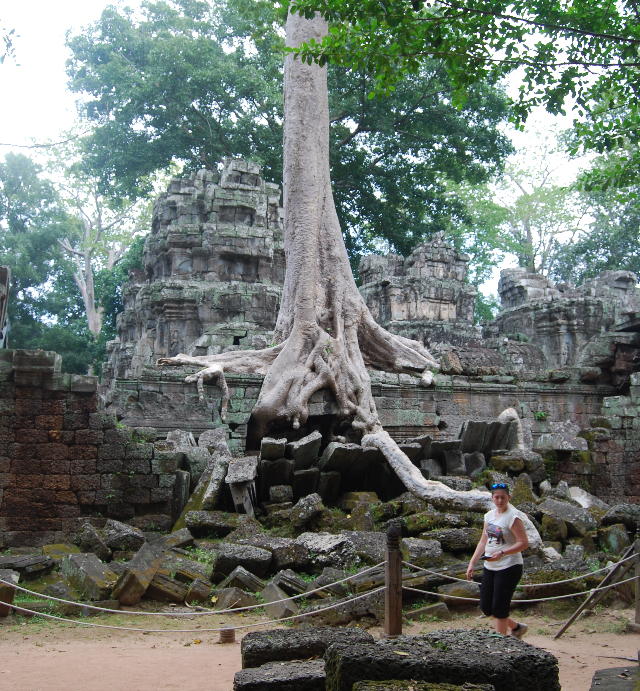 So that’s two sites down and one to go. Which is rather a pity, because a whole day could be - indeed, ought to be -  devoted to an exploration of each. But, as Cecil Rhodes once said: