Unfortunately, some important ancient monuments would be lost beneath the surface of the resulting lake … including the beautiful Temple of Isis on Philae Island, and the not-so-well regarded Temple of Débod nearby,

However, once a year, during the annual flood, the sluice gates of the Aswan Dam would be opened, and it was possible, for a few short weeks, to visit the temples.

In the late 1950s, a new dam was proposed, to complement the existing one. This would be the massive, Russian-built High Dam. It was quickly realised that its building would cause many more historic monuments, including the colossal rock temple of Abu Simbel, to be lost for ever below the surface of the new Lake Nasser.

The Director-General of UNESCO appealed for any help that might be forthcoming from other countries in moving these monuments to sites above the level to which the artificial lake would rise, and over 50 nations answered the call. The chosen monuments were carefully dismantled, and re-assembled piece by piece above the rising waters. Even the solid rock forming the mighty Temple of Rameses, at Abu Simbel was sawn into blocks, transported and re-assembled almost seamlessly around an artificially-built ‘mountain’

Some temples were a little less fortunate in having a new site found for them. But, the Egyptian authorities decided they should be taken to pieces anyway, and presented as gifts to the countries which had helped them most.

A total of ten temples, including the Philae Temple, situated between the two dams, were rescued and moved, And, a further ten were dismantled, and the stone blocks taken to Elephantine Island, near Aswan, below the dams, to await their new owners. 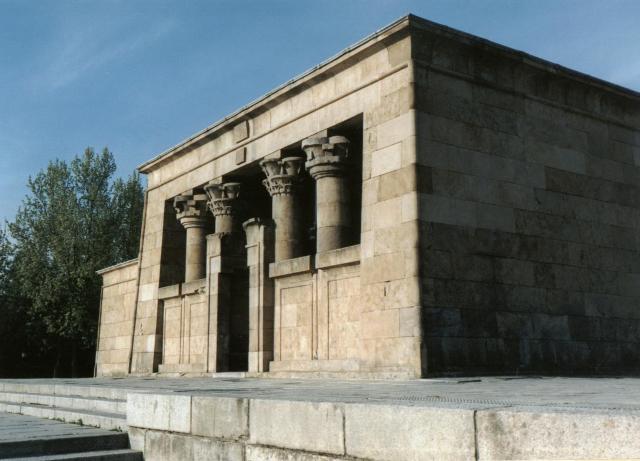 The Débod Temple was the first one to be rescued and the Egyptians decided to donate it to Spain. In 1969, a team of Spanish experts went to Elephantine Island in order to prepare the blocks and pack them securely for shipment to Spain.

The blocks were then sailed down the River Nile on rafts to the Egyptian port of Alexandria, where they were loaded on to a ship bound for the Spanish port of Valencia, arriving there on the 18th June 1972. They were then taken by road to Madrid, the country’s capital, where a team of builders and Egyptologists, or experts on Egyptian history, assembled them. The completed temple was opened to the public on 18th July 1972.

Most of the temples given to the other countries were re-assembled in museums, where only visitors to the museum could see them. But, the Débod Temple was rebuilt in a park, where anyone could see it, and walk around it at any time.

The chosen site was near the Royal Palace, in the Parque de la Montana; where once a former Army barracks stood, on top of a hill called Principe Pio Hill. Surrounding the building is a clear, moat-like lake and the whole thing stands inside a considerable garden, with palm trees making the temple seem at home, even against the backdrop of Madrid’s skyscrapers.

And, at night, the temple is usually floodlit, creating an unusual sight for passers-by, as well as those who come especially to see it.

To the west, the hilltop site gives a view of the vast Casa de Campo recreational area on the other side of the Manzanares River.

What we see here, though, is not the whole temple. The floors, the ‘pylons’ or walls, and the pier leading to the Nile were all badly deteriorated and abandoned on the original site. But, the two triumphal arches and the ‘inner sanctum’ where only the priests and the Pharaoh (king) were allowed to go, are still imposing. The inner sanctum is a rectangular two-storey building, which used to house the image of the god. It is fronted by four columns, carved in a simple impression of the palm trees and papyrus reeds that live on the banks of the Nile.

It is usually open through the day. Sometimes, they make a small charge to enter it; at other times, it is free of charge. They project a video on to one of the ancient walls, but the commentary is in Spanish only. And, there are wall carvings. They are not as good as some to be seen in Egypt and elsewhere, but it must be remembered that, for 60 years, the temple was under water for three-quarters of the year.

Upstairs, models show how the temple probably looked in its heyday, and how that stretch of the River Nile looked before the coming of the dams. And, a series of computers give a pictorial account and a commentary … in most languages … describing the history of the temple, how the temples were rescued from the rising waters and, most importantly, how the Temple of Débod came to be in Spain.

In the last 35 years, the Temple of Débod has become a symbol of Madrid, rather than Egypt. A ‘Google’ search for of information on its original location and movement revealed very little … apart from countless statements that, if I was ever in Madrid, I should be sure to visit it!