There’s a little village in the heart of the Pennsylvania Pocono Mountains that has seen more than its share of booms and busts during the course of its 200-year history. We recently visited the charming town for a second time. This time during its annual autumnal celebration.

When we called the innkeeper of the Inn at Jim Thorpe, Dave Drury, and told him we planned to do a sequel to our story about the town of Jim Thorpe and needed a one-night room on a Friday night in October he was silent.

We hadn’t thought about the fact that it was leaf peeper time in the Poconos. The weather was forecasted to be splendid and we were asking for space on a Friday night when thousands of visitors descend on the borough to enjoy the fun and festivities of the Fall Foliage Festival. Ergo, SOLD OUT – everywhere.

We were resigned to forgo the pleasure of sharing new images and writing more about how centuries-old Mauch Chunk prospered by providing anthracite coal for the industrial revolution and subsequently suffered when oil replaced coal as the chosen fuel of industry.

However, like the fortunes of the town, our luck took a turn for the better. Dave Drury emailed us that one room had come available at his building at 44 West Broadway, just a few blocks from his famous main inn. He said it was a very small room, but we gratefully assured him it would do fine. We actually found both the Victorian building and the room absolutely delightful.  Thank you, David! On with the story. 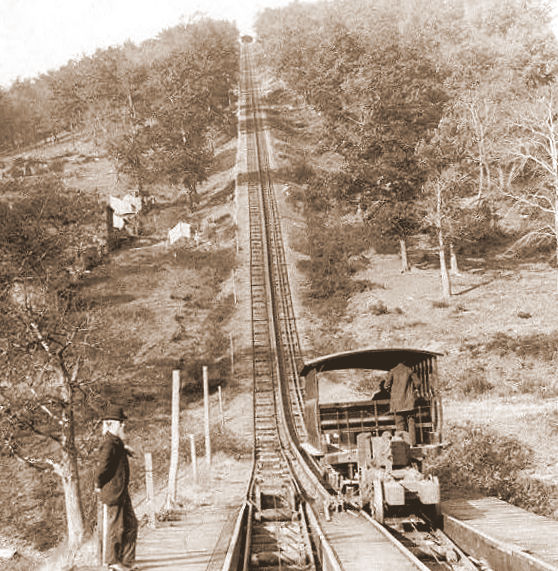 Mauch (pronounced “mock”) Chunk means “Sleeping Bear” in local Native American parlance and is named so because the town rests alongside Bear Mountain and next to the Lehigh River. The resultant topographical gorge makes for outstanding scenery and abundant outdoor activities.

In the early days of settlement, Mauch Chunk was a prosperous town indeed. In fact, during the good times of the 19th century, when there were only 26 millionaires in the entire United States, an astonishing 19 of them had homes in Mauch Chunk, Pennsylvania.

Even as the town lumbered in the sooty coal and railroad businesses, early thrill-seeking tourists started to come to Mauch Chunk to ride the gravity railroad named the “Switchback.” The railroad ran coal cars from the mines at the top of Summit Hill to waiting coal barges in the Lehigh River far below. Converted coal cars provided an early roller coaster experience for adventurous 19th-century passengers – for a price.

Unfortunately, the Switchback ended during one of the town’s economic struggles. Today, the roadway remains a popular hiking and biking venue for the hale and hearty.

Notwithstanding earlier booms and busts, the Great Depression took the heaviest toll on Mauch Chunk and many of the town’s old buildings fell into disrepair. It is the world’s good fortune that during these struggling times the town was too poor to demolish dilapidated structures. Today some of those buildings make up Jim Thorpe’s quaint restaurants, shops, and lodgings.

An Inspirational Story of Survival and Revival

Jim Thorpe (1887-1953) was of Sac and Fox tribal extraction, an extraordinary athlete in fields including football, baseball, and pentathlon/decathlon (for which he won Olympic gold medals). You can read about his many achievements in our original story, A Town and Hotel Remember the Greatest Athlete of the 20th Century.

After Thorpe's death, two small towns in Pennsylvania – located 100 miles from his old Carlyle school – wanted to capitalize on his fame for tourism and commercial purposes. They made an agreement with his widow and in 1954, the neighboring boroughs of Mauch Chunk and East Mauch Chunk merged to become Jim Thorpe.

The new municipality entombed Thorpe’s remains, and erected a stately monument with two statues in his memory. The monument sits on soils from his native Oklahoma, and from the Stockholm Olympic Stadium where he won his gold medals.

Not really. The fame of the greatest athlete of the 20th Ccentury faded quickly after his death, and by the 1960s and 1970s many in the new generation had never heard of Jim Thorpe.

However, more importantly, the name change had excited and motivated the leaders and people of the borough, and the proud little town became noticed for its architectural revival, restaurants, trendy shops, abundant scenery, history, planned events, and excellent outdoor activities. By the 1980s, Jim Thorpe was on a tourism roll and has never looked back. 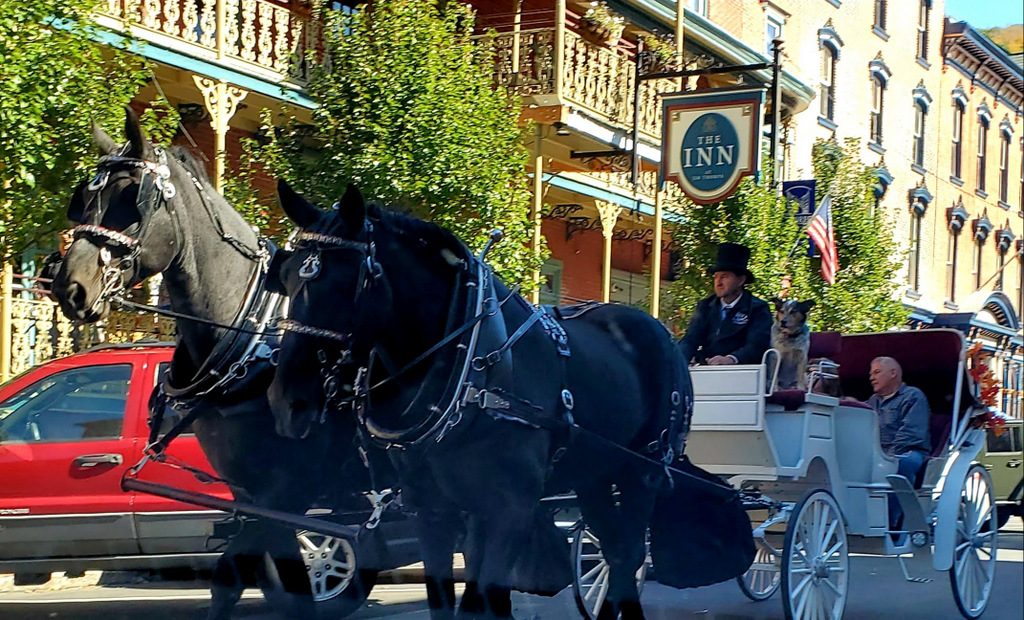 A note of caution: If you plan to spend any part of a weekend in Jim Thorpe, book well in advance to avoid disappointment. Do as we say, not as we do!