The Rio Secreto (riosecreto.com) was a highly recommended tour company that specializes in a naturalist's approach to exploring these sacred caves as well as their religious significance, and interlaced with the excitement and adventure of swimming in an underground river and hiking through caves and caverns that are millions of years old.

Rio Secreto…. The Underground River in a Cave

We had an open, unplanned day and pondered a zip-line over the jungle canopy, an ATV driving experience through the jungle or an eco-tour in a cave.  Being out voted 2 to 1 we went with the “less strenuous” option and booked the cave excursion.

Arriving at the Base Camp

We arrived at the reception office located on the edge of the jungle reserve and boarded a van for a bumpy twenty minute ride further into the jungle to the base camp center where an orientation lecture took place.

We were briefed on the pristine nature of the environment we were about to enter and the importance that these caves and their freshwater played on the survival of the Maya people.

We immediately got the impression that we were about to embark on an interesting adventure with the potential of being something extraordinary.

After the orientation we reluctantly placed all of our valuables (watches, cameras, jewelry, wallets and IDs) into the lockers that are provided.  Next we all had a “cleansing” shower in our bathing suits (thank goodness) to rid us of all sprays, perfumes, and oils... that pristine thing again.

Time to dress for the occasion with a form flattering (maybe or maybe not) short sleeves, short legs wetsuit, booties, life jacket and a hard hat with a miner's light… we are all getting a little more anxious but before you can chicken-out we are off to the actual cave’s entrance.

On the way we stopped for a Mayan blessing ceremony… all smoke no mirrors. 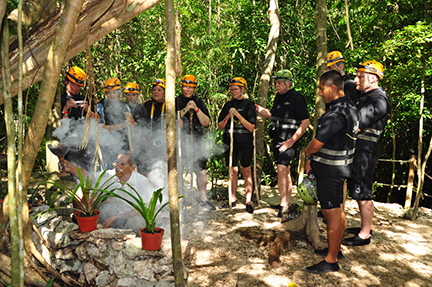 Into the Cave and the Sacred River Chambers

Along the way our guide, Pablo, explained the objective of our journey… there are 13 “Good States” and 9 “Bad” and we were about to go through a “Re-Birth” underground to come up out of the cave into the Good State.  Is anybody following this?

Down the spiral staircase we go into the underworld of darkness with our hard hat lights on and our enthusiastic guide rattling on and on about the spiritual experiences we were going through.

We arrived at a flat spot and discussed the next phase… Can everybody swim?  Can everybody fit through a four square foot hole?  Is anyone claustrophobic?

OK…. Point of no return and you start to question exactly what the heck are you doing in a cave, in a jungle, in Mexico, with a stranger telling you how wonderful it will be!  This part was not in the promotional brochure!

The three of us in our group just looked at each other and came to an agreement that the trek back up was harder than going forward… let’s go for it!

We were immediately rewarded for that decision when we saw the absolutely amazing mineral formations, chambers of crystals, stalactites and stalagmites, all of which took millions of years to create, and the view was enhanced by the crystal clear water of the Rio Secreto itself. 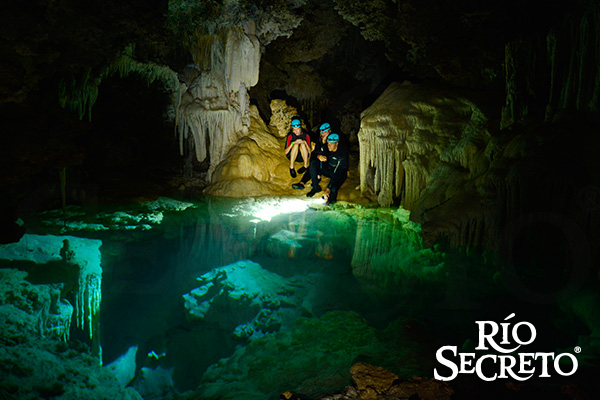 It was onward and downward and the water was getting deeper… ankle to knee to chest to then floating in your life jacket in an underground river. 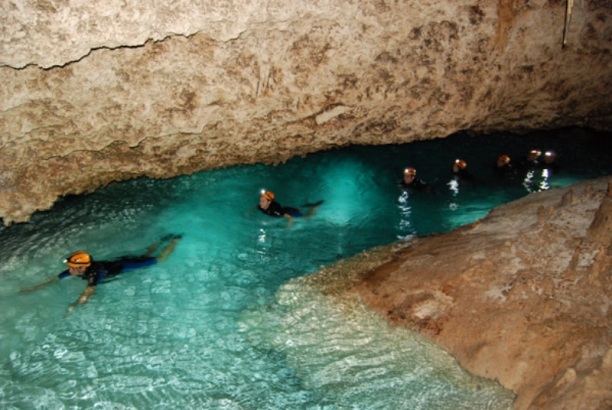 During the one and a half hour tour we wound up squeezing through a four square foot archway, walking and climbing through a series of caverns and swimming through clear blue pools (cenotes) propelled by the river itself.

The group glided along with our guides and a photographer until we settled in a shallow lagoon area and sat on the sandy edge… then it was “lights out” for about 5 minutes to “feel the spirit and tranquility of this sanctuary”.

Pitch black, with a the faint sound of an occasional solitary water droplet off in the distance the senses of sight, smell, sound, and touch were all suspended in the darkness.

You really do get the spiritual effects of the moment.

We were instructed to turn our lights back on and look up at the ceiling.  We were sitting in what appeared to be a Cathedral of natural formations. 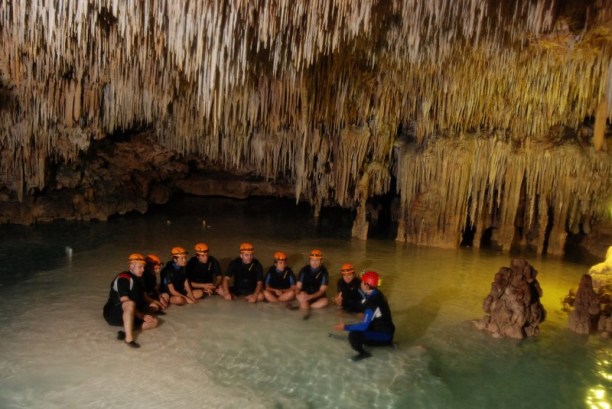 Sitting below a natural Cathedral Ceiling Millions of Years old

Exiting the Underground and Our Rebirth

The group moved in muted silence… climbing a gentle slope out of the underworld having our senses return, however slowly, as we were “reborn” into the real world… the smell of the damp and musty earth… the feeling of the humidity on our skin… the brightness of the colors and sunshine, and finally the sounds of the jungle.

The feeling of coming out of an absolutely foreign environment and into our “normal” world… was intense. 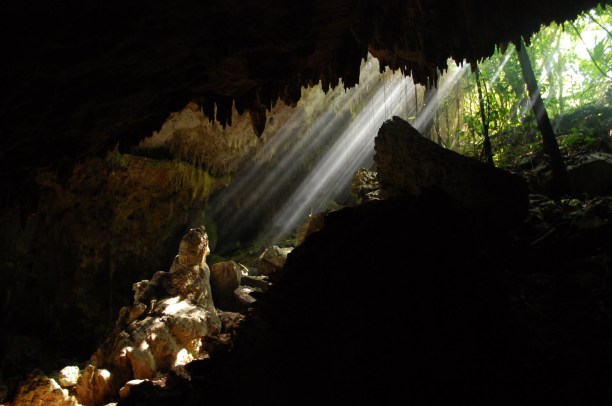 Everyone was silent at first and then we all became very animated and excited about the visit to the Rio Secreto.

A Poem by One of our Fellow Travelers Kathy Baus

The “least strenuous” tour option proved to be an absolutely amazing adventure for the spirit and the visual imagery of the mind.

WOW sums up our feelings!

After all, what is the hurry… be inspired…

Please note that we were not allowed to use our cameras.

Images courtesy of the following: