A Hurtigruten Norway Fjords Cruise, Part 1: What It’s Like Apologies to my friends and colleagues in the cruise industry or who are cruise fans, but I’m just not that into cruising –  I’d much rather spend my time and money actually experiencing destinations rather than spending most of my trip on a ship (no matter how tricked out), with just occasional, usually frustratingly fleeting tastes of ports of call. There are, however, some cases where a cruise is clearly the best way to experience the most in the most efficient amount of time (unless you have the luxury of spending months on the road – which, less face it, very few of us have, including yours truly). That applies to places like the Greek islands, some might say Alaska, and most definitely the long, lovely coast of Norway, which I experienced for the first time earlier this month at the invitation of Hurtigruten itself.

Cruise Ships Unlike Any Other

Founded a few years ago (actually, 1893), Hurtigruten is an outfit fairly unique in the world, not just a national icon but practically a public utility (and about that name - I discovered it means “the fast route” in Norwegian, though previously it had always sounded to me like some whimsical Muppet-Swedish-chef-type term meaning, I dunno, “hurdygurdy music played in grottoes”). Operating a 13-ship fleet divided into four classes, the company’s bread and butter is carrying both passengers (from 451 to 1,000 apiece) and cargo up and down Norway’s rugged North Atlantic coast, rarely if ever losing sight of land (several other itineraries, though, strike out for Greenland and even as far afield as Antarctica). As cruise ships go, these are sturdy, fairly modern, and comfortable enough, but the amenities tend to be, um. let’s say, on the basic side. Ain't no rock-climbing walls, casinos, theaters, Flo-Riders, flatscreens in cabins, and so forth – on mine, just a restaurant (above), a lounge, a little 24/7 pay cafeteria housing pretty much the ship’s only TV, a workout room, a laundry room, a sauna, and WiFi on the two decks with most of the public areas (actually, I should correct myself slightly – some of the newer ships do throw in outdoor Jacuzzis and suites with TV’s, picture windows, and mini-bars). 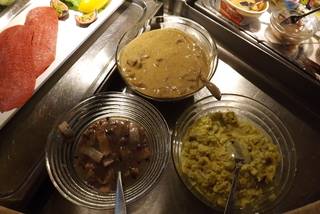 Grubwise, don’t expect acres of goodies and midnight buffets – your three squares are served for a couple of hours each, and you can have anything you want as long as it’s herring (left). Oh, I kid - apart from the admittedly prominent herring there’s a limited but more than decent selection of cold cuts, breads, salads, and cooked items, sometimes served as sit-down meals, more often laid out buffet-style, I've always said that any outfit that serves me smoked salmon is aces in my book, and Hurti's definitely a smoked salmon star; I indulged at virtually every meal - to the point where I actually feel I'm good through at least 2013. Our last night onboard, BTW, we were treated to fairly flavorful sliced reindeer in mushroom cream sauce (right) - tastewise, think venison (some of the other unusual offerings, meanwhile, didn't go over quite as well; not only is dogfish one ugly mofo, but I can't say I'm a fan of its flavor). Evening entertainment is very much limited to the basics, too – in my case, a somewhat wan and usually sparsely attended lounge singer/pianist who managed to turn John Lennon’s “Imagine” into a dirge.

All in all, from my observation, I did find myself fairly impressed, because when it comes down to it, the Hurtigruten ships feel like something of a hybrid between cruise ships, expedition cruises, freighters, and ferries. When I compared them to a public utility above, by that I meant that they play an important role in moving goods, vehicles, and people between 34 of Norway’s sometimes remote coastal cities, towns, and hamlets along a 1,500-mile (2,414-km)  – places which even in 2012 can take days to reach by small local roads from Oslo and Bergen. More About My Own Ship Experience

The ship on which I sailed, the MS Nordlys (Northern Lights, below), is a seven-deck bit of business 400 feet (122 m) long and 69 (19m) wide, built in 1994 and carrying up to 622 passengers and 45 cars (there were just a few hundred people on our trip, fluactuating as they got on and off at different ports along the way, but apparently numbers were down because of the Olympics going on at the time). Hurtigruten counts this as one of its “contemporary” ships, and décor is far from flashy but pleasant enough, including some actually pretty cool - and yes, contemporary - paintings depicting sights along the way as well as the northern lights for which the ship’s named.  We pulled out of the beautiful, historic city of Bergen (read my post here) around 6pm on a Sunday, and had an evening to get our sea legs before the good stuff started the next morning. That night somewhere around 1am, we started rolling and yawing a bit for an hour as we hit a touch of heavy currents – not enough to spill water or make you lose your balance, but still a bit of a novelty to those of us more used to the imperturbable rides through placid waters afforded by most of today’s seagoing cities (the rest of the cruise, in any case, was impeccable smooth). I should add, by the way, that despite taking passengers to some pretty remote and sometimes rugged places, unless you literally need and oxygen tent, everything is set up for all ages and levels of fitness, including excursions. On the Nordlys, I found the passengers skewed a bit older, but I saw every age, size, and shape of human bean imaginable, from babies in strollers to seniors inching along with walkers. In fact, it got me to thinking about enticing my parents, both in their 80s, for a cruise next year (I'll certainly keep you posted!).

Overall, I have to say the onboard experience was pretty good, but I did have a small handful of beefs. One that stands out involves hygiene. Now, I should say that I consider myself a pretty clean guy - I shower once a day, sometimes more, and wash hands several times daily. but here I was made to feel like Pigpen. While I realize that the Norwalk virus is a big deal in the cruise world, here they've turned it into a nearly fascistic fetish; every time you re-enter the ship after a port call or even go into the restaurant, they make you squirt some Purell (or equivalent) onto your hands - and will even argue with you if by chance they haven't actually witnessed you doing it. Nummer to, yes, I'm all too well aware that Norway is a pricey country these days, but this was ridiculous: Beyond the basic meal plan, it’s not all-inclusive, and Odin forbid you miss a meal through oversleeping or whatever, because the 24/7 pay cafeteria can be blindingly expensive; at one point I forked over $20 for a pair of sodas and a ham-and-cheese cheese sandwich. Yet they’ll scold you if you try to take so much as a couple of slices of bread away from lunch. A little cheesy, actually. And speaking of spending money, if you’re wondering what all this costs – and despite the lack of onboard bells and whistles, being a specialty product, it ain’t particularly cheap. Norway itineraries run year-round and range from US$1,286 to $17,133* per person – yes, I know that’s a helluva spread, but it all depends on length (six to 12 days), time of year, double or single occupancy, and early vs. regular booking; specialty cruises include those focusing on astronomy and winter’s spectacular northern lights. (Its 9-to-15-day Greenland itineraries, by the way, run for US$5,917 to $26,153** while Antarctica will set you back a cool US$6,302 to $33,875***  for 10 to 19 days; a handful of other Europe/North Africa cruises is also available, along with a transatlantic crossing.) Finally, apart from the scenery, shore excursions (right, getting ready to depart on one) are of course a big part of the experience, so in the case of Norway you’ll want to budget a bunch of the 45 or so excursions (they vary depending on whether you’re traveling northbound or southbound, and time of year); these cost $32-$270.****

Intrigued? Please stay tuned for Part 2: Geiranger Fjord and the Troll Highway (oh, yes, my pretties, there will be trolls). Meanwhile, to read about my experience of Bergen before boarding the ship, click here. For more details on Hurtigruten, click here to log on to its European web site and here for its U.S. site.