Your complete discovery to Angkor Wat and Angkor Complex can’t exactly miss out either sunrise at itself Angkor Wat or sunset at Phnom Bakheng. Remember that both sites are always crowded. 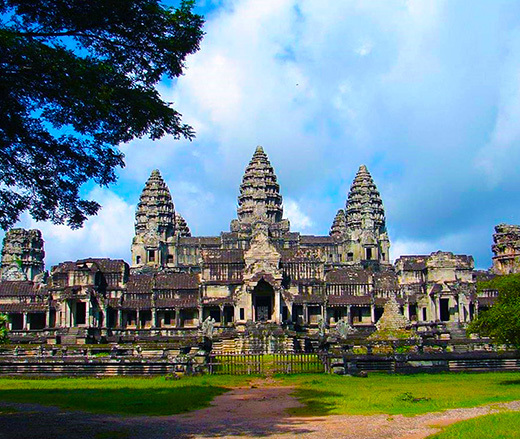 Normally, you have to leave at the dawn (5.00am) straight to Angkor Wat temple or leave at 4.30am if you haven’t purchased Angkor ticket. Entering from the west Gopura of Angkor direct to the lily pond where you await to see the spectacular sunrise over Angkor Wat towers as well as the reflection from the lily pond. Once the sunrise ended, we advise you return to have breakfast at your hotel then leave again at 9.00am for the day exploration.

Angkor Thom – The last capital city of Khmer Empire, was built during the reign of Jayavarman VII in the late 12th century. Within Angkor Thom compound, it comprises some of interesting Angkorian temples and especially the main Bayon temple.

Start your exploration at the South Gate of Angkor Thom adorning with God & Demon balustrades which has a story about “Churning of The Ocean of Milk” whose sculptures are also found at the west gallery of Angkor Wat. Explore Bayon temple and other small temples including Baphuon, Phimeanakas, Terrace of Elephant, Terrace of The Leper King and take some photos of Prasat Suor Prat. Resume visit Ta Prohm - the jungle temple with the stunning giant tree roots, it’s also where Lara Croft Tomb Raider was filmed.

Afternoon, continue to witness the marvelous Angkor Wat - the world’s heritage listed by UNESCO in 1992 and the largest unrivaled monument in the world. Built by Suryavarman II in 12th Century, Angkor Wat is considered as one of the top destinations in Asia and is a must-see in your lifetime. Learning from your tour guide the amazing history, its ancestral incredible, architectural masterpieces and the finest carvings dates back to the Khmer Empire when it dominated the largest parts of Southeast Asia.

Phnom Bakheng is a temple mountain was founded by King Yasovarman at the end of 9th century in the purpose of dedicating to Shiva. Bakheng hill is considered as the best place to watch the beautiful twilight in the evening and it’s well appropriate for those who love taking photos of the sunset. However, Phnom Bakheng is only allowed 300 visitors maximum, it’s always touristy, there must be a queue and you have to arrive at the place before the allowance is out.

The most impressive classical style of Angkor temples, this Angkorian state temple was built in 12 century in the center of Angkor Thom, the arising 54 towers feature endless smiling stone faces and along with 2 large panels depicting mythological, historical and daily life scenes. At the temple, you will find it very interesting and there are a lot of chances to take beautiful photos.

One of amazing Angkorian temples in the archaeological park away from Angkor Thom about 1km. Ta Prohm was built in the late 12th century in the reign of Jayavarman VII. The entire temple is being invaded by the jungle and covered by the intertwined tree roots which makes the temple looks more spectacular, photogenic as well as one of Angkor's most popular temples.

When is the best time to visit Ta Prohm?

While the crowds are gathering at Angkor Wat for sunrise, the temple should be less touristy around 7.00am but can’t guarantee because more and more tourists have had the same suggestion during this time. The photogenic and atmospheric moment will definitely cater your passion if you really love photographing.

The incredible and the most extensive monument in the world, was built in 12th century by King Suryavarman II, dedicated to the Hindu God Vishnu and later turned into a Buddhist temple. Surrounded by the moat and jungle, Angkor Wat is designed to represent Mount Meru - home of the devas in Hindu Mythology and it’s admired by large significant bas-reliefs depicting historical, mythology scenes, and also adorned by hundreds of Apsara sculptures including the one’s smile with teeth.

Nowadays, the marvelous Angkor Wat is widely famed for her unrivaled masterpieces, unique architectures and incredible history that makes Cambodia one of the best destinations in Southeast Asia. Listed as one of UNESCO world heritage sites in 1992, Angkor Wat annually attracts more than 2 millions of tourists from over the world to come to visit her majestic complex and Angkor Wat temple is the must-see in your travel bucket when exploring Asia.

When is the best time to visit Angkor Wat and how long?

Angkor Wat is generally full of the crowds from the sunrise time to the evening but it seems a bit less touristy during the heat and low season (June to September) is an ideal to escape from the crowds. Spending 2 hours is the most basic to explore Angkor Wat and 1.3o hours when the top tower is not allowed to enter on holy days or you may spend more than 2 hours depends on your interest.