The backwaters of Kerala never have to be introduced to the tourists visiting them from all across the globe. Of late, they had been even acclaimed internationally in various spheres. Moreover, these serene water bodies spreading over a vast expanse of the area in every aspect deserves to be listed and recognized globally. One of the most exciting things that make them a standout is the fully equipped large houseboats that sail across these placid lakes. These adorable houseboats are built on the traditional 'Kettuvallam’ with natural coir, jute, bamboo and even dried palm leaves. Cruising by these uniquely constructed houseboats in the backwaters could offer you a different experience. Henceforth, you also could hop onto them and rejoice your moments. Below given are the never-to-miss houseboat cruising experiences in Kerala.

Admiring the aesthetic beauty of backwaters of Kerala

As mentioned earlier, the views that you could behold while cruising on these houseboats could startle you, as they are truly mesmerising and capture the unique beauty of Kerala. So you too could book any of those similar packages and be in awe of these backwaters. Once entering into the open lake, you will be seeing nothing beyond some distances, just the waters and the blue sky. Meanwhile, when the houseboat on which you are sailing is approaching the banks of these lakes, you could spot the village dweller living their normal lives in this tour. Also, the land area that you spot firstly would be lined by numerous coconut palms that would be slanting towards the water bodies. From the vast area of the backwaters to which they are spread, one could imagine the different varieties of fish inhabiting in its waters. Most of the kitchens of these houseboats cook these traditional Kerala recipes from the fishes caught from the lake. They not only comprise of the typical spicy fish gravies but also range from Crab roast to scrumptious dishes made with freshwater shrimps. However, the all-time favourite picks of the tourists visiting the backwaters of Alleppey are the palatable ‘Karimeen Pollichathu’, i.e. the Pearlspot marinated with spicy flavours, which is covered in banana leaves and cooked therein. Even their exclusive aroma is going to enthral you before you savour them.

Angling right from the middle of the backwaters Many of the houseboats that you get into voyage in the backwaters halt in the middle out of nowhere whenever you demand so. At such an instance, you could try your hand in the skilful activity of angling. With your fish hook in the hand, you could even compete with anyone in the group, on who will catch that very first fish from the immense water body. Moreover, there are certain areas in the lake where the possibility of getting that trawl would be more, like where it merges with the sea. You may ask the one who steers the houseboat to take you into that particular place and engage yourself in this fun activity of angling.

Tranquillity during the night cruises Everything around you will be attaining yet another version once the sun sets in the areas of around these backwaters of Kerala. Therefore, spending the later hours of the day one such houseboat and plying around the entire area is going to offer you yet another overwhelming experience. In fact, all these alluring sights could even be perfect to be included in any honeymoon packages based in Allepey. However, they are very much different from the private yachts plying in the ocean waters of Chennai. Also, the ambience outside these charming boats in Kerala would all be very calm and composed, as you are not to come across any busy fisherman, or many other boats and traditional canoes sailing in the waters barely creating any noises during the daytime. Here you are to experience that absolute tranquillity. It would be rare for people to dislike the act of choosing the window seat while travelling and watching the views outside. That does apply while being in the houseboats that sail across the vast expanse of the lakes. In contrast to that, if followed those narrow canal paths of Alleppey, foreign travellers would be startled to glance at small homes built on either side of the land, where the villagers would be busy indulging in their daily chores. Nonetheless, a larger majority of the view would constitute of the lush greenery of the state. Also, that adorable combination of the green serene land and brimming lake waters is going to refresh you to a greater extent. 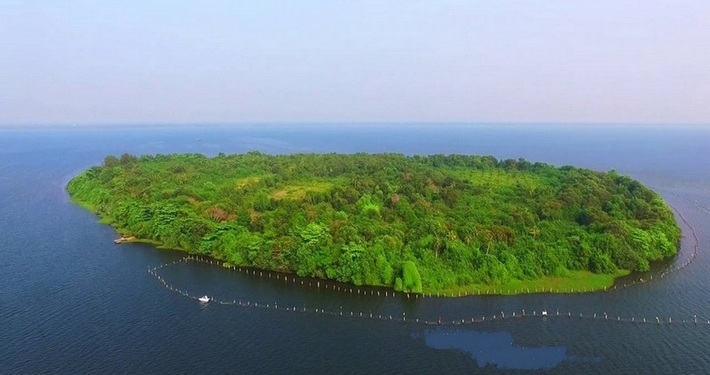 This particular backwater of Alleppey is known for its numerous small islets. One of the prominent such islands right in the middle of the lake is the Pathiramanal, where you could spot different diverse varieties of migratory birds. Besides that, at this 10 acres of unspoiled land lives some endangered species of flora and fauna. It would be rather thrilling to stroll around these dense bushes grown on the borders of the Island even if there is a stone pathway at some portions. Further, you could sail more and also explore other untouched islets spread across the backwaters. More astonishingly, at someplace the lake would be so shallow that you could get down in these knee depth waters and have fun to its fullest. Never forget to click that exceptional snap from those unnatural spaces once halting your houseboat at the middle of the vast lake.

Such provisions of cruising across in these houseboats are made available in almost all the backwaters of Kerala such as Kumarakom, Kollam, Trivandrum, Kochi, Chettuva, and Valiyaparamba. Yet the most popular of this could be the splendid houseboat cruising alongside the vast and beautiful backwaters of Allepey.  Dream Holidays offers you that exclusive opportunity to experience all of these, by including them in their exciting Kerala houseboat packages. Apart from that, they also make it possible to provide you with mouth-watery delicacies cooked with traditional cuisines other than comprising various other fascinating activities. Most notably, you could avail their services at incredible rates by either booking them online from their official website or just by merely getting in touch with them on their WhatsApp number.