A relatively small state running along the southwestern Arabian Sea coast of India, Kerala bills itself as "God's own country" in part because in feel it's a languid, tropical world away from much of the rest of the country, combining sea, mountains, and backcountry waterways in a delightful package. The best way to tour it is by starting your trip from the north in its second largest city Kochi, then making your way through Munnar, Allepey, Kovallam, Kanyakumari, and Trivandrum; doing this trajectory from south to north works just fine, as well. Either way, here are the top five destinations you shouldn't miss.

Also known as Ernakulum (and in colonial times, Cochin), this city of around 677,000 (metro area 2.1 million) is dubbed "the Queen of the Arabian Sea" and offers a kaleidoscope of rich history, including Portuguese colonial influences from the more than 160 years it was ruled by Portugal, as well as a spectacular coastline and dynamic culture fed by ethnicities from all over India. The best way to tour Kochi is by boat, which will take you around all the major attractions including Pardesi Synagogue, Mattancherry Place, St. Francis Church, Princess Street, Lulu Mall (India's largest), and Dal Roti, one of the best restaurants in Kochi). 
Nestled in the tall, verdant Anamalai Hills, this sureally-beautiful-as-a-painting hill station lies amid lush tea plantations, air which perfume the air with a delightful, light but distinct aroma, as well as lakes and ponds cleaner and bluer than you’ve ever seen. When in Munnar make sure to visit the Tata Tea Museum, Pothamedu viewpoint, Attukal Waterfalls, Kundala Lake, and the Matupatty Dam.

This small town settled around the famous backwaters in Kerala offers nature at its best. Trails of lush green coconut trees line the famous Kerala backwaters - lagoons, lakes, and natural canals, on which "kettuvallams" (quaint, thatched-roof houseboats) are the quintessential form of Kerala accommodation. Here you should also not miss  Krishnapuram Place, Marari Beach, and the Karumadikuttan, an ancient Buddha statue missing its left side. 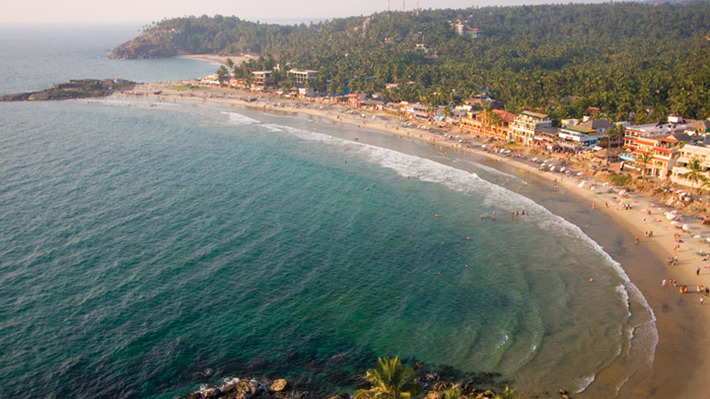 If destressing your body, mind, and soul is important to you, then this laid-back coastal area centered around a small former fishing village and coconut-palm groves is just the place.  Get an Ayurvedic spa treatment, chill on superb Havaa, Lighthouse and Samudra beaches, and check out local sites such as the 8th-century rock-cut temple in Vizhinjam village a bit to the south. 
A 30- to 45-minute drive from Kovalam, Trivandrum - its full name Thiruvananthapuram - is Kerala's capital and largest city (958,000, metro 1.7 million), complete with distinguished British colonial architecture, many art galleries, and lots of parks and green spaces (leading to the nickname "Evergreen City of India"). Don't miss checking out highlights such as ancient Padmanabhaswamy Temple (above, one of the country's wealthiest) as well as the Natural History Museum and the Napier Museum of art and archaeology.